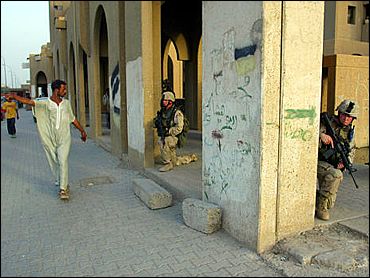 Amid heavy gunfire and explosions, American forces battled Iraqi militiamen on Thursday near a shrine that is one of the most sacred sites of Shia Islam. Thick smoke rose over Karbala's city center.

Fighters loyal to radical cleric Muqtada al-Sadr pulled back and regrouped in alleyways north of Imam Hussein shrine, and U.S. soldiers were positioned west and south of the site. Smoke wafted over the golden dome of the shrine, apparently from a nearby a power generator that had been set afire.

Fighting also raged near the city's Imam Abbas shrine. American forces are concerned that any damage to the two shrines could enrage Iraq's majority Shiite population as the United States tries to stabilize Iraq ahead of a transition to sovereignty on June 30.

Insurgents fired two mortar rounds in central Baghdad on Thursday. The first fell near the office of the International Committee of the Red Cross, breaking glass in an adjacent building. The ICRC withdrew most foreign staff from Iraq after a deadly blast at its Baghdad headquarters last year.

Also Thursday, a rocket landed in a gas plant at the Dora oil refinery in Baghdad, injuring a worker and triggering a blaze that firefighters quickly extinguished. Dora is the biggest oil refinery in the capital.

On Wednesday, a bomb exploded beside a U.S. military convoy in Baghdad, killing one U.S. soldier and injuring another, the U.S. military said.

A total of 774 U.S. service members have died in Iraq since the beginning of military operations last year. Of those, 564 died as a result of hostile action and 210 died of non-hostile causes.