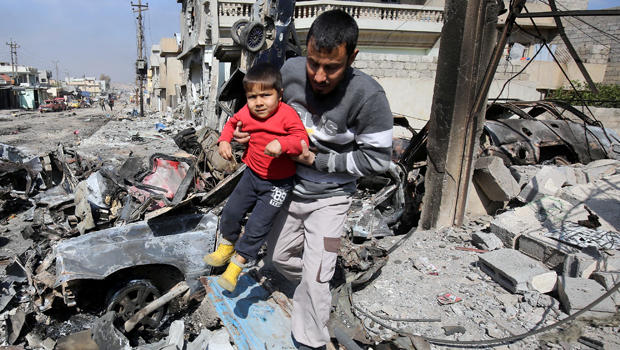 MOSUL, Iraq -- This is a part of the world so ancient it’s mentioned in the Bible. Now it’s been brought to its knees.

Mosul is being shattered as Iraqi forces pound fighters from the Islamic State of Iraq and Syria (ISIS) in the long-awaited campaign to take back the city. ISIS forces captured Mosul in 2014.

On Thursday, residents of this once-wealthy city fled with their bundles of possessions, sometimes, with just the clothes on their backs.

In the Al-Dawasa neighborhood about 150 yards from the front line, Muhammed Yunus had made it to to safety with his young family. He said ISIS fighters are hiding in people’s homes. Four had occupied his house, he said, before it was struck by a mortar.

As the Iraqis claw back one street at a time, ISIS has smashed through the walls of homes in order to move from house to house without being detected from the sky.

Iraqi forces claimed they’d recaptured Mosul’s main government building on Tuesday. But on Thursday, reporters weren’t allowed within a block of it. Brigadier General Shakar Al Khafaji said ISIS is still sniping at his forces, contesting every inch of territory even as the fighters retreat.

When ISIS is finally pushed out of Mosul -- which could take weeks -- scars will remain.

Hassan Ali fled the city with his wife Hala and five children, but said they had to leave behind the body of his father, who died a week ago.