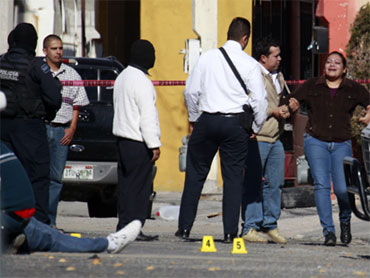 This year's death toll in drug-related violence in the border city of Ciudad Juarez, the hardest hit by Mexico's drug war, rose to 3,000 Tuesday after two men were shot dead on a street, authorities said.

Ciudad Juarez has seen its homicide rate rise to one of the highest in the world after vicious turf battles broke out between gangs representing the Juarez and Sinaloa drug cartels in 2008.

With prosecutors' spokesman Arturo Sandoval announcing the latest grim milestone, a total of 7,386 people have died in the city of 1.3 million people across the border from El Paso, Texas, in three years. Most were members of rival drug gangs, but civilians, police and recovering drug addicts have also been targeted.

More than 28,000 people have died throughout Mexico in the four years since President Felipe Calderon launched an offensive against drug cartels when he took office in December 2006.

The extraditions "represent another victory in our joint fight against organized crime," the embassy said.

And touting Mexico's own successes in the offensive, Calderon said Tuesday that a big party led to the demise of a drug cartel chief, who was killed in a shootout with federal police.

The La Familia gang invited hundreds of people to a party last week in the western city of Apatzingan and didn't bother to keep it a secret, Calderon said in an interview with W Radio.

Federal police learned about it and the shootout broke out when they arrived to investigate, he said. The government says that La Familia leader Nazario Moreno, nicknamed "The Craziest One," was killed in battles that lasted two days and spread to key parts of Michoacan state, with gunmen blockading roads with burning vehicles.

"What happened those days is that we gave La Familia cartel the biggest blow in its history," Calderon said. "With a certain amount of insolence, they organized a party, a gathering of hundreds of their people. ... Everyone found out about the party."

The government says cartel gunmen fled with their dead during the shootouts, and Moreno's body has not been recovered.

After Calderon spoke, the lower house of Mexico's Congress voted 384-2, with 21 abstentions, to rescind the congressional immunity from prosecution of a fellow legislator accused of links to La Familia.

Congressman Cesar Godoy Toscano has denied the accusations, although tapes have surfaced in which he allegedly chats with a man identified as a leader of the cartel.

Godoy Toscano already faces federal charges for allegedly protecting La Familia, but congressmen in Mexico are given immunity from arrest while in office. Tuesday's vote suspended him from Congress, but provided that he can return to office if he is acquitted or the charges are dropped.

While Godoy Toscano had filed an appeal against his arrest on the first set of charges, which is still working its way through the courts, the Attorney General's Office said Tuesday it will file a second set of charges against him alleging money laundering.

A statement by the office did not give specifics of the new charges, or any indication of whether allegedly laundered money may have been used in Godoy Toscano's election campaign.

The congressman was not present at the vote, and his whereabouts were unclear.

La Familia has been the most flamboyant of Mexico's drug cartels. The gang claims it is trying to protect Michoacan - Calderon's home state - from other cartels and common criminals, a message it touts in banners and even in occasional interviews with the news media.

The gang has not bothered to lower its profile since Moreno's reported death. Sympathizers - some with small children - have marched repeatedly in Apatzingan and the state capital of Morelia, carrying signs supporting the capo and demanding the withdrawal of federal forces.

On Tuesday, the Interior Department issued a statement saying such demonstrations show only the cartels' "incipient penetration of some local sectors, but not any social support for crime and its tactics."

Later, in a rare joint statement, federal police, prosecutors, the army and navy urged all three levels of government - local, state and federal - and all three branches of government to work together against drug cartels.

The statement said La Familia members "are nothing more than criminals whose only intention is to terrorize and attack society."

"Far from protecting Michoacan residents from crime, they deeply hurt them. They commit murders, extortion and kidnappings," the statement added.

Moreno, 40, the dead drug lord, was considered the ideological leader of La Familia, setting a code of conduct for members that prohibits using hard drugs or dealing them within Mexican territory.

He reputedly handed out Bibles and money to the poor, and wrote a religiously tinged book of values for the cartel, sometimes known as "The Sayings of the Craziest One."

The gang, specializing in methamphetamine, is also known as one of Mexico's most vicious. La Familia emerged as an independent organization in 2006, announcing its split from the Gulf cartel when it rolled five severed heads into a nightclub in the city of Uruapan.

Soon afterward, Calderon deployed thousands of federal troops and soldiers into Michoacan, a crackdown he quickly extended to other cartel strongholds in northern and western Mexico. Several top drug lords have been brought down but gang violence has soared to unprecedented levels, claiming more than 28,000 lives in four years.

"I'm a Michoacano and the situation of the state hurts," Calderon said. "We cannot allow the law of a cartel to rule a state."

Also Tuesday, the Mexican navy reported it seized nine go-fast boats and a total of 16.5 tons of marijuana during two days of searches in the Gulf of California.

The navy said in a statement that patrol aircraft detected three suspicious boats near an island just off the coast of Baja California state on Dec. 11. The three boats were later found abandoned, with 512 packages of marijuana on board.

Two days later, a search by land, air and sea detected six other boats and six suspects in a nearby town. Those boats were carrying 1,058 packages of marijuana.