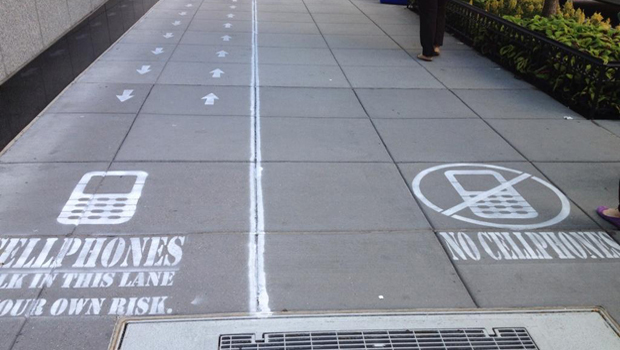 We've all run into them on crowded city sidewalks, often literally. Those oblivious individuals who stride down our shared urban walkways while talking or texting, often bumping into strangers, tripping over small children, or having close encounters with local wildlife. What if we could relegate obsessive multitaskers to their own lane, freeing up half the concrete for fully alert pedestrians?

That's the premise of an upcoming National Geographic Channel show that created a "No Cellphones" lane on a Washington, DC, sidewalk as part of a social experiment.

Judging by early reports and reactions on Twitter, cell-based segregation seems to be a failure, at least early on.

According to Yahoo, a TV crew for a show tentatively titled "Mind Over Masses" divided one block of sidewalk into two lanes, one marked "No Cellphones" and the other labeled "Cellphones: Walk In This Lane At Your Own Risk." The cellphone-friendly lane was further subdivided with helpful arrows attempting to show talkers and texters where to walk depending on their chosen direction of ambulation.

Yahoo's Rob Pegoraro spent about an hour with the crew as they filmed the public's interactions with their stunt sidewalk. Pegoraro observed that very few people actually paid any heed to the lanes, except to pull out their phones and take a picture. And, of course, those who were actually using their phones also paid no attention to the lanes, because, well...they were too busy talking or staring at their phones.

None of the photos out of DC this week show where the TV crew put their"Glassholes Only" lane, but one has to assume it was somewhere near the middle of the street.