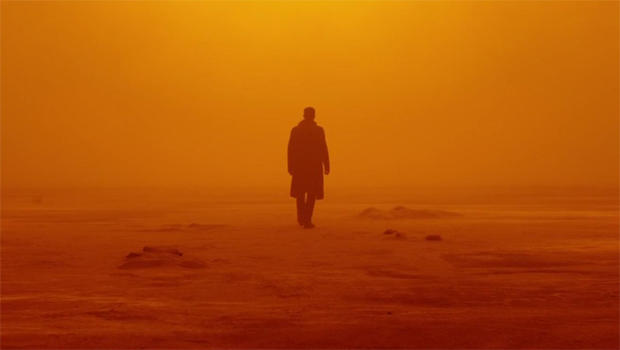 He received a standing ovation at the Dolby Theatre in Hollywood as he received the award. "The idea of following up that original film was a little scary, to say the least, yeah," Deakins said Sunday.

Ridley Scott's 1982 "Blade Runner" (shot by Jordan Cronenweth) is regarded as one of the most beautiful movies ever made. When asked whether he had tried to pay homage to the original, Deakins replied, "I think you do in a way, because it's all part of your kind of film memory, if you like. ... Whether you're aware of the film that went before it, it's like, I couldn't light like Jordan. I mean, I think what he did on that film was stunning, but I'm a different person, and I kind of see things slightly differently."

View clips below from "Blade Runner 2049" and from other examples of Deakins' peerless work.

In this scene below, set in a wasteland that was once Las Vegas, a policeman, K (Ryan Gosling), and Deckard (Harrison Ford) come under attack by agents seeking Deckard and the central figures of a replicant resistance movement.

This clip features a compendium of haunting imagery from "Blade Runner 2049," for which Roger Deakins received this year's Academy Award.

Born in 1949 in Torquay, England, Deakins studied graphic design, photography and film before working as a cameraman for documentaries, and shot early music videos, before expanding to narrative features, including Michael Radford's wartime romance "Another Time, Another Place" (1983).

After several impressive credits, including "Sid and Nancy," "White Mischief," "Mountains of the Moon" and "Air America," Deakins began a long collaboration with Joel and Ethan Coen, with 1991's "Barton Fink." Set in a hellishly-warm L.A. hotel, where screenwriter Barton Fink (John Turturro) toils on a wrestling epic, the air is palpably thick, and warm enough to make wallpaper peel off the walls.

Deakins received his first Academy Award nomination for the 1994 prison drama "The Shawshank Redemption." In this scene, we witness Tim Robbins' Andy Dufresne, sentenced to life for murders he didn't commit, entering the prison, all hope fading around him.

After shooting the Coen Brothers' "Fargo," Deakins traveled to Morocco to shoot Martin Scorsese's "Kundun," the life story of the Dalai Lama.

Though Deakins maintained his preference for shooting on film stock even as more movies were going digital, his work on the Coen Brothers' "O Brother, Where Art Thou?" was revolutionary for the digital age. After scanning the camera negative, the film was edited and color timed in the digital realm, artificially altering the colors throughout to create a de-saturated, autumnal glow. In addition to the glorious look of the film, it was the first time that a digital internegative master copy of a color-timed film was produced.

Deakins and the Coens used a digital post-production scheme to convert the color photography of "The Man Who Wasn't There" into black-and-white. Partly this was for practical reasons (fewer labs were capable of processing black-and-white stock), but it also gave Deakins enormous control over contrast.

In this tense, quiet scene from the Coens' "No Country for Old Men" (2007), Deakins uses tiny pools of light and some telling shadows to depict the jeopardy facing Josh Brolin's character being hunted by a hired killer.

The same year as "No Country for Old Men" -- a contemporary western -- Deakins shot one of his most beautiful works, director Andrew Dominik's "The Assassination of Jesse James by the Coward Robert Ford." In this scene, James and his gang hijack and rob a train at night.

Deakins' use of cool and warm light sources to underscore conflict can be appreciated in this scene from the drama "Doubt," in which Father Brendan Flynn (Philip Seymour Hoffman) protests the actions of Sister Aloysius Beauvier.

In this scene from the Coens' period western "True Grit" (2010), Mattie Ross (Hailee Steinfeld)  demonstrates her own particular style of true grit. There is no fussiness to the lighting, with seemingly natural sources used, though Deakins was skilled at making scenes such as this look as if no artificial lighting were used.

After shooting on digital for the first time on the science fiction film "In Time," Deakins shot the James Bond film "Skyfall" with the Alexa ALEV III. Deakins' shooting of Bond's fight with an assassin, illuminated only by Translight screens representing skyscraper billboards, is masterful.

In "Sicario," about the drug wars along the U.S.-Mexico border, Deakins used silhouettes and deep shadows of figures in the desert at dusk to create a haunting sense of dread. And when things got really dark -- shooting in a drug-smuggler's tunnel  --  Deakins adapted military-grade night-vision goggles and a thermal camera, and shot without any light at all.