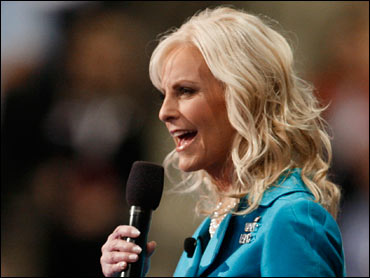 Below are the remarks of Cindy McCain, wife of Republican presidential nominee John McCain, as prepared for delivery at the Republican National Convention in St. Paul, Minn., Sept. 4, 2008:

John and I are so proud of them and so happy to have them here with us tonight.

Nothing has made me happier or more fulfilled in my life than being a mother.

But while John and I take great joy in having been able to spend time together this week as a family, our hearts go out to the thousands of families who have had to leave their homes once again due to devastating weather.

It is not only our natural instinct to rally to them, to lift them up with our prayers and come to their aid, it is also our duty to our country.

That duty is what brings me before you tonight. And it's much larger and more important than just me or John or any of us: It's the work of this great country calling us together - and there is no greater duty than that, no more essential task for our generation -- right now.

That's been very much on my mind these last few months as I traveled our country.

Each day, after the bands packed up, the speeches were done, and the camera lights darkened, I always came back to how blessed and honored I was to be part of our national conversation.

And in these times, when so many of our fellow Americans face difficult situations, what I saw moved me deeply.

Families worried about losing their homes.

Towns deserted by industries once at their center.

Mothers with no choice but to send their children to unsafe and underperforming schools.

But I have also seen the resilience of the American people. I've heard stirring stories of neighbor helping neighbor, of cities on one end of the country offering help to fellow citizens on the other.

Despite our challenges our hearts are still alive with hope and belief in our individual ability to make things right if only the Federal government would get itself under control and out of our way.

So tonight is also about renewing our commitment to one another.

Because this campaign is not about us. It's about our special and exceptional country.

And this convention celebrates a special and exceptional Republican Party ... the hand we feel on our shoulder belongs to Abraham Lincoln.

Our country was born amidst the struggle for freedom ... and our party arose from a great battle for human rights, dignity, and equality for all people. We give way to no one and no other party in that cause.

From its very birth, our party has been grounded in the notion of service, community and self-reliance ... and it's all tempered by an uniquely American faith in - and compassion for - each other's neighbors.

A helping hand and friendly support has always been our way. It's no surprise that Americans are the most generous people in history.

That generosity of spirit is in our national DNA. It's our way of doing things. It's how we view the world.

I was taught Americans can look at the world and ask either: what do other countries think of us ... or we can look at ourselves and ask: what would our forefathers make of us and what will our children say of us? That's a big challenge. In living up to it, we know the security and prosperity of our nation is about a lot more than just politics.

It also depends on personal commitment, a sense of history and a clear view of the future.

I know of no one who better defines how to do that ... whose life is a better example of how to go about that than the man I love and with whom I have shared almost 30 years of my life:

From the beginning of time, no matter how accomplished in other fields, women have always sought a husband with an eye to what kind of father that man would be.

Well, I hit a home run with John McCain!

I got the most marvelous husband and friend and confidant ... a source of strength and inspiration ... and also the best father you could ever imagine.

In that most sacred role, he brought to our children his great personal character ... his life-long example of honesty... and his steadfast devotion to honor.

He has shown the value of self-sacrifice by daily example and, above all... John showers us with the unconditional love and support every family dreams of. I know what his children say of him.

And his courageous service to America in war and peace leaves no doubt what our forefathers would make of him!

It's these virtues of character that led him to this campaign, to this moment.

John McCain is a steadfast man who will not break with our heritage ... no matter how demanding or dangerous the challenges at home or abroad.

And let's not be confused: these are perilous times, not just for America, but for freedom itself.

It's going to take someone of unusual strength and character - someone exactly like my husband - to lead us through the reefs and currents that lie ahead. I know John.

You can trust his hand at the wheel.

But you know what, I've always thought it's a good idea to have a woman's hand on the wheel as well.

So how about Governor Sarah Palin!

John has picked a reform-minded ... hockey-mommin' ... basketball shootin' ... moose huntin' ... fly-fishin' ... pistol-packing ... mother of five for vice president. And as a fellow hockey mom myself and a western conservative mother, I couldn't be prouder that John has shaken things up as he usually does!

No one can do the job alone. And that's why I'm glad John will have Governor Palin by his side.

We all to have work together ... build consensus - the way John has done all his life.

His leadership inspires and empowers ... and places ultimate success in all our hands.

I have been witness to great service and sacrifice - to lives lived with humility and grace.

In World War II, my father's B-17 was shot down three times. He was awarded the Distinguished Flying Cross.

But he was quiet about that... and never claimed to have done more than his small share.

I think John was a hero in Vietnam.

But he thinks it was just his turn.

Our son, Jack, will graduate from the United States Naval Academy next year - fourth generation - ready to do his service.

And our son Jimmy - a lance corporal in the Marine Corps - served honorably in Iraq ... as hundreds of thousands of other young men and women just like him are doing for America and freedom everywhere.

The stakes were never more clear to me, than the morning I watched my son Jimmy strap on his weapons and board a bus headed for harm's way.

I was born and raised in the American West and will always see the world through the prism of its values.

My Father was a true "Western Gentleman."

He rose from hardscrabble roots to realize the American dream.

With only a few borrowed dollars in his pocket, a strong back and a can-do spirit, he built a great life for his family.

His handshake was his solemn oath. He looked you straight in the eye and he always believed the best of you unless you gave him good cause not to.

Modest and good-natured, he had deep roots in our American soil.

He taught me life is not just about you - it's also about nurturing the next generation ... preparing a better world for all our children and helping them find the right way up.

We all come to that knowledge in different ways. For me, the great moment of clarity came when I became a mother.

Something changed in me, and I would never see my obligations the same way.

It was after that, I was walking through the streets of Dhaka, Bangladesh, surrounded by terrible poverty and the devastation of a cyclone.

All around me were the children, and the desperate faces of their mothers. The pain was overwhelming ... and I felt helpless.

But then I visited an orphanage begun by Mother Teresa, and two very sick little girls captured my heart.

There was something I could do. I could take them home.

Today both of those girls are healthy and happy. And one of them you just met: our beautiful daughter, Bridget.

Much is expected of a country as blessed as America ... and our people are at work all over the globe ... making it a better planet ... doing their part.

It was my privilege to work with the men and women of the American Voluntary Medical Teams in places like Zaire, Micronesia and Vietnam ... watching as they relieved whole towns from disease ... and rescued countless children from sickness.

The reward for sharing in that work is truly indescribable.

To see a child rescued from a life in the shadows by Operation Smile is to witness and share a joy that is life-changing.

And the challenges go on.

I just returned from the Republic of Georgia, where HALO Trust - an organization specializing in clearing the debris of war - and others, are rescuing innocent victims from landmines and missiles.

Sometimes the courage of others leaves me breathless.

I only need to speak the word Rwanda and the images it conjures are beyond description.

In my box tonight is Ernestine, a woman, a friend, a mother like myself, whom I met in Kigali.

She suffered unimaginable horrors and was made to watch appalling havoc wreaked on her family.

Yet, as the violence in her country subsides, she doesn't seek retribution -- instead, she offers love and seeks reconciliation for her people.

She says, simply, "It's time to move on for me and my country."

Ernestine, would you please stand up?

Your courage is humbling. Your forgiveness is healing. You are my hero.

Forgiveness is not just a personal issue: it's why John led the effort to normalize relations with Vietnam ... to retrieve the remains of our MIAs... to bring closure to both sides.

That's leadership - national leadership. And it's leading by example.

The Presidential contest will begin in earnest when this convention closes.

If Americans want straight talk and the plain truth they should take a good close look at John McCain ... a man tested and true ... ... who's never wavered in his devotion to our country ... ... a man who's served in Washington without ever becoming a Washington insider... ... who always speaks the truth no matter what the cost... ... a man of judgment and character ... ... a loyal and loving and true husband and a magnificent father!

I have loved him with all my heart for almost 30 years ... and I humbly recommend him to you tonight as our nominee for the next President of the United States!

I'm so grateful to have had the chance to speak with you tonight ... and for the honor you are about to grant my husband -- and, indeed, our entire family. I promise you I will work every day to help John strengthen our freedom ... to serve this great country with the honor, dignity and the love it deserves ... from each and every generation it blesses.

May God bless all of you: ... our beloved America ... the citizens of the Gulf Coast ... and all the sons and daughters serving this great country around the world tonight.