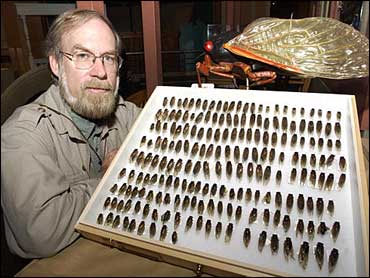 Some folks count down the days until they can go home. Others keep an eye on the number of shopping days until Christmas.

Gene Kritsky counts down the years between cicada invasions, and for him, the wait is almost over.

The first cicada invasion in 17 years began Monday, as trillions of red-eyed insects began crawling their way above ground in 14 states and in Washington, D.C.

Kritsky - a professor at the College of Mount St. Joseph in Cincinnati - has been studying cicadas for decades and in an interview with the web site CicadaMania.org, admits that the arrival of the large, ravenous insects is a bit like a "an old friend coming to visit."

To most people, especially farmers, it feels a lot more like being surrounded by an old foe.

While only bug experts are likely to share Kritsky's zeal, some in cicada country are trying to make the best of things - with parties, limericks, and jokes.

Loudmouthed and ugly, the cicadas will fly clumsily into pets, bushes and unwitting pedestrians as they engage in a frenetic mating ritual that lasts well into June.

Then they'll disappear for another 17 years.

Keith Clay, a biologist and cicada researcher at Indiana University in Bloomington, said the appearance of cicadas is "an amazing biological phenomenon" that nonetheless produces a "yuck factor" for some people.

"They're not scared but see them as disgusting," he said.

The inch and a half-long black bugs with iridescent wings buzz around, but are basically harmless. They don't bite, and they don't sting. They live above ground as adults for about two and a half weeks to reproduce all they can before dying.

The adult males begin the mating ritual with a long buzzing sound that attracts the females. The chorus from one colony's male insects is so loud that the insects can drown out outdoor wedding events, graduation ceremonies and golf tournaments, researchers say.

Scientists say this year's batch, the largest of the cicada groups that appear at various intervals, offers researchers a rare opportunity to study the insect's impact on the nation's forests. Recent studies indicate cicadas are growing in numbers due in part to deforestation.

Cicadas tend to thrive in sunlit forest edges, which often provide the warmer weather and younger trees most ideal for them to lay their young. That's because younger tree roots can sustain the 17-year feeding cycle of nymphic cicadas until they mature.

There are more than a dozen broods of 17-year cicadas, along with several 13-year varieties. This year's group, Brood X, is the largest and is concentrated in the Midwest and the mid-Atlantic.

Found only in the United States east of the Great Plains, the periodical cicadas burrow into the ground after hatching, some digging as far as 8 feet under. Below the earth, the nymphs slowly suck the sap from tree roots for nourishment.

After 17 years, they emerge and climb trees and shrubs, where they shed their crunchy skins and harden into maturity.

Sheer numbers is what ensures locusts' survival. The insects are a treat for robins and other birds, and even some pets, who are at risk for diarrhea or constipation if they eat too many. But many cicadas escape death because there are simply too many in the swarm for even the hungriest to devour.

Once the bugs mate, the females cut slits into tree branches, where they deposit 400 to 600 eggs. The adults quickly die, but the eggs hatch in a few weeks. The young cicadas dig into the ground and won't emerge into 2021.