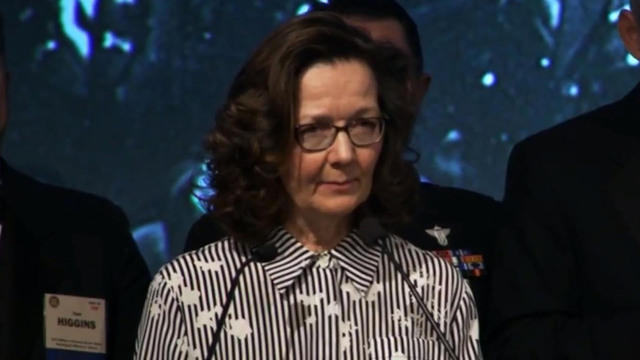 The Central Intelligence Agency has declassified and sent to Congress an eight-page disciplinary review memorandum that cleared President Trump's nominee to lead the agency, Gina Haspel, of any wrongdoing in the destruction of videotapes made of interrogations of al-Qaeda detainees at secret "black site" prisons in 2002.  It is the latest step in the agency's ongoing efforts to cast light on some of the darkest parts of own past and on that of its potential future director.

The memorandum, obtained by CBS News, was written in 2011 by former CIA acting director and CBS News contributor Michael Morell at the request of General David Petraeus, who led the agency at the time. It places responsibility for the destruction of 92 tapes on Jose Rodriguez, Jr., then the head of the agency's directorate of operations, while noting Haspel drafted the cable authorizing the measure.

"I have found no fault with the performance of Ms. Haspel," Morell's report says. "I have concluded that she acted appropriately in her role as Mr. Rodriguez's Chief of Staff."

"[Haspel] drafted the cable on the direct orders of Mr. Rodriguez; she did not release that cable. It was not her decision to destroy the tapes; it was Mr. Rodriguez's," it says.

The memorandum also says Haspel "incorrectly" believed that Rodriguez would obtain approval for releasing the cable from the then-head of the agency, Porter Goss, and followed up with Rodriguez after it had been sent.

"I have found fault with the performance of Mr. Rodriguez, and I have decided to issue to him a letter of reprimand to remain in his official personnel file for two years," Morell writes, though Rodriguez did not face additional sanctions.

In part, the memo says, this was because Rodriguez had served the agency with distinction for 31 years and had demonstrated candor about why he made the decision to destroy the tapes. Rodriguez has said he acted out of a belief that CIA officers' lives were at risk because some of them were clearly shown in the tapes, and that the world's reaction to leaked, graphic images depicting US Army guards abusing detainees at Iraq's Abu Ghraib prison in 2004 reinforced that belief.

The memo also suggested officials above Rodriguez, and the resulting breakdown in the chain of command, were ultimately blame.

"The leadership of the Agency failed Mr. Rodriguez," it says. "Because no effort was undertaken by CIA leadership to tackle the issue at the policy level, Mr. Rodriguez was left believing, rightly or wrongly, that he had no other choice but to act on his own authority."

The head of the agency then was Porter Goss, a former House Intelligence Committee chairman who, the report notes, took no action to reprimand Rodriguez at the time. "This appears to have been a conscious decision on the part of Director Goss," the memo says, and that inaction on his part and on that of the White House suggested Rodriguez's actions were not seen "as insubordination or even a significant error in judgment."

Goss is also faulted in the memo for failing to notify congressional oversight committees of the tapes' destruction, which, according to subsequent accounts of the matter, Goss said he intended to do. "I do not hold Mr. Rodriguez accountable for this failure," Morell wrote, "as it was ultimately the responsibility of the director."

The review memorandum was the result of one of several investigations launched in the aftermath of the tapes' destruction. A nearly three-year criminal investigation, led by special prosecutor John Durham and concluded in 2010, resulted in no charges against Rodriguez, Haspel or any other CIA officer. The accountability report was written after the Justice Department concluded its investigation.

The CIA has been slowly and systematically pulling back the curtain on Haspel, releasing limited information about the contours of her career and a smattering of her interests, describing her as a polyglot Johnny Cash fan who reads Jane Austen novels and who, over three decades spent in the agency's clandestine service, distinguished herself while serving in some of the most dangerous countries in the world.

But as more details about Haspel have emerged, so have criticisms of what is still secret. While most members of the Senate Select Committee on Intelligence have maintained a public ambivalence about how they will vote on Haspel's nomination, several - including Senators Wyden, D-Oregon, Heinrich D-New Mexico and Feinstein, D-California - have expressed impatience and displeasure that repeated requests for more declassified information on Gina's career have gone unanswered. In an April 16 letter - the fifth of its kind sent to CIA, the senators said - they criticized the agency for what they called a "public relations campaign" spinning a "superficial narrative" about the nominee.

"In the absence of any meaningful declassification of her career, this public campaign on behalf of Ms. Haspel does a great disservice to the American people, who expect and deserve to understand the backgrounds of their government's leaders," they wrote.

This memorandum's release appears to be part of CIA's efforts to provide a more substantive response. "At the request of members of the Senate Select Committee on Intelligence, and consistent with its commitment to be as transparent as possible, CIA has declassified, with limited redactions, the 2011 disciplinary review memorandum relating to CIA's destruction of tapes," said CIA spokesman Ryan Trapani.

In a statement issued after the memo's release, Sen. Wyden called it "highly incomplete," and said it raised, rather than settled, questions about Haspel's involvement. "The administration needs to release much more information about this episode, including the extensive record described in the Morell report," Wyden said.

Sen. Feinstein soon followed suit, calling the CIA's selective declassification of material favorable to Haspel "completely unacceptable." "The CIA has not been forthcoming," she said, "Senators and the public need to know more about her record."

Beyond Congress, a movement countering Haspel's nomination has also grown and gained momentum in recent weeks. On Thursday, a group of forty faith, progressive and human rights organizations, including Human Rights First and CODEPINK, sent a letter to congressional leaders urging them to oppose Haspel's nomination. "[A]ny vote related to her nomination," they wrote, "will be seen as a referendum on torture."

"The problem with something like torture is that words are imperfect tools to convey pain and suffering and anguish," said Alberto Mora, former general counsel of the Navy and Marine Corps and a senior fellow of Human Rights First, a signee of the letter. The destruction of the tapes "prevented the American people and the courts and the congress from understanding the nature of what CIA was engaged in," Mora said.

Morell also said his report was shared with both the White House and Congress at the time it was submitted. "There were no follow-up questions from either," he said.

Rodriguez, in a statement posted on his own website, said, "I have consistently taken full responsibility for the destruction of interrogation tapes from the very beginning," noting he had given interviews to 60 Minutes and other documentaries on the matter and detailed his decision in his own book.

"My primary motivation in ordering the destruction of the tapes was to do what many in the intelligence community and the White House had failed to do at the time: protect the identities of the CIA personnel whose faces were seen on those tapes."

"Nobody ever gave me an order not to destroy them," Rodriguez wrote, "I did what no one else in government was willing to risk doing."