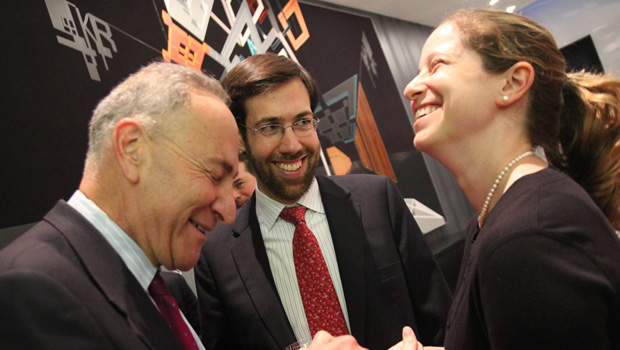 For singles looking for love and marriage, it isn't always obvious when it's a match. That's where the high-profile matchmaker Mo Rocca's been talking to works a little magic:

With all the partisan bickering that goes on, it seems no one on Capitol Hill is getting along. But then there's New York Senator Charles Schumer's office, which might as well be called "the love shack." So far, 22 of his staffers have paired off.

"There are two spins on all these Schumer marriages," said the senator. "One is, we are the closest-knit staff on the Hill. The bad spin is, we work so hard that they don't have a chance to meet anybody else!"

Schumer doesn't take issue with his staffers dating. In fact, he endorses it!

"When you get to know someone at work, you get to know the real deal, as opposed to, when you sit down at a restaurant or something on a date, where everyone's nervous and saying, 'What are they gonna think of me?' and all that."

Schumer won't call himself a matchmaker, or a yenta. He's just there to give a helpful nudge.

"When I see, you know, two single people who might be good for each other -- I'm not the most subtle guy in the world, but I try as subtly and as gently as I can, 'Oh, she's nice, he's nice.'"

"I think he never really inquired until it was time where he thought that maybe we should be getting engaged. And it became, 'Do you know what kind of ring you want? Do you need me to talk to Josh?'" And I said, 'No, thank you!'"

"This was a proposal that the Senator wanted to push through?" suggested Rocca.

"I think he was hoping for passage," said Squadron. "I think part of what he does is take something that's real and make sure it happens. You know, he's not looking at a map of his team and saying, 'Okay, who's next?' That's not what it is at all. When there's a connection, it's a really nice environment for it."

"Would you encourage single people to apply to work for Senator Schumer?"

"Look," said Daniel, "if online dating isn't working for you, this might be another way to do it!"

Schumer, of course, is an enthusiastic wedding guest.

"They're great, happy, lovely, wonderful occasions. The one thing I try to do at all of them is, and it's relevant, we play my favorite song, which is 'It's Raining Men.' "It's raining men, halleluiah!" Turn your umbrellas upside-down, ladies!"

I feel stormy weather moving in
About to begin, about to begin
With the thunder don't you lose your head
Rip off the roof and stay in bed.
- "It's Raining Men" by Paul Jabara and Paul Shaffer

And naturally, after a Schumer marriage come Schumer babies ...

"Everybody knows once you get married, Chuck would like you to have a baby," said Megan Vlasto.

Rocca asked, "Do you know how many kids he'd like you to have?"

"I think as many as humanly possible," said Megan.

So far there are 14 Schumer babies (as the Senator calls them), including the adorable Eddie Vlasto.

"So in a sense, he co-sponsored your son?" said Rocca.

"We know it was the two of you who made your son, just to be clear!"

Elizabeth and Farrell Sklerov even have a dog. "Schumer, give me a paw. Schumer, up! Lie down, Schumer!"

And Rocca had one last thing to clear up with the senator: "Will the public ever hear you sing 'It's Raining Men'?"