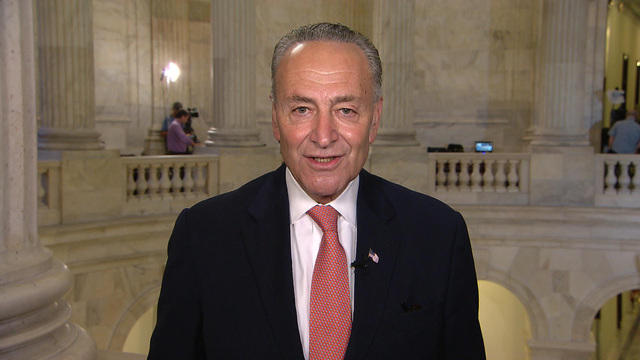 Senate Minority Leader Chuck Schumer suggested Wednesday that President Trump isn’t following through on the promises he made, which the president outlined in his first address to Congress Tuesday night.

“With Donald Trump, the speeches don’t mean very much because what he says in his campaign, at the inauguration, last night -- aren’t attached to his own reality,” the New York Democrat said in an interview on “CBS This Morning.”

“His speeches are populist. They’re aimed at the working folks who supported him. But his governing and what he does is hard-right, favoring special interests over the working class,” he added.

Schumer said that Mr. Trump discussed his desire for an infrastructure plan, but that the president hasn’t reached out to Democrats after they unveiled a proposal last month.

“We haven’t heard a peep out of him,” Schumer said.

Schumer also noted that the president is promising to be tough on trade, and yet he hasn’t fulfilled his campaign promise to label China a currency manipulator.

“Actions speak louder than words,” Schumer said. “He has not done anything to unite. He’s not calling us saying, ‘What do you think?’ He’s not making his proposals down the middle.”

Asked more specifically about the president’s $1 trillion infrastructure plan involving public-private partnerships, Schumer suggested Democrats would oppose it. He said that the plan the president’s advisers have floated involve 82 cents on the dollar going to financiers, which he said would leave very little money to build roads and it would require tolls to pay back the private lenders.

“We can’t work with that,” Schumer said.

On Tuesday night, when the president brought up the creation of a new Victims of Immigration Crime Engagement, known as VOICE, there were audible groans from Democrats in the House chamber.

“I think that office is ridiculous,” Schumer told CBS. “The overwhelmingly majority of immigrants are law-abiding.”