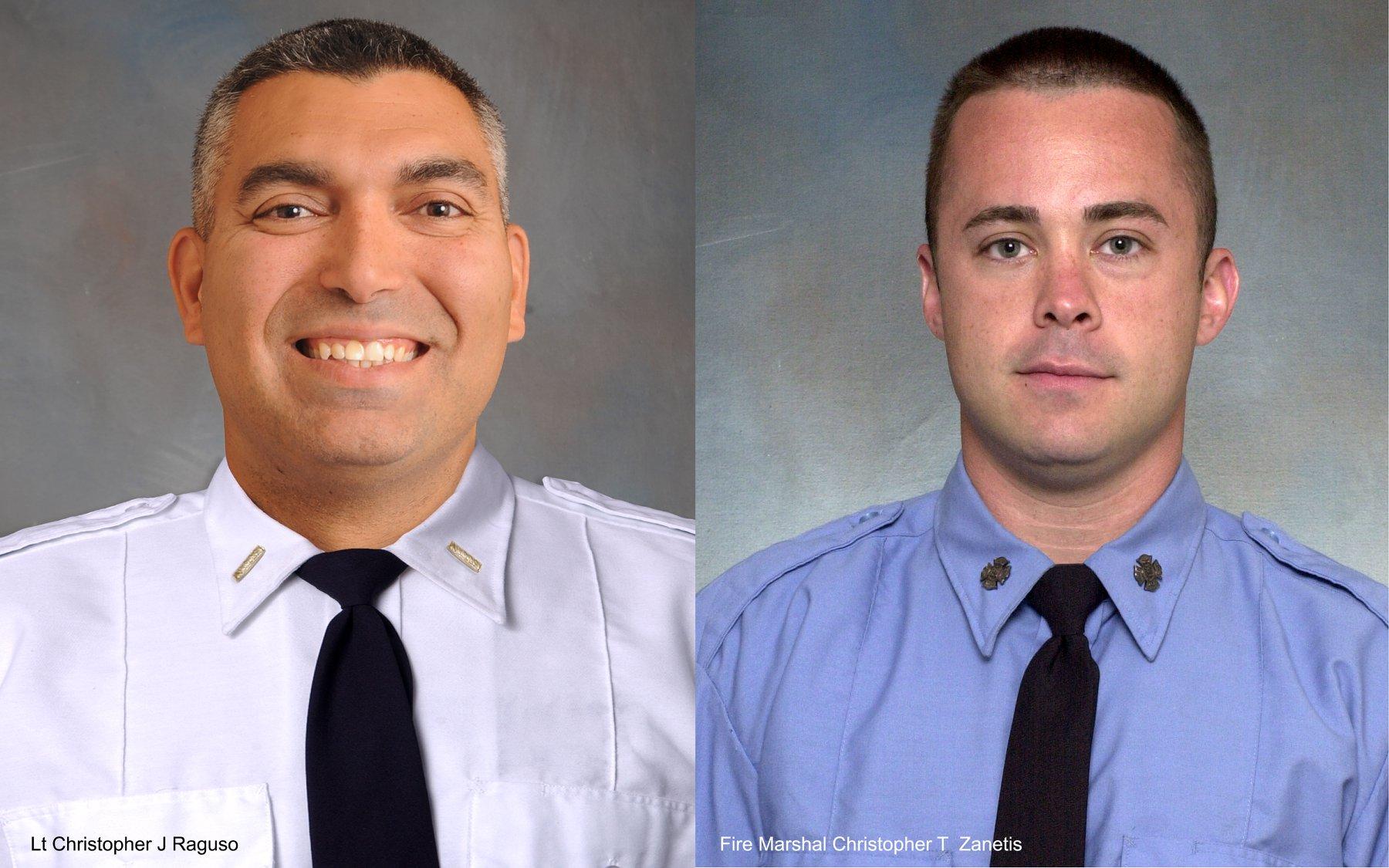 "Lt. Raguso and Fire Marshal Zanetis bravely wore two uniforms in their extraordinary lives of service – as New York City Firefighters and as members of the United States Armed Forces," Nigro said. "The hearts and prayers of the entire Department are with their loved ones and with the families of their five fellow service members who lost their lives defending our country."

"They are truly two of New York City's bravest – running into danger to protect and defend others, both in New York City and in combat overseas," de Blasio said. "On behalf of all New Yorkers, I extend my deepest condolences to their families, loved ones, and fellow service members and FDNY members."

Raguso had been with the FDNY since 2005 and was cited for bravery and life-saving actions six times as an individual firefighter or as part of a unit.

Zanetis had been a firefighter since 2004 and was promoted to Fire Marshal in 2013. He was recognized for bravery as part of an investigative in 2014.

Raguso also served as a lieutenant in the volunteer fire department in suburban Commack, where he lived. The Commack Fire Department said in a statement that it has lost "a great American patriot, friend and brother."

Members of the 106th Rescue Wing of the Air National Guard based out of nearby Westhampton, N.Y., in Suffolk County, are amongst those that died, CBS New York reports.

"I am heartbroken to learn of reports that seven service members lost their lives last night in a tragic helicopter crash in Iraq.  At least one of these heroes served in the New York Air National Guard, 106th Rescue Wing in Suffolk County. The service members in this unit selflessly deploy around the world to provide combat search and rescue coverage for United States and allied forces, " Suffolk County Executive Steve Bellone said. "This tragedy serves as a stark reminder of the sacrifices our heroes in uniform face every day.  My sincere condolences are with the family members and I ask that all New Yorkers keep them in your thoughts and prayers during this difficult time."

The crash did not appear to be the result of enemy activity and is under investigation, the Pentagon said.

"This tragedy reminds us of the risks our men and women face every day in service of our nations. We are thinking of the loved ones of these service members today," said U.S. Army Brig. Gen. Jonathan P. Braga, director of operations in the fight against IS in Iraq and Syria.

The helicopter was used by the Air Force for combat search and rescue, and was in transit from one location to another when it went down Thursday afternoon near the town of al-Qaim in Anbar Province.

The Pentagon said an accompanying U.S. helicopter immediately reported the crash and a quick-reaction force comprised of Iraqi security forces and Coalition members secured the scene.

The Pentagon says the crash is under investigation.

The U.S.-led coalition battling insurgents of the Islamic State of Iraq and Syria (ISIS) has an outpost in al-Qaim, which is located near the Syrian border. The anti-ISIS campaign accelerated through much of last year, as coalition and Iraqi forces battled to take back a string of cities and towns.