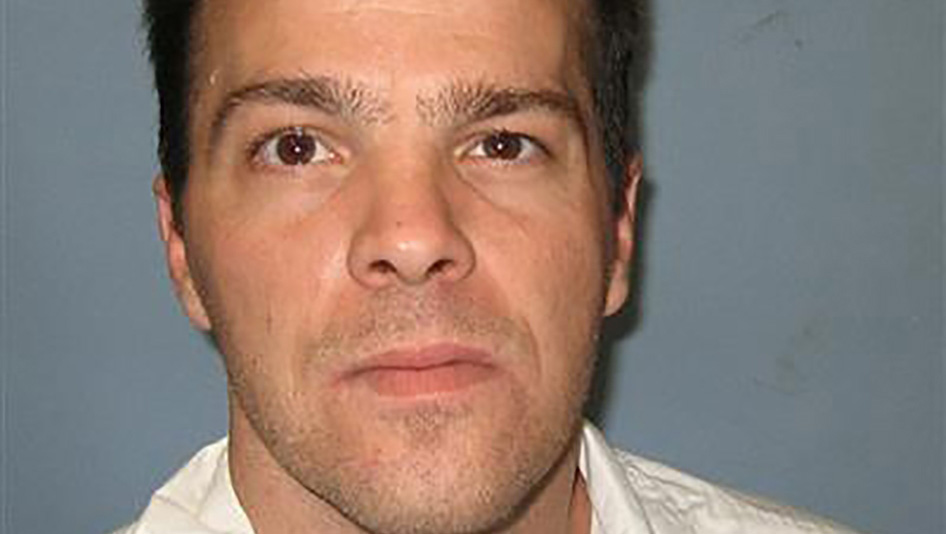 ATMORE, Ala. -- A man convicted of the 1992 rape and beating death of a woman received a lethal injection Thursday evening in Alabama's first execution in more than two years.

Christopher Eugene Brooks, 43, was pronounced dead at 6:38 p.m. at the Holman Correctional Facility in Atmore, authorities said. The procedure began at 6:06 p.m., shortly after the U.S. Supreme Court denied a last-minute defense request for a stay.

Brooks was convicted of capital murder in the death of 23-year-old Jo Deann Campbell, a woman authorities say he first met when they worked at a camp in upstate New York.

Prior to a three-drug combination being administered, Brooks had some final words, saying: "I hope this brings closure to everybody." He thanked his loved ones repeatedly, adding "love you all ... I will take you with me in my heart ... I love y'all. Bye. I love y'all."

A prison chaplain held Brooks' hand and appeared to pray with him as the first drug, a sedative, began flowing. Brooks' eyes closed, his mouth gaped open and his breathing slowed. A prison captain pinched the inmate's upper left arm and pulled open his eyelid to check for consciousness before the final two drugs were administered.

Authorities said it was the first execution since Alabama announced in 2014 that it was changing two of the three drugs, including switching to the sedative midazolam to render an inmate unconscious.

"I think all of us would love to hear him say, 'I did this. I'm sorry.' But that may not ever come, and that's probably reality," Campbell said. "So I forgive him. I did that a long time ago. It's the only way I can live, to get through every day, is just to forgive him."

The victim's mother, Mona Campbell, said afterward in a written statement that the execution offered her no closure, but it did end the appeals that had been stressful to her family for 23 years.

"This execution did not and will not bring back my precious youngest daughter who I loved with all my heart," the statement said. Mona Campbell witnessed the execution along with two other daughters. "My hope is that Brooks, who has done this horrible inhumane act, has made his peace with God."

Three of Brooks' attorneys were in the witness chamber, along with a spiritual adviser and two friends, one of whom sobbed quietly throughout.

A jury convicted Brooks in 1993 of capital murder for murder committed in the course of a robbery, burglary and rape.

Prosecutors said Campbell let Brooks spend the night of Dec. 30, 1992, in the living room of her Homewood apartment after the old acquaintance showed up at the restaurant where she worked. The next day, police found Campbell's partially clothed body under the bed in her apartment in the Birmingham suburb of Homewood. Prosecutors said she was bludgeoned with an 8-pound dumbbell and sexually assaulted.

Brooks' bloody fingerprint was on a doorknob in Campbell's bedroom and a latent palm print on her ankle, according to court records. The documents say Brooks was found later with Campbell's car keys and had cashed her paycheck.

A prosecution witness said semen on the victim's body was consistent with Brooks' DNA.

The new drug combination was the subject of last-minute legal wrangling to halt the execution.

Lawyers for the state have argued Alabama's new drug combination is "virtually identical" to one Florida has used multiple times without incident. But attorneys for Brooks had argued that midazolam was used in problematic executions, including one in which an Oklahoma inmate took 43 minutes to die.

Six Alabama inmates contend in an ongoing lawsuit that midazolam is an ineffective anesthetic and that they would feel the effects of the subsequent injections of rocuronium bromide and potassium chloride to stop their lungs and hearts.

Earlier Thursday, U.S. District Judge W. Keith Watkins, responding to a motion by lawyers for the death row inmates, ordered prison officials to retain execution medical records, including data generated by an electronic heartbeat monitor. He didn't say whether inmates' lawyers would get to see those records.

The U.S. Supreme Court - in a split decision in June - allowed Oklahoma to proceed using midazolam.

And on Thursday evening, the Supreme Court denied Brooks' request for a stay without explanation.

Alabama's last execution was in 2013, with drug shortages and litigation preventing executions until now. Andrew Reid Lackey received a lethal injection July 25, 2013, for killing a man during a 2005 robbery.