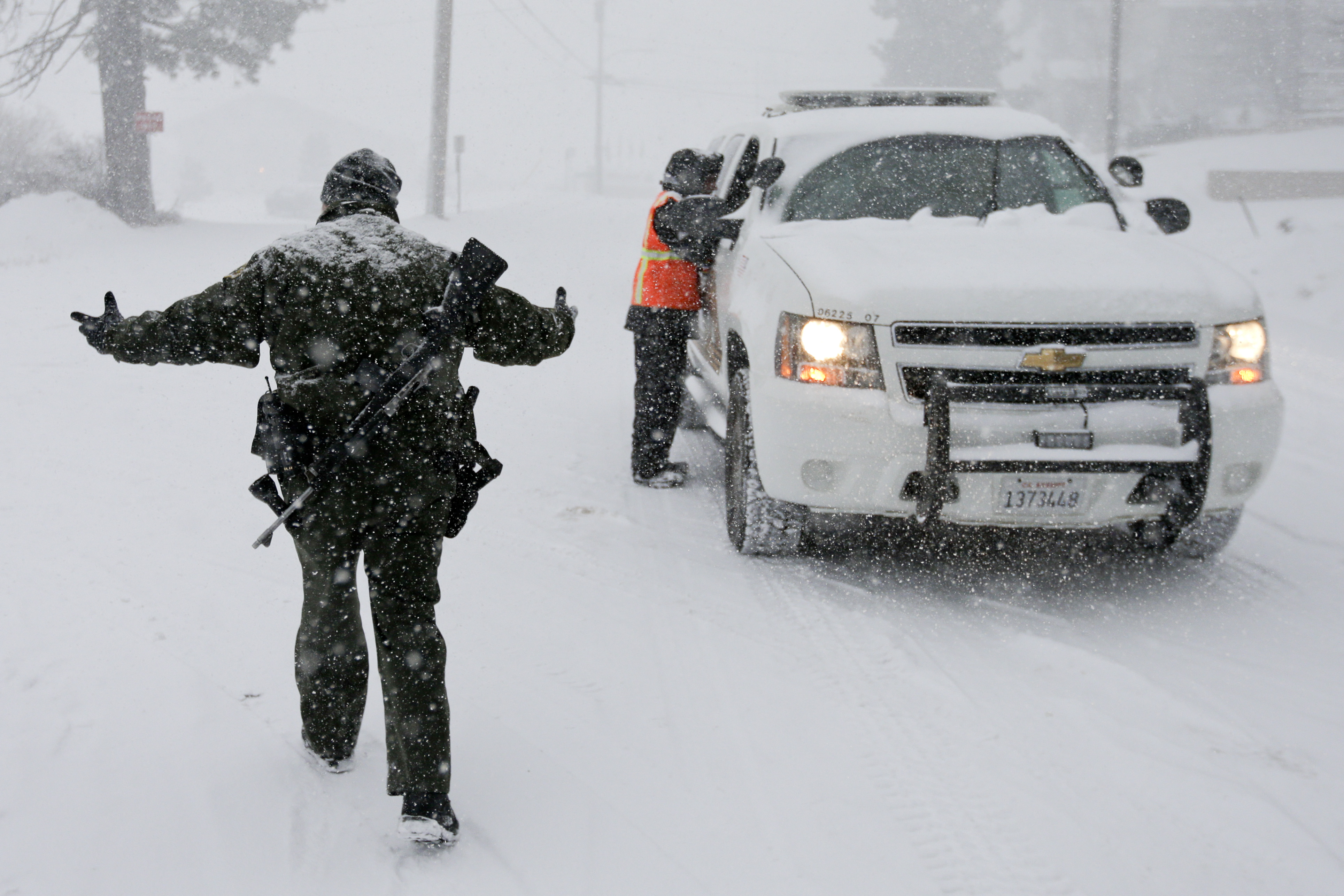 BIG BEAR LAKE, Calif. Law enforcement officers working in falling snow and freezing temperatures searched a Southern California mountain Friday in search of a fired police officer who threatened to bring "warfare" to the Los Angeles Police Department and went on a shooting rampage that left a policeman and two others dead.

More than 100 officers from various agencies were searching for Christopher Dorner in the Big Bear Lake region of the San Bernardino Mountains east of Los Angeles.

Deputies were driven up snowbound roads on Snowcat tractors and armored personnel carriers equipped with snow chains, he said, but helicopters were grounded because of the storm.

"We're going to continue searching until either we discover that he left the mountain or we find him, one of the two," San Bernardino County Sheriff John McMahon said at a midmorning news conference.

A search of dozens of homes in the Big Bear community failed to find Dorner and the search was concentrating farther back in the mountains, near and above the place where his burnt-out pickup truck was found on Thursday, the sheriff said.

Officers followed what appeared to be Dorner's tracks from the truck but lost them on the frozen ground, McMahon said.

"There's a lot of cabins up there that are abandoned. We want to make sure that he didn't find a place to hide out for the night," he said.

CBS News correspondent Ben Tracy reports from Big Bear that authorities admit that the truck could be an elaborate diversion or even a trap.

A couple of reported sightings of Dorner didn't pan out and "we have no information that he's come down into the community at all," McMahon said.

Bear Valley schoolchildren had the day off because of the manhunt.

About 150 miles to the south, up to 16 San Diego County sheriff's deputies spent the night surrounding and searching a rural home after a hoaxer reported Dorner was there. There were people at home but Dorner wasn't one of them, said Lt. Jason Rothlein. Investigators have a pretty good idea who made the call and will be seek criminal charges, he said.

Though the focus is on the resort area, the search for Dorner, 33, stretches across California, Nevada, Arizona and northern Mexico. LAPD officers are especially on edge because Dorner, who was fired from the force in 2008 after three years on the job, promised in rambling writings to bring "warfare" to police and their families.

"We don't know what he's going to do," said Cindy Bachman, spokeswoman for the San Bernardino County Sheriff's Department, one of many law enforcement agencies whose primary purpose has become finding Dorner. "We know what he's capable of doing. And we need to find him."

Said LAPD Assistant Chief Michel Moore: "This complex and violent investigation has led to this mountain."

The pickup was to be processed at a crime lab Thursday evening and examined by investigators from multiple agencies.

On Thursday, law enforcement officials were inspecting a package CNN's Anderson Cooper received from Dorner. CNN spokeswoman Shimrit Sheetrit said that a parcel containing a note, a DVD and a bullet hole-riddled memento was addressed to Cooper's office.

The memento was a coin bearing the name of former Los Angeles Police Chief Bill Bratton, who appeared with Dorner in a picture taken years ago. On "CBS This Morning" Friday, Bratton described Dorner as "an incredibly dangerous individual" and reacted to the damaged coin.

"When you see that that coin that was given in friendship and respect has three bullet holes, it's certainly very chilling," Bratton said.

Throughout the day, thousands of heavily armed officers patrolled highways throughout Southern California, while some stood guard outside the homes of people police say Dorner vowed to attack in a rant posted online. Electronic billboards, which usually alert motorists about the commute, urged them to call emergency services if they saw him.

"I will bring unconventional and asymmetrical warfare" to Los Angeles Police Department officers, on or off duty, said the manifesto. It also asserted: "Unfortunately, I will not be alive to see my name cleared. That's what this is about, my name. A man is nothing without his name."

Dorner, 33, had several weapons including an assault rifle, said police Chief Charlie Beck, who urged him to surrender at a news conference held amid heightened security in an underground room at police headquarters.

"Of course he knows what he's doing; we trained him. He was also a member of the Armed Forces," he said. "It is extremely worrisome and scary."

The nearly 10,000-member LAPD dispatched officers to protect more than 40 potential targets, including police officers and their families. The department also pulled officers from motorcycle duty, fearing they would make for easy targets.

"I never had the opportunity to have a family of my own, I'm terminating yours," the manifesto said.

At one point, officers guarding one location mistakenly opened fire on a pickup truck, believing it matched the description of Dorner's dark-colored 2005 Nissan Titan. Two occupants were injured.

The chief said there had been a "night of extreme tragedy in the Los Angeles area" and that the department was taking measures to ensure the safety of officers.

The search for Dorner, who was fired from the LAPD in 2008 for making false statements, began after he was linked to a weekend killing in which one of the victims was the daughter of a former police captain who had represented him during his disciplinary hearing. Thursday was the anniversary of his first day on the job at the department eight years ago.

Monica Quan and her fiance, Keith Lawrence, were found shot in their car at a parking structure at their condominium on Sunday in Irvine. Quan, 28, was an assistant women's basketball coach at Cal State Fullerton. Lawrence, 27, was a public safety officer at the University of Southern California.

Police said Dorner implicated himself in the couple's killings in the manifesto posted on Facebook. They believe he was the one who wrote it because there were details in it only he would know.

In the post, Dorner wrote that he knew he would be vilified by the LAPD and the news media, but that "unfortunately, this is a necessary evil that I do not enjoy but must partake and complete for substantial change to occur within the LAPD and reclaim my name."

CBS News senior correspondent John Miller, a former top LAPD official, reports that Dorner cut off all his cell phones and other connections Jan. 31, indicating that he had spent time planning his alleged rampage.

According to documents from a court of appeals hearing, Dorner was fired from the LAPD after he made a complaint against his field training officer, Sgt. Teresa Evans. Dorner said that in the course of an arrest, Evans kicked suspect Christopher Gettler, a schizophrenic with severe dementia.

Richard Gettler, the schizophrenic man's father, gave testimony that supported Dorner's claim. After his son was returned home on July 28, 2007, Richard Gettler asked "if he had been in a fight because his face was puffy" and his son responded that he was kicked twice in the chest by a police officer.

Quan's father, a former LAPD captain who became a lawyer in retirement, represented Dorner in front of the Board of Rights, a tribunal that ruled against Dorner, police said. Randal Quan retired in 2002 and later served as chief of police at Cal Poly Pomona before he started practicing law. Quan did not immediately return a message seeking comment.

Dorner said in his online rant that after his dismissal that he lost everything, including his relationships with his mother, sister and close friends.

"Self-preservation is no longer important to me. I do not fear death as I died long ago," the manifesto said. "I was told by my mother that sometimes bad things happen to good people. I refuse to accept that."

Dorner said he would use all of his training to avoid capture and track his targets.

Dorner also had served in the Naval Reserves, earning a rifle marksman ribbon and pistol expert medal. He was assigned to a naval undersea warfare unit and various aviation training units, according to military records, and took a leave from the LAPD and deployed to Bahrain in 2006 and 2007.

"I will utilize every bit of small arms training, demolition, ordinance and survival training I've been given," the manifesto read. "You have misjudged a sleeping giant."

Earlier Thursday, two LAPD officers en route to provide security to one of Dorner's possible targets, were flagged down by a resident at a gas station in Corona who reporting seeing the suspect. The officers then followed a pickup truck until it stopped. The driver, believed to be Dorner, got out and fired a rifle, police said. A bullet grazed an officer's head.

Later, two officers on routine patrol in neighboring Riverside were ambushed at a stoplight by a motorist who drove up next to them and opened fire with a rifle. One died and the other was seriously wounded but was expected to survive, Riverside police Chief Sergio Diaz said.

Diaz said news organizations should withhold the officers' names because the suspect had made clear that he considers police and their families "fair game."

The hunt for Dorner also led to two errant shootings in the pre-dawn darkness Thursday.

LAPD officers guarding a target named in the manifesto shot and wounded two women in suburban Torrance who were in a pickup truck, authorities said. A lawyer said they had no warning.

Beck said one woman was in stable condition with two gunshot wounds and the other was being released after treatment.

"Tragically we believe this was a case of mistaken identity by the officers," Beck said.

Minutes later, Torrance officers responding to a report of gunshots encountered a dark pickup matching the description of Dorner's, police said. A collision occurred and the officers fired on the pickup. The unidentified driver was not hit and it turned out not to be the suspect vehicle, they said.

In San Diego, where police say Dorner tied up an elderly man and unsuccessfully tried to steal his boat Wednesday night, Naval Base Point Loma was locked down Thursday after a Navy worker reported seeing someone who resembled Dorner.

Navy Cmdr. Brad Fagan said officials believe Dorner had checked into a base hotel on Tuesday and left the next day without checking out. Numerous agencies guarded the base on Thursday. Fagan said Dorner was honorably discharged and that his last day in the Navy was last Friday.

Nevada authorities also joined the search, because Dorner owns a house 9 miles (14.5 kilometers) from the Las Vegas Strip, according to authorities and property records.