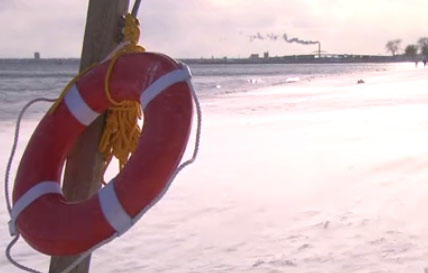 A white Christmas for much of the Northeast and Midwest has given way to bitter cold until the New Year. Meteorologists are warning of sub-zero arctic air and dangerously cold wind chills.

Frigid conditions are expected in many parts of the country this week.

Wind chill advisories or warnings are in effect for all of North Dakota and Wisconsin, as well as swaths of South Dakota, Minnesota, Iowa, Michigan and Indiana. Parts of Maine, Vermont, New Hampshire and New York are also under advisories.

Meteorologists say frostbite is possible with as little as 30 minutes of exposure.

Brutally cold temperatures are expected in the Boston area, and EMS workers say they are prepared: Every ambulance will be loaded with heat packs to combat cold-related ailments, CBS Boston reports.

Meanwhile, further down the East Coast, crews were treating bridges and overpasses with brine in the Raleigh area as a precaution in case parts of the Carolinas have winter precipitation this week. The North Carolina Department of Transportation was sending 12 trucks out to pre-treat elevated roadway structures in Wake County on Tuesday and could expand its efforts Wednesday if snow stays in the forecast.

To the west, forecasters say frigid air could make conditions right for a wintry mix Thursday in a swath across western North Carolina and the South Carolina Upstate.

Most businesses were shuttered on Christmas Day in New England. One of the few open was The Tobacconist cigar shop in Tewksbury, Massachusetts, where area-resident Dwayne Doherty said he welcomed the fresh blanket of snow.

"I'm actually happy," he said, chuckling as he made his way to his pick-up. "We haven't had snow on Christmas at all in the last few years. It's actually perfect."

A blizzard warning was issued Monday for portions of Maine and New Hampshire, with forecasters saying snow of up to 10 inches and wind gusts up to 50 mph could make travel "dangerous to impossible."

A JetBlue plane went off the taxiway at Boston's Logan Airport on Christmas night, the airline confirmed to CBS News. There were no injuries, JetBlue said.

Traffic was backed up on Interstate 90 near Erie, Pennsylvania on Christmas Day due to snow squalls and blowing winds that led to slick roads and poor visibility.

Amid high winds and in anticipation of below-freezing temperatures, Baltimore officials declared a hypothermia alert. News outlets report Baltimore City Health Commissioner Dr. Leana Wen said in a news release that the Cold Blue would be in effect through Thursday morning, in response to temperatures forecast to be fall into the 20s, with wind chill bringing temperatures down to the teens.

States from Montana and the Dakotas to Wisconsin expected wind chill temperatures of 40 below zero in some spots, the National Weather Service said. The upper half of Iowa and northern Illinois also braced for subzero temperatures.

Minnesota experienced its most frigid Christmas Day since 1996, with wind chills as cold as 35 degrees below zero, forecasters said. The National Weather Service warned that those whose skin was exposed in such conditions could get frostbite in as little as 15 minutes.

Snow amounts in the Midwest weren't large for this time of year. A storm system that swept from Nebraska through Iowa dropped around 2 inches of snow on Chicago, the weather service said. That was just enough to provide a picturesque backdrop for those gathering for Christmas dinners in the Chicago area. But it wasn't enough to cause havoc either on roadway or airport runaways.

Chicago's O'Hare International Airport was reporting just six cancellations and average delays of only 15 minutes around noon Monday. There were no cancellations at the city's other major airport, Midway, and delays were less than 15 minutes on average.

The nation's third largest city had comparatively little snow for the season until the weekend: just over 2 inches in all, the National Weather Service said.

The storm was responsible for some power outages. Eversource reported more than 20,000 customers in eastern Massachusetts without electricity, the bulk of them on Cape Cod, which felt the brunt of strong winds.

Most of Indiana had been under winter weather advisory with officials urging motorists to stay put unless they absolutely had to travel.

Mountain areas in parts of Colorado, Montana and Wyoming received more than 1 foot of snow, which started Saturday. It was good news for holiday skiers and resorts that have struggled with a slow start this season.

But it meant a heightened warning of avalanches in higher elevations outside of ski areas.