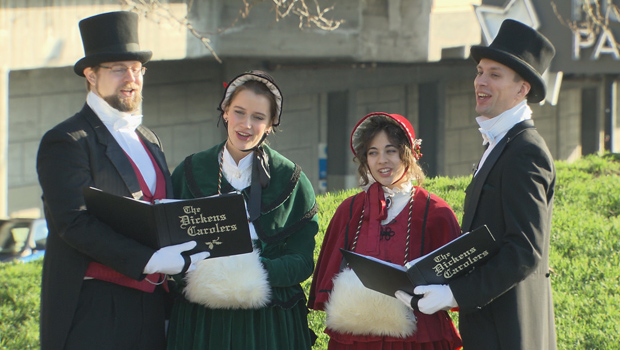 It's never too early to develop a love for the Christmas carol. Lee Cowan reports our Cover Story:

Greg was born on Christmas Eve.

"You remember loves lost, loves had, loves gained," he said. "It's a time of happiness and a time of recollection."

When he was younger he would spend his merry birthdays walking door-to-door singing Christmas carols for his neighbors.

Did he get a good response? "We got a great response, but people were confused," he laughed. "They're like, 'Why are you caroling? Are you asking for money?' 'No, we're just singing!'"

And he never grew out of it.

Greg is now a professional Christmas caroler. He and his wife Jen operate three performance groups in New York City. In fact, the Holiday Singers just cut their first studio album, "Shine," featuring such standards as "Let It Snow," "Sleigh Ride," "Silent Night," and "Have a Very Merry Christmas."

It may look all "holly and jolly," but the life of a wandering wassailer is rarely easy. They often get the cold shoulder -- and not just from Jack Frost.

To some passers-by, Christmas carols are like visiting relatives: They're happy to see them at first, but soon they wear on your nerves.

Greg, however, is convinced his unique tidings of comfort and joy can turn even the Grinch's ear.

"Sometimes we want to take people out of that moment, take them to back to their childhood," he told Cowan. "Take them back somewhere inside of themselves and connect with them that way. That's what we go for."

The season is short, and rehearsals are long -- and they all hold full-time jobs to boot.

With nearly 100 complex arrangements the carolers have to learn and memorize, they begin rehearsals in July.

"I mean, it's stressful," said Jen Kefalas. "It's not, you know, working-in-a-mine stressful, but it is stressful!"

Caroling originally had nothing to do with Christmas. In fact during, the Middle Ages, people would sing door-to-door to celebrate other big feast days -- May Day, or even Halloween.

By the Victorian era, however, the tradition of carolers being given Christmas treats in exchange for singing to their wealthy neighbors was firmly in place -- hence the famous lyric: "Bring us some figgy pudding."

These days, Kathy Schelleng doesn't expect pudding -- just smiles. Each year she and a few friends trudge through their neighborhood in Plymouth, Mass., offering their fa-la-lahs to anyone who answers the door.

"They're almost always surprised to see somebody at their door," she said. "It gets us in the mood to celebrate."

Carols are sung the world over, although not always in the same way. In Greece children go door-to-door banging triangles.

In Australia, one version of the carol "12 Days of Christmas" doesn't begin with a partridge in a pear tree; it begins with a "Kookaburra in a Gum Tree."

For many Christians, by the way, "The 12th day of Christmas" lands on January 6th -- also called Three Kings Day -- and that, too, is celebrated, especially in Latin America, where it's accompanied with a holiday cake.

But it's the Charles Dickens notion of caroling that most us think about -- which explains why we often see carolers donning their gay apparel from the Victorian Era.

"I hate to say it, but I like to think we're very decorative," laughed Nathan Rodda, co-owner of the Dickens Carolers in Seattle.

He has nearly a dozen quartets wandering the streets, all Victorian to the core.

Even in Seattle's bustling Pike Place Market, they can bring a little heavenly peace. "We measure our success by how often we make people cry," said Rodda. "And it happens all the time, in the most public of places."

It happened to Carol Boectcher during "Oh Holy Night." "I was just completely in the moment and transfixed by them and by the music and the scene, and it was very memorable," she said.

"There've also been many touching moments when you're in a hospital and you're singing for someone in a coma, that you actually see a response from," said Rodda.

Cowan found Charlene Richardson stuck in a nursing facility this Christmas, struggling with her recent news: a brain tumor.

When asked if there were a special song she'd like to hear, she replied, "O Little Town of Bethlehem."

As the Dickens Carolers filled request after request, Charlene smiled as if she had never heard the word "cancer" -- as least for a little while.

Cowan asked, "Not so much fun spending Christmas in here, is it?"

"No, not so much," said Richardson. But hearing the carolers, she told Cowan, "brightens my spirits. It was wonderful."

None of it seems to get old for any of the caroling groups Cowan talked with -- perhaps Nathan summed it up best: "I've sung all of these hundreds of times. What makes it fresh is not how often I sing it; it's who I'm singing it for. They are the ones that make it new."

On this night his quartet was sent to one home as a surprise from a loving husband to his lovely wife. What other time of year would anyone answer the door at night to a group of total strangers -- let alone invite them in to sing?

"It's beginning to look at lot like Christmas,
Everywhere you go ..."

Perhaps Christmas carols touch us so because they're like comfort food. They remind us that not everything changes. They reassure us that traditions matter.

And just like "Frosty the Snowman," they'll be back again next year.