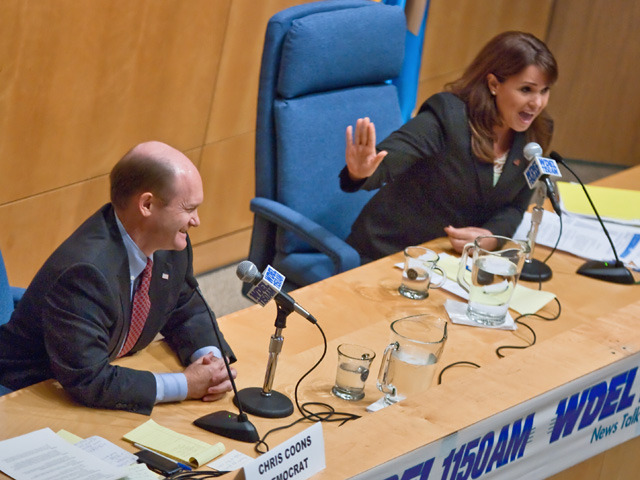 Delaware Senate candidates Republican Christine O'Donnell and Democrat Chris Coons faced off in a bitter - and at times even rowdy - debate on Tuesday morning. Their face-off included interruptions, personal jabs and even several appeals from the candidates to keep the conversation under control.

During the hour-and-a-half debate, hosted by Delaware's Widener Law School and aired on WDEL radio, both candidates were asked to address a range of issues. Among them were the teaching of religious theories in the classroom, their positions on Bush-era tax cuts and the war in Afghanistan.

The conversation quickly grew ugly and contentious, with moderators pleading for order and Coons asking the panel to "move the conversation forward."

"Alright, let's move on; we're getting sidetracked, I feel," moderator Peter MacArthur said at one point in the debate, after O'Donnell urged voters to go to her website to "look at the facts, instead of what the News Journal reports." (O'Donnell also at one point accused local journalists of being biased toward Coons.)

During a particularly heated debate regarding Coons' inherited family wealth and both candidates' credibility as experienced leaders, the Democrat practically begged for forward movement of the discussion. As the audience clapped to his request, O'Donnell pointedly interjected: "Let me just point something out there: When the heat's getting on my opponent, he's calling out for help!"

Discussions about foreign policy were no different. When O'Donnell suggested that "Afghanistan became a vacuum for terrorism and a staging ground for 9/11" because America was "working in Afghanistan to defeat Soviets in the 80s and we left" too early, Coons questioned O'Donnell's knowledge on the issue.

"You have just laid out a position on Afghanistan that is reckless and irresponsible," Coons said. "You thought we were fighting the Soviets in the 90s last time we faced each other!"

"I would take you far more seriously if I had ever seen you at a deployment ceremony for the Delaware National Guard," Coons said.

"Unlike you, I don't turn these things into photo-ops," O'Donnell said. "I do not do it for the glory of the campaign trail."

At times, both candidates talked over each other continuously at such great length that they were interrupted by members of the panel.

"Um, excuse me!" O'Donnell cried to Coons during one point. "I don't interrupt you! Will you please let me finish?!"

The moderator then interjected, noting that "clearly you're both interrupting each other."

Perhaps the most notable moment in the debate came when O'Donnell challenged the notion of separation of church of state in the Constitution.

"You're telling me that the separation of church and state is found in the First Amendment?" she asked Coons.

The candidate's campaign manager later said that O'Donnell was simply making the point that "the phrase appears nowhere in the Constitution."