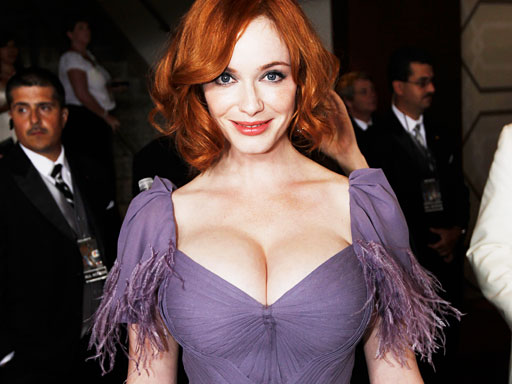 (CBS) With all the attention Emmy nominee Christina Hendricks has been getting for being gorgeous, you might have thought designers were fighting to get her to wear one of their dresses to the Emmys.

The curvaceous "Mad Men" star, voted Sexiest Woman Alive by Esquire, last week told the UK's Daily Record that not one "designer in town will loan me a dress."

She went on to say that "they only lend out a size 0 or 2. So I'm still struggling for someone to give me a darn dress."

"Hendricks is medium-boned with a large chest," says Marisa Sherry, a New York nutritionist in private practice who specializes in eating disorders."For her to fit into a size 2 would be nearly impossible. The average American woman is a size 12, and I think it's quite unfortunate that the fashion industry makes women feel like size 0 and size 2 are the only acceptable sizes."

Hendricks, who is 5'8" and wears a size 14, ended up showing off her full-figured measurements in a gown designed by Zac Posen.

AsCBS Newsreported last month, the 35-year-old says has been fighting negativity about her weight all through her career.

"You don't put a big girl in a big dress," fashion critic Cathy Horyn wrote in the New York Times about the dress Hendricks wore to the Golden Globes.

She used to be 15 pounds heavier - and that, she told Health Magazine, is when she felt the most beautiful. She was modeling in Italy.

Although she "breaks every healthy rule" by eating salty and creamy foods, she tells the magazine that she's started working out for the first time.

There are certainly plenty of fans who hope she doesn't over do it.