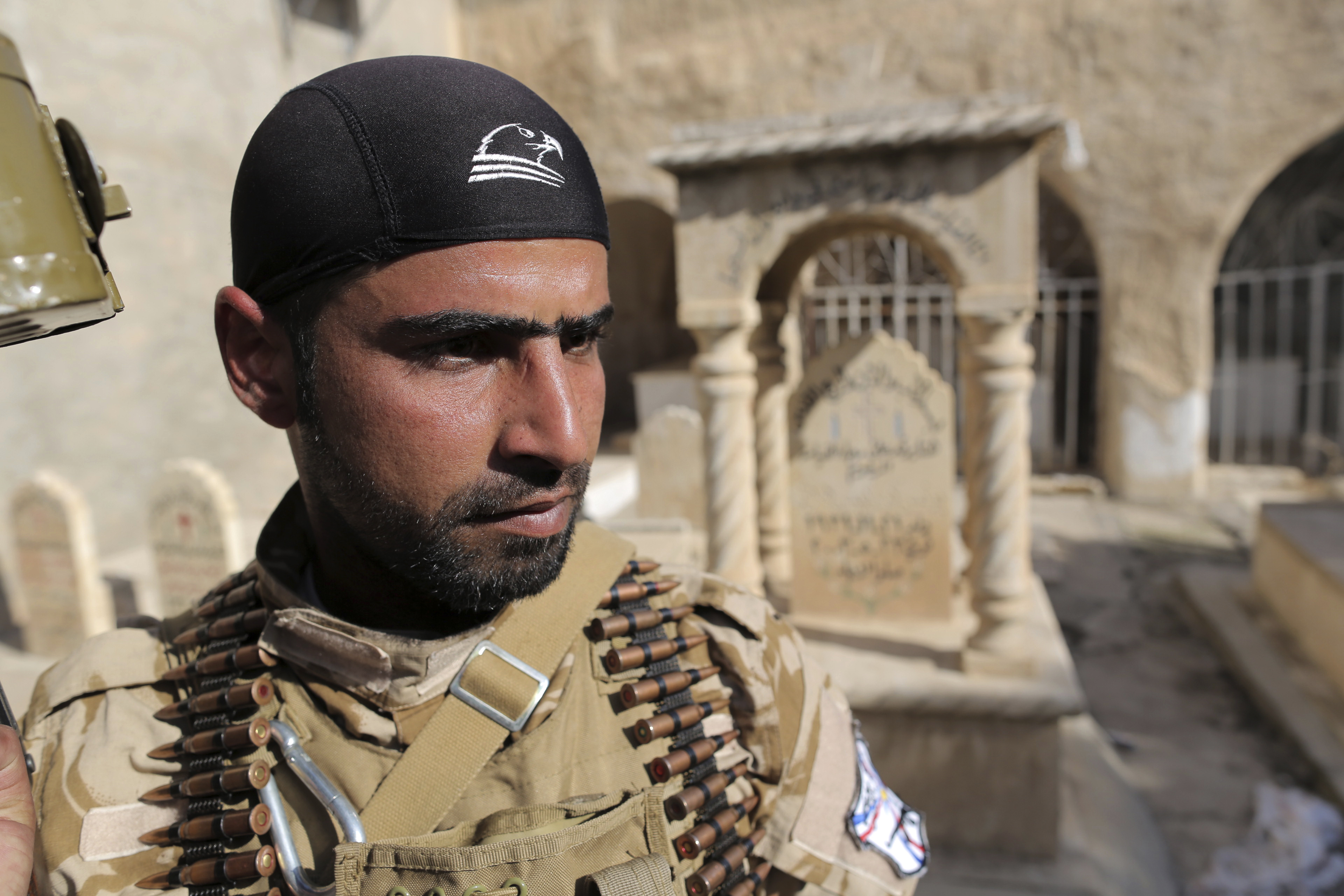 BAKUFA, Iraq -- The flag of an Iraqi Christian minority party is hoisted high over the village of Bakufa in northern Iraq, less than a month after militants from the Islamic State of Iraq and Syria (ISIS) were pushed out and the extremists' black banner was taken down.

The predominantly Christian Assyrian hamlet of 95 houses that once had about 500 people, located some 243 miles north of Baghdad, was overrun by the Islamic State group during its shocking blitz this summer, along with 22 other villages nearby.

In a counter-offensive, the Iraqi Kurdish peshmerga fighters swept in from the north, battling ISIS house-to-house. The fighting forced the villagers to flee to Kurdish towns and cities elsewhere in northern Iraq.

Once Bakufa was retaken, the Kurdish fighters helped set up the village militia, made up of about 70 volunteers and known as Dwekh Nawsha, or "self-sacrifice" in Assyrian.

The men of Dwekh Nawsha now patrol Bakufa round-the-clock, in the hope that the village stays free long enough so their families can return.

A member of the Dwekh Nawasha stood guard on a building rooftop, next to the flag of the Assyrian Patriotic Party, during a recent visit by The Associated Press.

"We found ourselves helpless," said Caesar Jacob, a deputy of to the Christian militia's commander. The 44-year-old electrician said the militiamen worked "side-by-side" with the peshmerga fighters but then gradually took over responsibility for their village.

"We must depend on ourselves to defend our land for now and the future," Jacob told the AP.

The militia commander, Albert Kisso, 47, said Christian territories in what is Iraq's Nineveh province needed their own protection and the forming of the militia was the logical outcome.

Bakufa is also the site of the 200-year old St. Gorgiz Monastery, which Kisso describes as a tribute to the "elegance of the Mesopotamian civilization" of their ancestors.

"It is the priority of Dwekh Nawsha to protect the sons of this region, as well as the region itself - including its monasteries, churches, artifacts," said Kisso, a longtime member of the Assyrian Patriotic Party.

In their onslaught, ISIS also targeted indigenous religious minorities across the country's north, including Christians and followers of the ancient Yazidi faith, forcing tens of thousands from their homes. The area's 120,000 Christians are mostly still in exile.

The Kurdish peshmerga fighters are proud of what they did for Bakufa.

"We came here ... to protect our Christian brothers and their homes," said Abdul Rahman Kawriny, the local peshmerga brigade commander. "There is constant cooperation and assistance. We are always together."

The Dwekh Nawsha militiamen spend the days patrolling the narrow village streets in bullet-proof vests, their insignia prominently displayed on their fatigues.

Relying on donations from Christian charities abroad and wealthier members of the Iraqi Assyrian community, the Christian fighters must supply their own weapons.

Those who do not own a weapon cannot join and many said that Dwekh Nawsha would have 250 men if only they had the needed firepower.