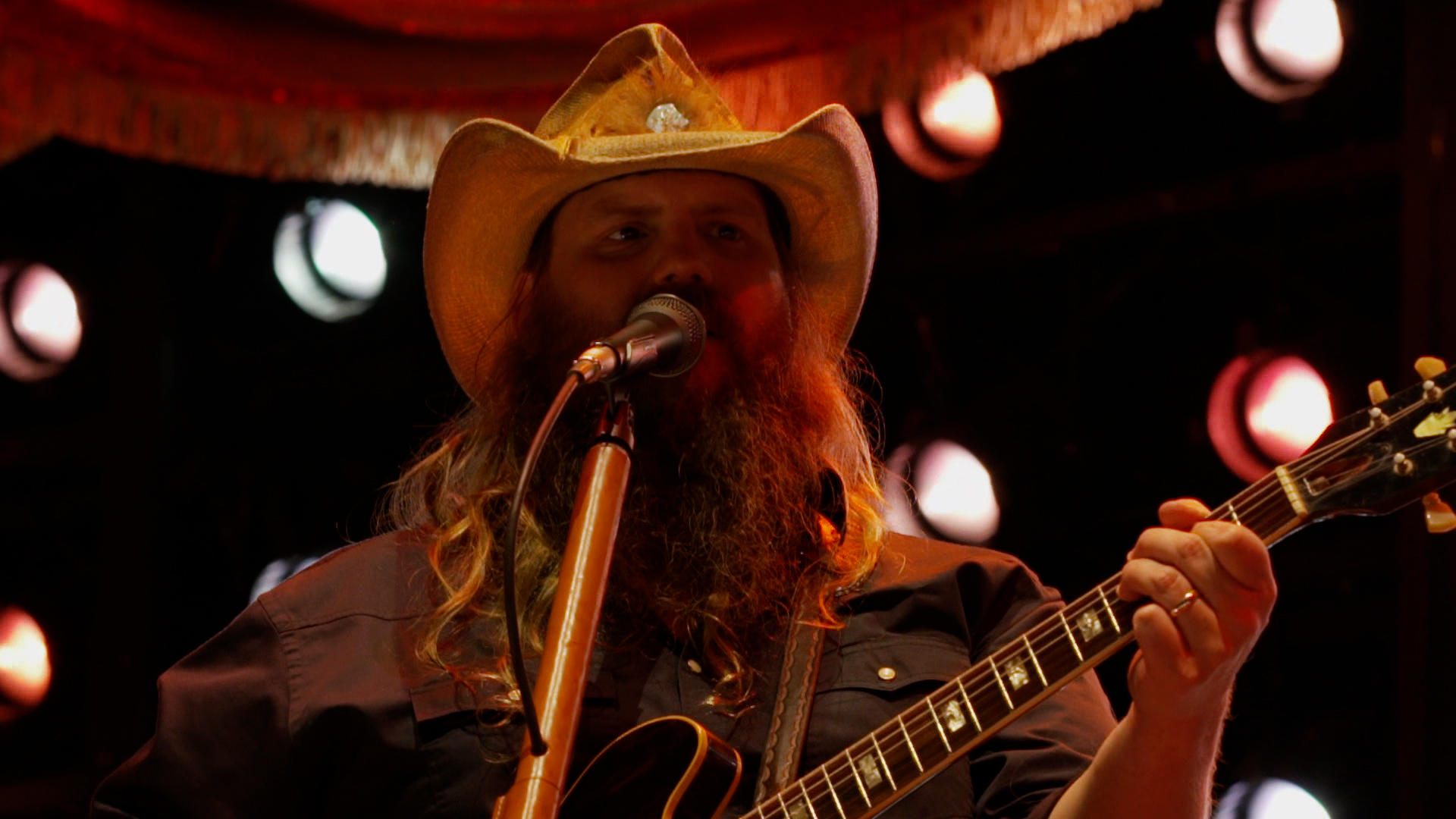 His contemporaries will tell you he's among the best country music has these days. Kentucky-bred Chris Stapleton is a triple threat: a powerfully gifted singer, prolific songwriter and skilled guitar player. Now 43 years old, his talents have connected with music fans across generations and genres. He's collaborated with artists like Adele, Pink and Carlos Santana, won five Grammy awards and is up for another three this year. But Chris Stapleton wasn't looking for accolades or stardom when he came to Nashville. He was a storyteller… and he invited us backstage to hear his.

Before every concert, Chris Stapleton, and his all-star band that includes his wife, Morgane, start their night with a pre-show jam.

There's no flash or gimmicks, nothing pre-recorded. It's live music - in its purest form.

Sharyn Alfonsi: You've sung about whiskey, women, weed, love, and heartbreak. Does it get any more country than that?

On stage, he can silence an arena with a slow-burning ballad or manipulate his guitar to sound like trouble walking through the door. But off stage, we found Chris Stapleton to be soft-spoken, almost shy.

Chris Stapleton: This guitar I got not that long ago.

He showed us around his band cave in Nashville, a rehearsal space filled with artifacts and awards. Those are Grammys and those are spray-painted waffle irons.

Chris Stapleton: They're based on airplay in the Waffle House jukebox so as far I know we've won the most.

The walls of the warehouse are lined with the instruments and gear he collects obsessively.

Sharyn Alfonsi: Do you have a favorite guitar?

This is only a fraction of it. He told us he takes about 20 of his guitars on tour.

Chris Stapleton: This is number one. If I had to have one guitar, and you know it was an electric guitar, this would be the one I'd take with me and the rest of them do other things and I love them very dearly but this one this one is the one that I would take.

Sharyn Alfonsi: Did you ever take lessons?

Chris Stapleton: I took one lesson and then the guy that I took a lesson from quit teaching lessons. And so, that was kinda the end.

Musicians along the way taught him the rest.

Sharyn Alfonsi: That's not what they say. People say you're a great guitar player.

Chris Stapleton: Well they do say that. Other people say that. But I mean I think I have a good sense of doing what I do. I'm probably more of a stylist than I am-- somebody who can do anything.   I'm good at being me on guitar.

Chris Stapleton's sense of self was sharpened in the mountains of eastern kentucky. His father was an engineer, who worked in the coal mines and kept country music CD's in the car. Chris was an athlete, trying out a "starter mustache" back in high school. He was also listening to rap artists like Dr. Dre and Snoop Dogg.

Sharyn Alfonsi: It's hard to think about you, rollin' around listening to Snoop Dogg.

Chris Stapleton: Yeah, it was-- you know, it was some of the realist it was so real that it translated even to some kid in eastern Kentucky who had no notion of the things that he was talking about, you know.

Sharyn Alfonsi: That's interesting. You used the word "real". Like, it felt authentic to you even though that was not your world--

Chris Stapleton: Well, I think it was. It was dangerous too and real and dangerous are very appealing to you know 15 -16-year-old kids.

Stapleton graduated valedictorian from his high school and landed at Vanderbilt University, transferred to Kentucky and then, dropped out. Eventually, discovering his dream job: writing music.

Sharyn Alfonsi: You were gonna be an engineer?

Chris Stapleton: I was at one point, yeah. I did go to engineering school for a minute.

Sharyn Alfonsi: What did-- what'd you think you were gonna do?

Chris Stapleton: I was-- my major was biomedical engineering.

Sharyn Alfonsi: So pretty much the same thing you're doing now. (LAUGH)

Chris Stapleton: Yeah, pretty much the same thing doing now.you know, I was like, well, my dad's an engineer. I'll go be an engineer, you know? And that was-- it wasn't for me.

Sharyn Alfonsi: Did you know you wanted to be a songwriter?

Chris Stapleton: I didn't even know it was a thing.

Sharyn Alfonsi: What do you mean?

Chris Stapleton: I just assumed when people sang songs on records, that they made it up. You know, and then--

Sharyn Alfonsi: That it was coming from them.

Chris Stapleton: Yeah. And that-- and then, you know, I met somebody who was a songwriter. And then it was just like, that's a job? They're gonna pay you to sit in a room and make things up on guitar? That's m-- that's the-- I need that job. That's the job I want.

In 2001, armed with the songs he'd been writing since high school, Stapleton went back to Nashville. Four days after arriving in town, he got a job with a music publishing company writing for other artists. He'd go on to write for some of country's biggest stars like George Strait, Miranda Lambert, Luke Bryan, and Blake Shelton.

Sharyn Alfonsi: How many songs do you think you've written?

Chris Stapleton: I don't know. Probably in excess of a thousand.

Sharyn Alfonsi: A thousand. How many do you think are good?

Sharyn Alfonsi: What's a win for-- writing a song?  When do you know, okay, this is-- I did this well.

Chris Stapleton: I don't think I ever know that. The win is finishing the song. And there are a lot of songwriters who will claim that they know. "Yeah, I knew this-- when we wrote this one that it was a six-week number one. And-- and I was gonna get a big giant check in the mail." I really just think those guys are full of s***. I don't think anybody knows that. Like, you can't--  possibly know how everybody's gonna feel about a song that you write. That's impossible to know. I don't trust computer research or phone surveys or anything like that. You have to take it to the people. I trust people. And I trust people who have taste.

People like his wife, Morgane. She was the one with the record deal when they met. Her deal didn't last but theirs did. She is the mother of their five children, his muse and harmony singer.

Morgane Stapleton: It was very much a-- "Whoa." He's so powerful. Just the sheer volume of his voice is just-- it-- he doesn't need a microphone in a room that's quiet. It's powerful.

But Morgane says Chris never craved the spotlight. He was happy writing songs for others and enjoying his side hustle playing in bands. Still, his powerful voice was gaining legend around Nashville's music row.

At age 33, already a 10-year veteran of the country music scene, universal music group offered him his own record deal. Morgane had to convince him to say yes.

Sharyn Alfonsi: You didn't jump on it right off the bat because of what?

Chris Stapleton: Oh, I'm suspicious of most things. It's just part of my personality.

Sharyn Alfonsi: It is?

Sharyn Alfonsi: What were you suspicious of, they were gonna tell you t--

Sharyn Alfonsi: Like, shave your beard and get a spray tan?

He went on to release his first single in 2013. But it went nowhere.

Chris Stapleton: The same month that that single died my dad also passed away in that same month. It was-- it was a bad month and I didn't, didn't feel great about it and I was in a real bad spot.

Hoping to help, Morgane bought this vintage jeep Chris had been eyeing online, even though it was 1,600 miles away in Phoenix, Arizona.

They picked it up and on the trip back to Nashville, he wrote "Traveller," the title track to his first solo album. The collection of 14 songs would be a turning point in his career.

Chris Stapleton: We did that whole record in a week.

Sharyn Alfonsi: You did Traveller in one week?

Sharyn Alfonsi:  You gotta be kidding me.

Chris Stapleton: We were on a roll. And that's the only way I can describe it.

Chris Stapleton: Well, I wanted to make a record that I thought my dad would have liked.

Music critics loved it but early on the album was only a modest success. That changed overnight, when, at the 2015 CMA Awards pop star Justin Timberlake, a new friend and fan, joined him to perform.

Chris Stapleton: It was electric. kinda lightning in a bottle kinda moments, that was one of 'em, for sure. Maybe the biggest one for us, you know?

Chris Stapleton: Most people that were watching that show had never heard of me at that point. And then sales of that record went up, you know, a bazillion percent. And it was just nutty after that.

Stapleton won four CMA awards that night and two Grammys a few months later, something he never dreamed of when he came to Nashville to write music.

Chris Stapleton: One time, a long time ago, just for almost a gag, me and a buddy came down and I said, "Well, I'm just gonna play on the-- the corner and see what I can do."

Sharyn Alfonsi: You did?

Chris Stapleton: I did. So I played on the corner. And-- and I made, like, I don't know, $40 bucks in an hour. And at that point, that was the most money I'd ever made in an hour, and I was like maybe I should just come here and play on the street.

More than a decade later, just blocks from that corner this was the crowd that came to hear him.  Chris Stapleton has grown into one of the biggest stars in country music, but he remains one of the most reluctant.

Sharyn Alfonsi: It must be hard for you to hide out right now. Y-- you're a very distinct looking fellow.

Chris Stapleton: I am a very distinct looking fellow. I can hide out. I can walk around a lotta places, if I'm not wearing…

Chris Stapleton: The hat and, you know, all blacked out. But-- and also, I'm kinda scary looking. So it also gives people just enough pause sometimes to go, "I-- I don't know if I should walk up to him right now."

He may look like a Hells Angel, but his songs reveal Chris Stapleton's true character. Under the hat, it's all heart.

Ukraine, Russia and ballet in exile

Comedian Trevor Noah on humor and belonging
Thanks for reading CBS NEWS.
Create your free account or log in
for more features.
View CBS News In
CBS News App Open
Chrome Safari Continue
Be the first to know
Get browser notifications for breaking news, live events, and exclusive reporting.