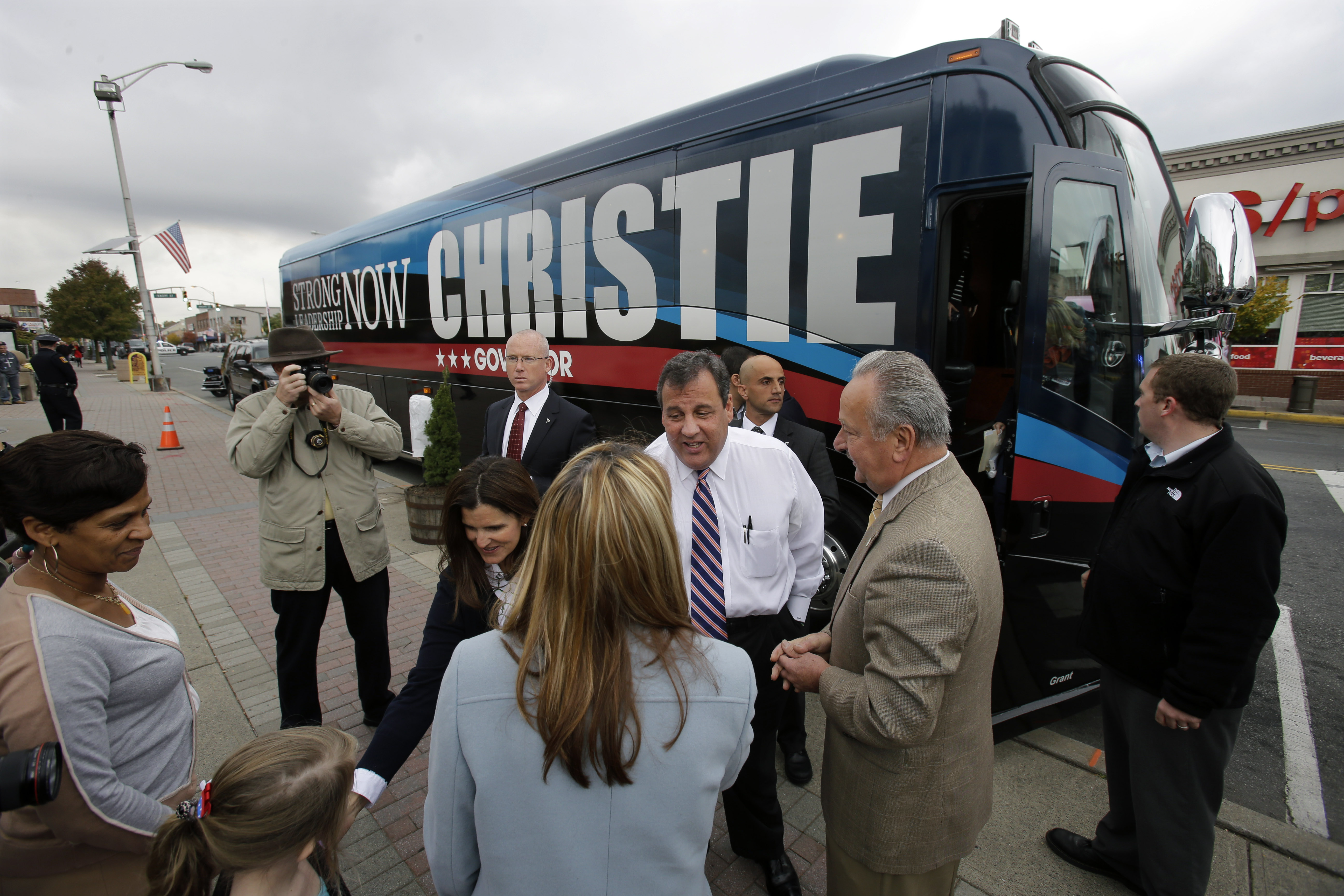 BLOOMFIELD, N.J. -- Chris Christie probably could be taking it a bit easier in this final week before Election Day.

After all, he holds a 25.4-percentage-point lead over Democratic state Sen. Barbara Buono in the latest RealClearPolitics polling average -- a downright comfortable margin by any standard.

On Wednesday, however, the New Jersey governor embarked on a seven-day, 90-stop bus tour that will take him to all 21 of the state's counties by the time the polls close on Tuesday.

He has plenty of reason to keep pushing hard, even if his re-election is not really in doubt: Christie is fighting for every last vote in this Democratic stronghold with the tacit goal of earning a historically massive victory -- one that will give him a compelling talking point in the 2016 race for the Republican presidential nomination.

Though his jam-packed schedule looks grueling on paper, it is not particularly daunting for a candidate who revels in retail politicking and appears to thrive on the energy of enthusiastic constituents, whom he engages with just about every day.

When his black, red and blue campaign bus pulled up to the Nevada Diner here on Wednesday for stop No. 4 of the jaunt, Christie was greeted by a diverse throng of supporters eager to keep in Trenton the man sent there after a tight race against incumbent Democrat Jon Corzine four years ago.

"I didn't vote for you last time, but I kicked myself in the butt for voting for Corzine," one man told Christie as they shook hands.

Though he may be most famous nationally for his bombastic and often confrontational style of speechmaking, Christie's relaxed and affable style of gripping and grinning was on full display as he greeted many of the younger well-wishers who showed up to get an autograph or take a selfie with their governor.

After posing with him for a more traditional photo, one teenage boy asked, "Can I get one with a fist bump?"

"Sure, why not?" Christie replied, clenching his fist and pounding his knuckles against the young man's in a pose that seemed destined for Instagram or Facebook.

Between addressing a soon-to-be college freshman's concerns about funding for tuition grants ("Don't worry, we're there to help") and signing a younger girl's leg cast, the charismatic candidate reflected on how the final stretch of campaigning this time around feels so unlike 2009.

"Just being the incumbent makes it different," he said. "I was saying on the bus on the way in, there were no lights and sirens greeting us everywhere four years ago."

Asked whether he felt any concern about complacency in light of his large lead in the polls, Christie didn't sound particularly worried.

"That's part of my job over the next six days -- making sure they come out," he said of the supporters surrounding him.

Earlier in the day, Christie caught up with swarms of old friends at the Ritz Diner in his childhood hometown of Livingston. But even in less familiar confines, he appeared always to be among old friends.

Outside an event in Fair Lawn, Christie rattled off the first names of almost a dozen people who lined up to greet him with Jersey-style hugs and kisses.

At a senior center there, he instructed the crowd that they were not "relieved from duty" to vote on Tuesday, despite his strong lead.

But Christie seemed to be even more interested in talking up three of the down-ballot candidates whom he had previously endorsed and who were on hand at the event.

As has been the case throughout this campaign, in his stump speech he leaned heavily on bipartisan themes, acknowledging that many of his supporters come from a different place ideologically than he does.

"I told you when I ran four years ago that you wouldn't always agree with me, but every day I would work hard to make you proud that I was your governor," he said. "People feel proud to be from this state again. We don't mumble it under our breath."

He touted his success combating corruption in the state legislature and heralded his administration's avoidance of scandal.

And in yet another demonstration of why he has remained so popular in a state that President Obama carried by 17 points last year, Christie hit on several themes that are more often sounded on the stump by Democrats, including his commitment to taking care of "the most needy in our society."

"It's not necessarily about the party," he said. "It's about the person."