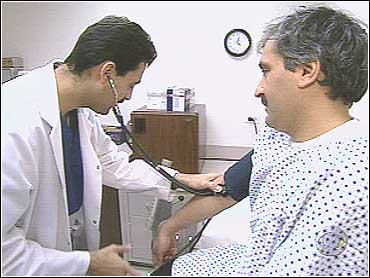 An FDA advisory panel said Thursday that a widely used cholesterol-lowering medicine should stay a prescription drug. On Friday, the rejected another drug company request to make one of these drugs available without prescriptions. In the case of both drugs, the FDA panel said, letting them be sold over the counter, raised concerns over safety and side effects. CBS News Medical Correspondent Elizabeth Kaledin reports on what this means at the counter--and for your heart.

Life would be a lot easier for Nizar Obaidly if he could buy his cholesterol-lowering drug over the counter. But would his life be safer?

That was the main concern for an FDA panel Thursday, as it rejected one company's bid to switch the top-selling, cholesterol-lowering drug Mevacor from prescription to over-the-counter.

Five million Americans already take cholesterol-lowering drugs, but some doctors estimate if they were made available without prescriptions, another 15 million people would benefit.

People with cholesterol levels of 240 or higher are routinely put on prescription drugs. Cholesterol expert Dr. Antonio Gotto believes broader availability of the drugs would mean lower-risk patients who have no symptoms could get them.

"I'm not advocating putting it in the water supply," Gotto says. "But I do think there are millions of people in our country who could benefit and avoid being disabled by an early heart attack or stroke."

NASA is celebrating the 25th anniversary of the Hubble Space Telescope with the release of a dramatic new look at a young star cluster 20,000 light years away

But CBS News Medical Consultant Dr. Bernardine Healy, president of the American Red Cross, says a decision to let the public take powerful drugs without supervision is careless. "We don't know the consequences, year after year, life-long, of taking these fairly powerful drugs...and we don't know what is happening in these patient's bodies because we have no physician monitoring them."

There are rare side effects related to these medications: muscle inflammation and liver damage. But to Gotto, the potential of making a dent in the epidemic of heart disease would be well worth small risks. "I'm convinced that it is safe treatment."

The FDA panel was not. The second drug, Pravacol, was denied over-the-counter status Friday.