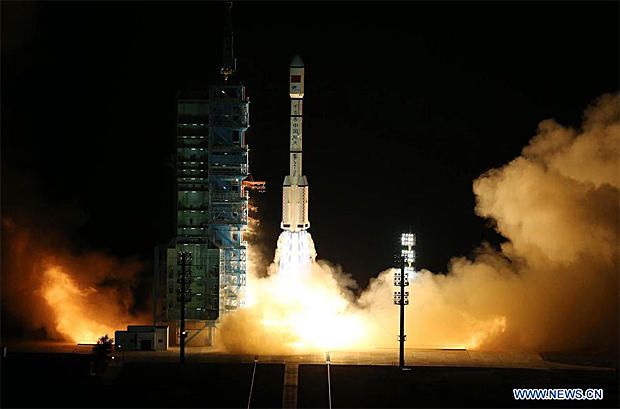 A Chinese Long March rocket boosted an advanced laboratory module into space Thursday that will serve as an orbital base for month-long stays by two-person crews starting in late October, paving the way toward construction of a large Mir-class space station in the early 2020s.

The Chinese astronauts will spend up to 30 days at a time aboard the Tiangong-2 -- “Heavenly Palace” -- module to carry out a broad range of experiments, to test enhanced life support systems, autonomous refueling and other key technologies needed before assembly of an actual space station begins in 2022.

“The launching of Tiangong-2 is a ... solid foundation for the building of China’s space station in the future and is highly significant,” Wu Ping, deputy director of China’s manned space program, told reporters Wednesday.

A small “microsatellite” also will be deployed to fly in formation with Tiangong-2 and take photographs of the spacelab.

“We’re looking forward to a lot of major findings from these experiments,” Wu Ping said through a translator.

The Long March 2F/T2 rocket blasted off from the Jiuquan Satellite Launch Center in China’s Gobi Desert at 10:04 a.m. EDT (GMT-4; 10:04 p.m. local time). The launching was carried live on Chinese television, showing the booster’s fiery climb out of the dense lower atmosphere.

Tiangong-2 was released from the booster’s upper stage about nine minutes and 45 seconds after liftoff, slipping into an orbit with a low point of 124 miles and a high point of about 250 miles. A few moments later, its solar arrays deployed as planned and Chinese mission managers declared the launching “a complete success.”

Tiangong-2 later will be maneuvered into a circular orbit at an altitude of 238 miles, about 15 miles below the International Space Station but 30 miles or so higher than China’s previous spacelab, Tiangong-1.

Tiangong-2 “will be outfitted to host astronauts for up to 30 days whereas in the past it was short visits only,” said Joan Johnson-Freese, a professor at the Naval War College and a noted expert on China’s space program. “Life support systems was one of the areas that China really had no experience in whatsoever, so they’ve been taking it very slow and cautiously.”

If all goes well, China will launch the unpiloted Tianzhou-1 cargo ship next April to autonomously dock with Tiangong-2. Like Russian Progress space freighters, Tianzhou-1 will be capable of automatically transferring propellants, a crucial requirement for space station assembly and maintenance.

“That will further their docking capabilities needed for the larger space station,” Johnson-Freese said. “Tiangong-2 is supposed to be able to stay in orbit for two years or longer, so that’s taking them really close to 2019 or so. I think this will be their last big technology test phase before going to their large space station.”

Tiangong-1, launched in September 2011, served as an initial space station prototype, giving the Chinese experience with autonomous dockings. It was visited by two crews, including China’s first two female astronauts, with stays lasting up to 15 days or so.

While it looks very similar to Tiangong-1, measuring 34 feet long and 11 feet across at its widest, Tiangong-2 is a much more advanced spacecraft, with enhanced life support equipment, refueling systems, more than 40 experiments and accommodations to support two astronauts for a month at a time.

“The astronauts can now have a better dining and sleeping environment in the spacelab, and they have also physical exercises for experiments and recreation facilities,” Wu Ping said in translated remarks. “These changes will make the 30-day life for the astronaut in space more comfortable, convenient and more colorful.”

The Shenzhou spacecraft and the two Tiangong spacelab modules are critical elements of China’s Project 921, which is aimed at perfecting low-Earth orbit space transportation, rendezvous and docking technology, in-orbit maintenance and the eventual construction of a large 65-ton multi-module space station. Johnson-Freese said she expects up to four crews to visit Tiangong-2 during its planned operational lifetime.

Assuming China stays on schedule, its space station will become operational as the much larger International Space Station approaches retirement in 2024.

“The Europeans are already learning Chinese because in 2022 the Chinese space station will be the de facto international space station,” Johnson-Freese said. “I think the rest of the world is gearing up to work with China on their forthcoming space station, and the United States (is) adamant that we don’t work with authoritarian, communist countries.

“Well, except we do,” she said, referring to Russia’s role in the International Space Station program. But given the political climate in Washington, “we’re not going to work with China.”

“We talk about (how) China really wants to work with us,” she said. “Well, there’s a large portion of the Chinese space community that feels like cooperation with the United States would just slow them down. What they see is that Congress is so fickle they could cancel a program midway. I think they think American politics is too dangerous.”