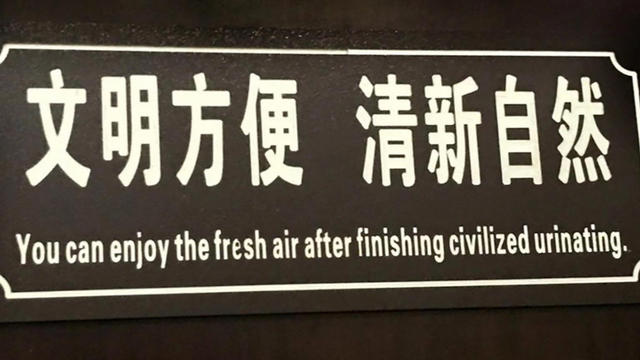 If you've ever traveled to a foreign country, you may have noticed directional signs or menu items with an English translation that isn't quite right. In China, these linguistic misfires, while amusing to some, have become something of a sore spot for the government, which wants to present a more sophisticated image to the rest of the world.

Laura Zhao has been a tour guide in Beijing for 10 years. She said she sees a misspelled or badly translated sign about every 20 minutes.

"I think it's probably because we don't really use English," Zhao said.

There are helpful reminders to "please wait outside a noodle" and always remember to "enjoy the fresh air after you finish civilized urinating."

"To be honest I think it's because lots of people [are] lazy," Zhao said. "When I say this -- lazy -- it's because they directly put it online and translate it and the designer may not really know English at all."

For example, a shoe store sign reads "Old Beijing shoes," which according to Zhao means they sell traditional-style shoes -- not old shoes.

A warning not to step on the growing grass can become "I like your smile but unlike you put your shoes on my face."

Many find the signs pretty funny, but the Chinese government finds it kind of embarrassing, so they have now issued a 10-part guide which has hundreds of official translations, everything from how to write "sunbathing" to "ski resort" to "closing time" and "under construction."

Under the new guidelines, the once widely used "execution in progress" will become "under construction." The highly offensive "deformed men's toilet" sign will now read "accessible toilet."

China first tried to rid itself of embarrassing "chinglish" before the 2008 Olympics. That's when "Racist Park" near the Olympic stadium officially became "Chinese Ethnic Culture Park."

But a harder problem to solve may be all of those menu items -- like "spicy beauty shoes" or "grandma hand bamboo shoots" -- that sound less than appetizing.

"'Spicy' because the flavor is spicy, and it's supposed to make you beautiful and it's a pig's foot," Zhao explained.

After the new guidelines take effect in December. Zhao expects most chinglish signs will be tossed into the "poisonous and evil rubbish."

"Chinese people we are good at following rules, so when the government give you a list of what it should be then everything become[s] easier," she said.

Sadly, it may no longer be easy to find the "exotic romance zone."