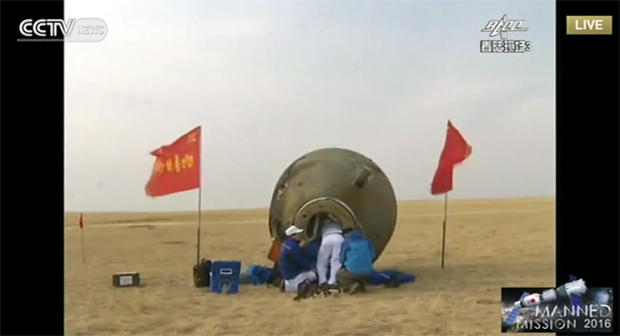 Dropping to Earth under large orange-and-white parachute, the Shenzhou-11 crew capsule touched down just after 1 a.m. EST (GMT-5; 2 p.m. local time), coming to rest on its side. Recovery crews and flight surgeons stationed nearby reached the spacecraft within a few minutes to help the returning “taikonauts” out of the cramped descent module.

Chinese television carried the Shenzhou-11 re-entry and landing live, showing dramatic views of the spacecraft separating into its three major components just before the central crew module, the only one protected by a heat shield, plunged back into the atmosphere.

Recovery crews surrounded the descent module after landing, quickly opening its upper hatch. Chinese television cut away from the landing site before commander Jing Haipeng and flight engineer Chen Dong were extracted, but mission managers reported the crew was healthy.

“Comrades, according to the commanding officer at the landing center, Shenzhou 11 has landed successfully, and two astronauts are all in good shape,” Zhang Youxia, commander of China’s human space program, told dignitaries and flight controllers in translated remarks. “Now I’d like to declare the mission of Tiangong-2 and Shenzhou-11 has achieved complete success.”

Like Russia’s Soyuz spacecraft, which carries cosmonauts and astronauts to and from the International Space Station, the Shenzhou spacecraft can accommodate three crew members. But to pull off a month-long mission aboard Tiangong-2, China opted to launch just two crew members and to carry additional supplies instead.

China’s sixth piloted space mission combined science experiments in a variety of disciplines with engineering tests of the Tiangong-2 module to help pave the way toward construction of a large Mir-class space station around the end of the decade.

China plans to launch an unpiloted cargo ship, Tianzhou-1, next spring to autonomously dock with Tiangong-2. Like Russian Progress spacecraft, Tianzhou-1 will transfer propellants to the habitat to demonstrate a critical technology needed for space station assembly and maintenance.