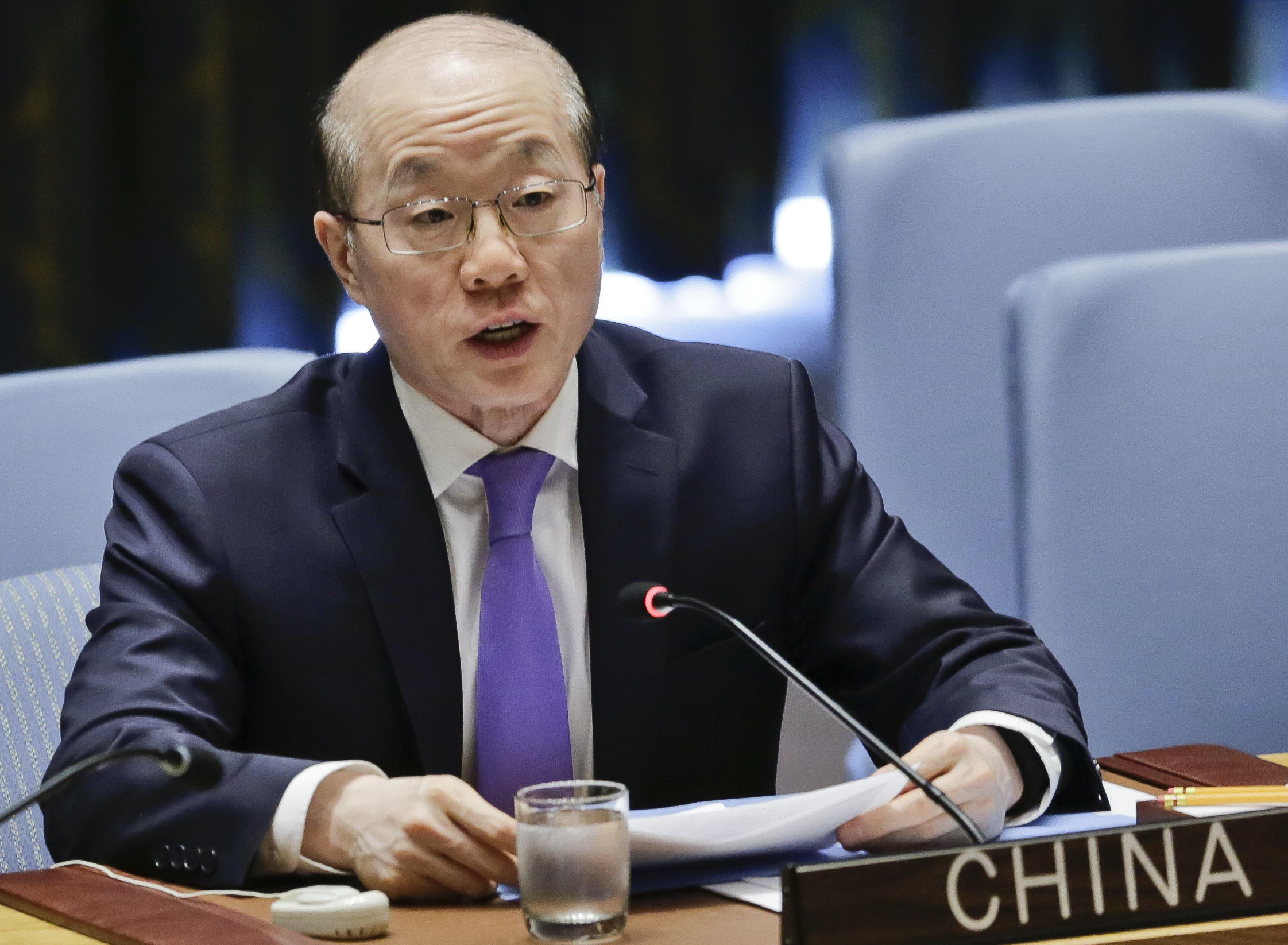 UNITED NATIONS -- China's U.N. ambassador warned Monday that further escalation of already high tensions with North Korea risks getting out of control, "and the consequences would be disastrous."

Liu Jieyi expressed hope that key nations will be "more forthcoming" and support China's three-part package to de-escalate tensions -- revive negotiations and dialogue leading to denuclearization and peace and stability on the Korean Peninsula.

He reiterated at a news conference that an important initial proposal in the package is "suspension for suspension," which would see North Korea halt nuclear and missile testing and the United States and South Korea stop military exercises.

Fears of a conflict on the Korean Peninsula, which has been divided between the American-backed South and communist North since the 1950-53 Korean War, have escalated as the North's young leader, Kim Jong Un, has expanded a nuclear arsenal and developed ballistic missiles that can carry nuclear warheads. His government says these are needed to avert a U.S. invasion.

North Korea's U.N. Ambassador Kim In Ryong said last week that the more than 50-year confrontation between North Korea and the U.S. came closer to the brink of nuclear war than ever before when the U.S. and South Korea held what he called their largest-ever "aggressive" military exercises in April and May.

Kim warned the U.S. and the rest of the world that his country will keep building up its nuclear arsenal regardless of sanctions, pressure or military attack. Already this year, North Korea has disclosed and tested four new missile systems, sending a defiant message that it will continue to pursue a weapons program that has rattled its neighbors and Washington.

China's Liu, who holds the Security Council presidency this month, said the suspension-for-suspension proposal, achieving denuclearization along with "a security mechanism for the Korean Peninsula at the same time," and replacing the armistice that ended the Korean War with a peace agreement, address all the major concerns in the region.

"And we do believe that once we embark on the road of negotiations along the lines of these proposals -- and, of course, we are open-minded about other proposals -- we will be able to calm things down and seek a lasting solution to denuclearization and peace and stability on the Korean Peninsula," he said.

"We have never stopped working on various parties so that dialogue and negotiations can take place to get us on the track of resolving the problems of denuclearization and peace and security on the Korean Peninsula," Liu said in response to a question on the prospect for negotiations.

"So much is at stake and we cannot afford to wait for too long without dialogue taking place to see the situation having the possibility of worsening still," he warned.

While the Chinese ambassador didn't refer to any country when he expressed hope that "the other parties will be more forthcoming" in accepting the package Beijing outlined, his comment appeared to be aimed at the Trump administration which has made clear that it first wants to see signs that North Korea is starting to dismantle its nuclear and missile programs.

President Trump spoke to China's President Xi Jinping Sunday night about the growing threat from North Korea's nuclear and ballistic missile programs and will meet him later this week at the G20 Summit in Hamburg, Germany, the White House said.

U.S. Secretary of State Rex Tillerson told the Security Council in late April that the U.S. does not seek regime change in North Korea, and he signaled American openness to holding direct negotiations with Pyongyang -- once it begins to dismantle it nuclear and missile programs. But Tillerson said all options "must remain on the table," while emphasizing the need for diplomatic and economic pressure on North Korea.

In an April interview with CBS News' "Face the Nation," Tillerson said that both President Trump and President Xi Jinping have had "extensive discussions around the dangerous situation in North Korea."

"President Xi clearly understands, and I think agrees, that the situation has intensified and has reached a certain level of threat that action has to be taken," Tillerson said.

Last week, the U.S. blacklisted a small Chinese bank over its business ties with North Korea.

Liu stressed that the Security Council should impose global sanctions, not individual countries.

"We have always been opposed to unilateral sanctions outside the framework of the United Nations," the Chinese ambassador said. "We do not see that as the right thing to do."