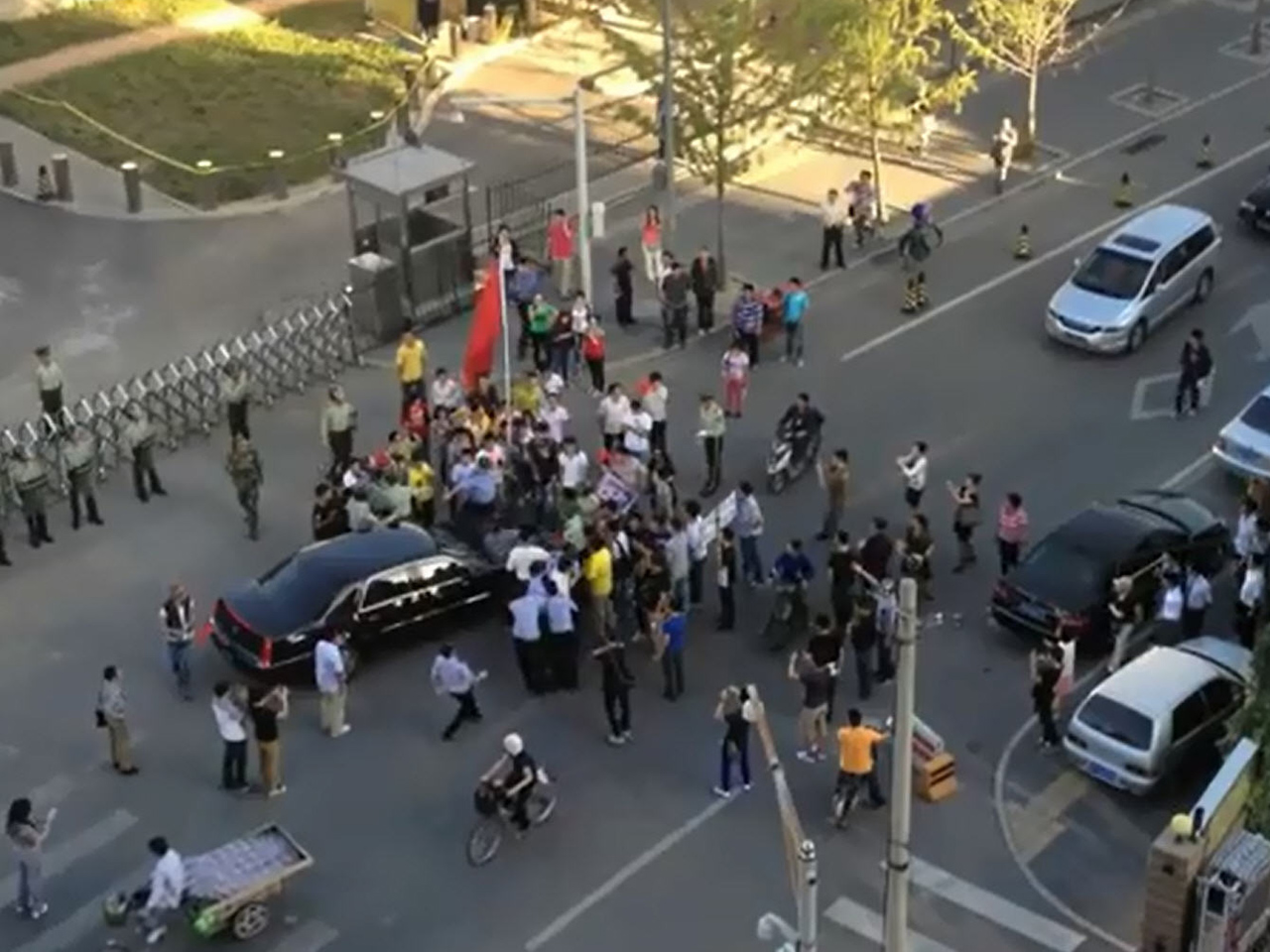 (AP) BEIJING - China said Wednesday it was investigating an incident where about 50 protesters surrounded the car of the U.S. ambassador, tried to block him from entering the embassy compound and ripped the car's flag.

Chinese police cleared roadblocks and some Japanese businesses reopened after days of large, sometimes violent protests in many cities over Japan's recent purchase of islands also claimed by Beijing.

In Beijing, the bitterness spilled over from the Japanese Embassy to the nearby U.S. Embassy. Video posted on YouTube showed a small number of protesters throwing small objects at U.S. Ambassador Gary Locke's car on Tuesday before Chinese security forces moved in to break up the crowd.

Locke told reporters Wednesday that Chinese authorities were "very quick" to move the demonstrators away. "It was all over in a matter of minutes, and I never felt in any danger," he said.

The U.S., a close ally of Japan, has said it is staying out of the dispute over the islands.

The incident came amid heightened vigilance for American diplomats following violent attacks on U.S. embassies in Libya, Yemen and Egypt. The embassy in Beijing said it has asked China's government to do everything possible to protect American facilities and personnel.

State Department spokeswoman Victoria Nuland said the U.S. has registered its concern with China both in Washington and Beijing, and Chinese authorities have expressed regret over the incident.

Nuland said the preliminary U.S. assessment was that the car was "a target of opportunity" for protesters who had gathered outside the nearby Japanese Embassy.

Chinese Foreign Ministry spokesman Hong Lei told a regular news briefing Wednesday that the incident was "an individual case," but that China was investigating it.

The protests over the weekend were triggered by the Japanese government's decision last week to purchase some disputed East China Sea islands from their private Japanese owners. More demonstrations followed Tuesday, the 81st anniversary of Japan's invasion of China, an emotional remembrance that stoked the outrage.

Though the anti-Japan demonstrations have wound down, at least temporarily, there has been no progress in resolving the territorial dispute bedeviling relations between the two Asian economic powerhouses.

The rhetoric on both sides has remained uncompromising.

China's future leader, Xi Jinping, told visiting U.S. Defense Secretary Leon Panetta on Wednesday that Japan's purchase of the islands was a farce, according to the official Xinhua News Agency.

"Japan should rein in its behavior and stop any words and acts that undermine China's sovereignty and territorial integrity," Xinhua quoted Xi as saying.

The islands - called Senkaku in Japan and Diaoyu in China - are tiny rock outcroppings that have been a sore point between China and Japan for decades. Japan has claimed the islands since 1895. The U.S. took jurisdiction after World War II and turned them over to Japan in 1972.

Japan's government sees its purchase of some of the islands as a way to thwart a potentially more inflammatory move by the governor of Tokyo, who had wanted not only to buy the islands but also develop them. But Beijing sees Japan's purchase as an affront to its claims and its past calls for negotiations.

Beijing has sent patrol ships inside Japanese-claimed waters around the islands, and some state media have urged Chinese to show their patriotism by boycotting Japanese goods and canceling travel to Japan.

The islands are important mainly because of their location near key sea lanes in the East China Sea. They are surrounded by rich fishing grounds and as-yet untapped underwater natural resources.

Chinese state media have also reported that boats were headed to the waters around the disputed islands for seasonal fishing.

Hong, the foreign ministry spokesman, said such activities were within China's rights.

"The Diaoyu Islands have belonged to China since ancient times," he said. "It is totally legitimate and reasonable for Chinese fishing vessels to fish in relevant waters."