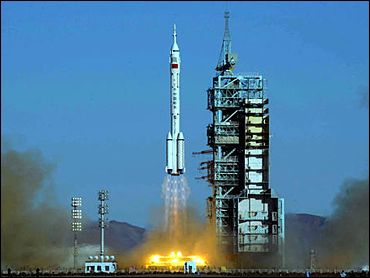 This is China's final frontier of modern marketing — or, at least, its most recent one.

After joining Russia and the United States last month as the only countries to send a human into space, China's space program is eagerly marketing its name and logo to companies looking to share the reflected glory.

Sponsorships are splashed on billboards, product packaging, and in radio and television ads. At least two magazines have appeared focusing exclusively on the Chinese space program. One newspaper, China Space News, sells a 2004 Shenzhou 5 calendar.

There's "space" milk from Mengniu ("Mongol Cow"), which promises to "fortify the Chinese people" and shows a space-suited boy clutching a glass of creamy goodness. Mengniu is headquartered in Inner Mongolia, where Shenzhou 5 and astronaut Yang Liwei landed Oct. 16 after a 21½-hour mission.

There's the "Chinese Inaugural Manned Space Flight Command Watch," produced in a limited run of 2,003, available by mail for 980 yuan ($120) complete with compass and pedometer. Another manufacturer claims to offer the model Yang wore in space — less flashy but costlier.

In the United States, marketing the space programs is a decades-old tradition. Commercial tie-ins with NASA have produced product endorsements from Tang and Velcro to Omega watches and Parker pens.

In China, though, an odd blend of enthusiastic marketing and zealous secrecy reflects the paradox of the "socialist market economy" — Beijing's moniker for its current mix of rigid communist control and uncharted, free-form capitalism.

The space program is a huge source of prestige for the government and seems to be genuinely popular — although public opinion isn't always easy to discern in China, where media are tightly controlled. But the potent mix of pride and popularity makes it a safe bet for hungry companies.

A space-program endorsement is "definitely good for establishing brand name," said a director of promotions at Fiyta, which made the watch the taikonaut Yang wore in space. The man gave only his surname, Liu.

China's space program is run by the military and shrouded in secrecy, so it isn't known how endorsements have been awarded. The program has no known publicity office.

Yet its managers are anxious to exploit potential windfalls and avoid unscrupulous operators in a country where piracy is rampant. A body called the China Aerospace Foundation has demanded approval for commercial uses of the program's name and logo and threatened legal action against violators.

It isn't known how much money endorsements have already earned the program or how the funds have been used. The Nongfu Spring company said it paid $1.2 million for a five-year deal as the program's exclusive drinking water supplier.

"We are honored to connect ourselves to the grand plan," said a company spokeswoman, who gave only her surname, Deng. "The launch deserves the attention of every single person of Chinese nationality."

Deng said the foundation approached Nongfu Spring about an endorsement in September — the month before the orbital flight.

A Fiyta spokesman said his company likely got its berth because a majority stake in its parent company is held by the government's China Aviation Equipment Group. The spokesman, Liu, declined to give financial details of the sponsorship or predict how it might boost sales.

And a spokeswoman for the maker of the "Command Watch" said only that the company owner had "good contacts" with officials.

Yang, a military officer, is a hot property, too. His appearances in Shanghai this week were heavily publicized, and an estimated 130,000 people visited a two-day display of the Shenzhou 5 capsule at a science and technology fair.

Visitors were herded past Yang's space suit and the kettle-shaped capsule. They swarmed the souvenir stand, scooping up pins, keychains and models of Shenzhou 5 and the Long March rocket that sent it into space.

"It's natural that there would be commercial tie-ins," said an organizer of the exhibition, who gave only his surname, Gu. "But," he said, "they're going to have to work hard to protect their trademark."