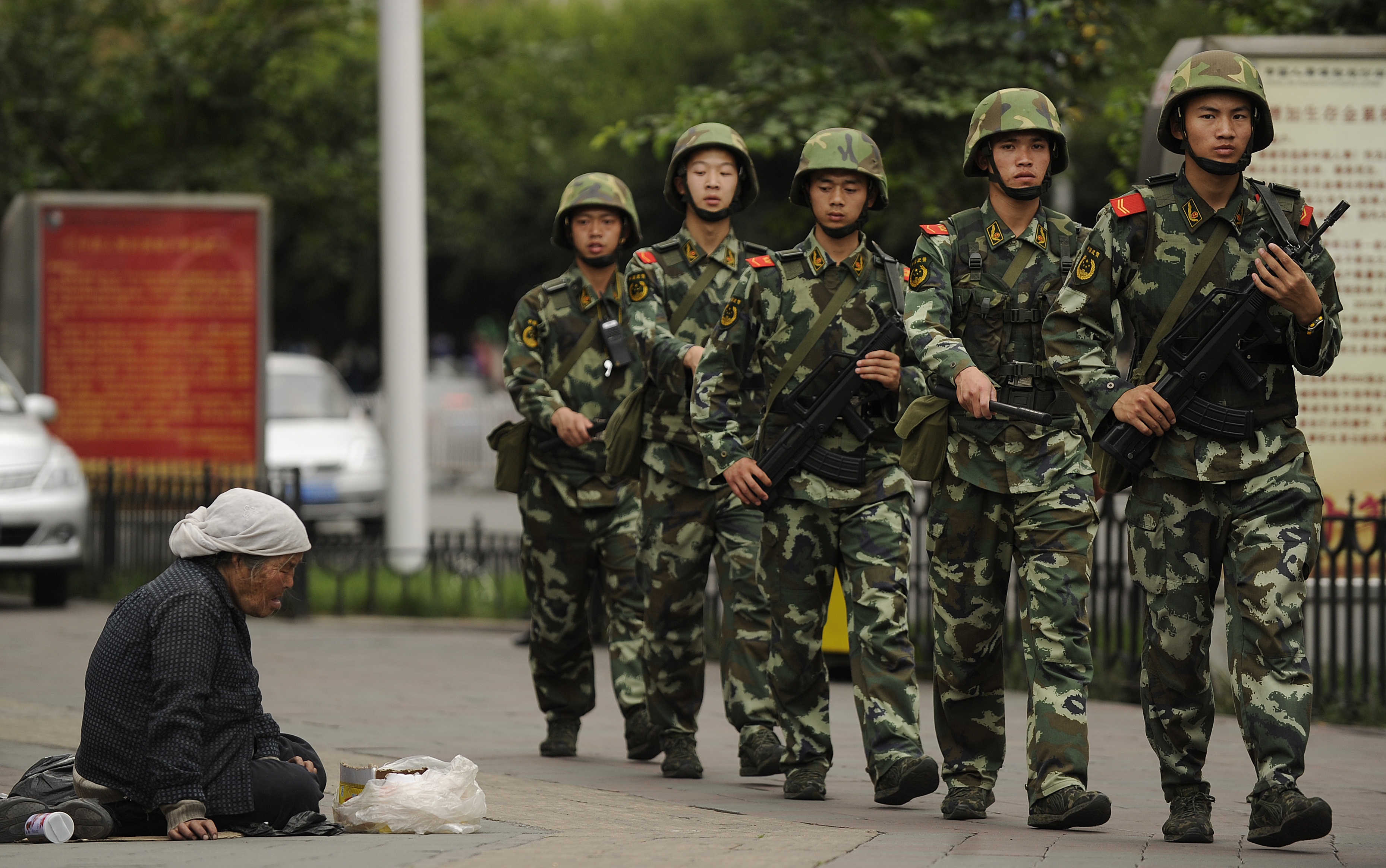 Among the dead in the Tuesday afternoon fighting were 15 police officers and local government officials, the Xinjiang government propaganda office said in a news release. It said six assailants were killed on the spot and another eight were captured alive.

"Initial investigations show this was a gang plotting to carry out terrorist acts and the case is now being further cracked open," the release said.

A leading activist from the region's indigenous Turkic Muslim Uighur ethnic group questioned the official account, saying local sources said that police sparked the incident by shooting a Uighur youth during an illegal search of homes.

The death toll was the highest for a single incident in months in Xinjiang, which sees recurrent outbreaks of violence pitting Uighurs (pronounced WEE'-gurs) against the authorities and majority ethnic Han Chinese migrants. Rioting in July 2009 between Uighurs and Han killed nearly 200 people in Xinjiang's capital, Urumqi, and there have been sporadic attacks since, all of them quickly suppressed with overwhelming force by local paramilitary units.

Tuesday's violence appeared to point to the chaotic nature of much of the Xinjiang violence, as well as problems with how authorities respond. It began when three local officials reported a group of suspicious men armed with knives hiding inside a home in Selibuya township outside the city of Kashgar, the news release said.

The three were then grabbed by the men in the house and local police and officials rushing to the scene were taken by surprise and attacked, it said. Those inside the house killed their three captives and set fire to the building, while the fighting ended only after armed units — who are often stationed in larger towns and barracks and must be specially summoned by commanders — arrived and began firing on those continuing to resist, the report said.

The release said 10 of those killed on the government side were Uighurs, three were Han, and two were from the Mongolian ethnic group. It said two other Uighurs were injured. The ethnicity of the assailants wasn't given and local police and government officials reached by phone said they had no additional information to give.

"We know only what is in the release and have no more to add," said an officer with the Xinjiang regional police, who gave only his surname, Meng, as is common with Chinese officials.

Xinjiang, a sprawling region that borders Central Asia, Afghanistan, and Pakistan, is home to millions of Uighurs, many of whom complain of tight restrictions on religious and cultural life by Beijing and say they have been marginalized by policies favoring Han migrants.

China claims much of the violence is orchestrated by Uighur activists based in the West or in Pakistan and other neighboring countries, but has provided little evidence publicly. The U.S. initially placed one group, the East Turkistan Islamic Movement, on a terrorist watch list following the 9/11 attacks, but later quietly removed it amid doubts that it existed in any organized manner.

Uighur activists say violence largely results from heavy-handed policing by the authorities, including the frequent detention of Uighur men with little or no due process.

Dilxat Raxit, a spokesman for the German-based World Uyghur Congress, said repression has intensified in the area around Kashgar, with an unknown number of Uighurs detained. He denied those involved in Tuesday's clash were part of an organized group and dismissed the government's terrorism claims.

"They always use such labels as a way of justifying their use of armed force," Raxit said in a phone interview.