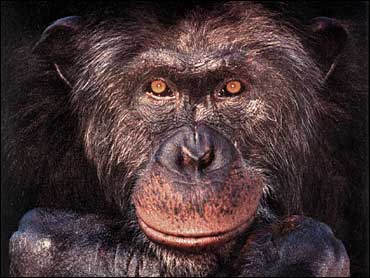 A canny chimpanzee who calmly collected a stash of rocks and then hurled them at zoo visitors in fits of rage has confirmed that apes can plan ahead just like humans, a Swedish study said Monday.

Santino the chimpanzee's anti-social behavior stunned both visitors and keepers at the Furuvik Zoo but fascinated researchers because it was so carefully prepared.

According to a report in the journal Current Biology, the 31-year-old alpha male started building his weapons cache in the morning before the zoo opened, collecting rocks and knocking out disks from concrete boulders inside his enclosure. He waited until around midday before he unleashed a "hailstorm" of rocks against visitors, the study said.

"These observations convincingly show that our fellow apes do consider the future in a very complex way," said the author of the report, Lund University Ph.D. student Mathias Osvath. "It implies that they have a highly developed consciousness, including lifelike mental simulations of potential events."

Osvath's findings were based on his own observations of Santino and interviews with three senior caretakers who had followed the chimpanzee's behavior for 10 years at the zoo in Furuvik, about 93 miles north of Stockholm.

Seemingly at ease with his position as leader of the group, Santino didn't attack the other chimpanzees, Osvath told The Associated Press. The attacks were only directed at humans viewing the apes across the moat surrounding the island compound where they were held.

However, he rarely hit visitors because of his poor aim, and no one was seriously injured in the cases when he did, Osvath said.

The observations confirmed the result of a staged laboratory experiment reported in 2006 by scientists at the Max Planck Institute for Evolutionary Anthropology in Leipzig, Germany. In that case orangutans and bonobos were able to figure out which tool would work in an effort to retrieve grapes, and were able to remember to bring that tool along hours later.

"Every time you can combine experimental and observational data and you get a consistent result, that is very powerful," said an author of the 2006 study, Joseph Call. "This is an important observation."

He noted that individual differences are big among chimpanzees so the observation might not mean all chimpanzees are capable of the same planning.

"It could be that he is a genius, only more research will tell. On the other hand our research showed the same in orangutans and bonobos so he is not alone," Call said.

Osvath said the chimpanzee had also been observed tapping on concrete boulders in the park to identify weak parts and then knocking out a piece. If it was too big for throwing, he broke it into smaller pieces, before adding them to his arsenal.

"It is very special that he first realizes that he can make these and then plans on how to use them," Osvath said. "This is more complex than what has been showed before."

The fact that the ape stayed calm while preparing his weapons but used them when he was extremely agitated proves that the planning behavior was not based on an immediate emotional drive, Osvath said.

For a while, zoo keepers tried locking Santino up in the morning so he couldn't collect ammunition for his assaults, but he remained aggressive. They ultimately decided to castrate him in the autumn last year, but will have to wait until the summer to see if that helps. The chimpanzees are only kept outdoors between April and October and Santino's special behavior usually occurs in June and July.

"It is normal behavior for alpha males to want to influence their surroundings ... It is extremely frustrating for him that there are people out of his reach who are pointing at him and laughing," Osvath said. "It cannot be good to be so furious all the time."

In Connecticut last month, a 200-pound pet chimpanzee once seen in TV commercials mauled a woman trying to help its owner lure it inside and cornered a police officer in his cruiser before he shot and killed it, authorities said

The owner has speculated that the chimp was trying to protect her and attacked the woman because she had changed her hairstyle, was driving a different car and was holding a stuffed toy in front of her face to get the chimp's attention.