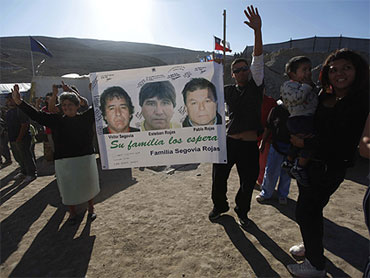 In less than a week the 33 miners trapped under Chile's Atacama Desert will have been stuck underground longer than any others in memory - taxing authorities with unique challenges on coaxing them and their families through the ordeal.

A team of submarine commanders was called in for advice on close-quarters living. NASA is advising on "life sciences" and giving the men a sense they control their own destinies. Exercise programs are in place so the miners are skinny enough to fit through a rescue hole.

Even a masseuse roams a makeshift camp for the miners' families, relieving tensions with a touch.

All in an effort to confront the unique challenges being faced by all involved to bring the miners out alive.

The miners were trapped by an Aug. 5 collapse, and rescuers established contact with them Sunday by drilling a 6-inch-wide hole to the shelter. That hole and two others are now lifelines, delivering supplies, communications and fresh air to the miners while they wait for an escape tunnel to be drilled.

Chilean navy Capt. Renato Navarro said officials called him and a team of submarine commanders in to counsel them on how to treat men stuck in close quarters.

"There are many similarities," said Navarro. "Submariners have to deal with the force of the sea on top of them, the miners with almost 700 meters of earth over them."

On Aug. 31, the men will have been trapped longer than any other miners in memory. Last year, three miners survived 25 days trapped in a flooded mine in southern China. Few other rescues have taken more than two weeks.

To meet the unique challenges, Chilean officials have asked NASA for advice on "life sciences" issues and technology that can help the miners, and the space agency will do what it can, NASA spokesman Mike Curie said.

NASA astronaut Jose Hernandez said via Twitter that the space agency, with its long research on aiding astronauts isolated in space, could help the Chileans understand how to provide "psychological support for those trapped."

That is something the Chilean rescue operation is wasting no time in doing.

Even though the miners have undoubtedly lost a significant amount of weight, officials are trying to ensure they don't bulk up before their rescue. They say the miners will have to be no more than 35 inches around the waist to make it out of the tunnel.

The escape tunnel will be about 26 inches (66 centimeters) wide - the diameter of a typical bike tire - and stretch for more than 2,200 feet (688 meters) through solid rock. That's more than 80 inches (207 centimeters) in circumference, but rescuers also have to account for the space of the basket that will be used to pull the miners to safety, one by one.

Chile's health minister, Dr. Jaime Manalich, said officials are planning exercise and other activities to keep the miners healthy and trim, using some of the passages that remain accessible to the miners.

"We hope to define a secure area where they can establish various places - one for resting and sleeping, one for diversion, one for food, another for work," Manalich said.

Establishing a daily and nightly routine is important, as is having fun, Manalich said. The rescue team is creating an entertainment program "that includes singing, games of movement, playing cards," he said. "We want them to record songs, to make videos, to create works of theater for the family."

Psychological help will be of great importance, mostly because of the long wait for a rescue.

Families said late Wednesday that antidepressants would be sent to the miners.

The notion of being trapped underground for up to four months, as has been suggested by some Chilean officials, is what the families of the miners say worries them the most about the men staying optimistic.

Interior Minister Rodrigo Hinzpeter said that it would be detrimental to tell the miners in detail how long it might take to dig them out - although he said they are aware it will take some time.

Family members said they think officials are overestimating the time the rescue will take, so as not to disappoint if there are problems. They add that the miners understand they are in for a wait and don't need to be protected from the truth.

But some mining experts think it will take far less than the four months to dig the resuce tunnel.

Larry Grayson, a professor of mining engineering at Penn State University, said it could take just 25 to 30 days. Gustavo Lagos, a professor at the Catholic University of Chile's Center for Mining, estimated the job could be done in two months if all goes well - but four months if glitches crop up.

Lilianett Gomez, whose father, Mario, is trapped in the mine, said she thinks the miners know their rescue won't be quick. "They know how long it will take for them to be rescued. As miners they know the work very well," she said.