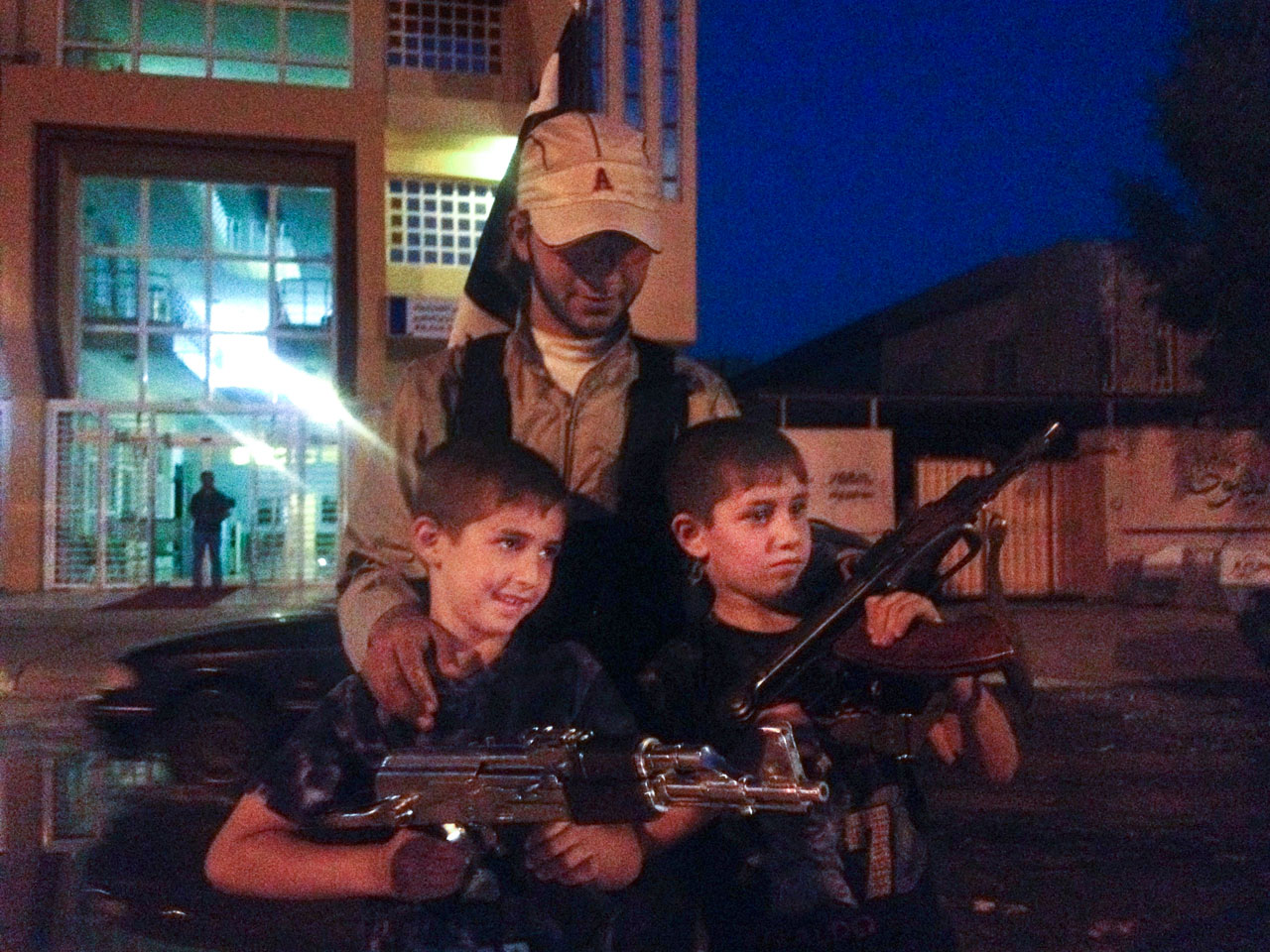 BEIRUT - Teenagers carrying weapons stand at checkpoints and busy intersections in Iraq's second-largest city, Mosul. Patched onto the left arms of their black uniforms are the logos of the Islamic Police.

In Raqqa, the Islamic State of Iraq and Syria's de facto capital in Syria, boys attend training camp and religious courses before heading off to fight. Others serve as cooks or guards at the extremists' headquarters or as spies, informing on people in their neighborhoods.

Across the vast region under Islamic State of Iraq and Syria (ISIS, also known as ISIL) control, the group is actively conscripting children for battle and committing abuses against the most vulnerable at a young age, according to a growing body of evidence assembled from residents, activists, independent experts and human rights groups.

In the northern Syrian town of Kobani, where ethnic Kurds have been resisting an ISIS onslaught for weeks, several activists told The Associated Press they observed children fighting alongside the militants. Mustafa Bali, a Kobani-based activist, said he saw the bodies of four boys, two of them younger than 14. And at least one 18 year old is said to have carried out a suicide attack.

In Syria's Aleppo province, an activist affiliated with the rebel Free Syrian Army said its fighters encountered children in their late teens "fairly often" in battles against the rival ISIS group.

Defense Secretary Chuck Hagel said recently the unmitigated brutality of ISIS has led to one of the most challenging periods in history for American leadership.

"I think our capacity is different because the threats and the challenges are far more diffuse and varied," he said. "I talked about asymmetric threats. I mean, the sophistication of ISIL, just take that for a moment. We've never seen an organization like ISIL that is so well-organized, so well-trained, so well-funded, so strategic, so brutal, so completely ruthless."

It is difficult to determine just how widespread the exploitation of children is in the closed world of ISIS-controlled territory. There are no reliable figures on the number of minors the group employs.

But a United Nations panel investigating war crimes in the Syrian conflict concluded that in its enlistment of children for active combat roles, ISIS is perpetrating abuses and war crimes on a massive scale "in a systematic and organized manner."

The group "prioritizes children as a vehicle for ensuring long-term loyalty, adherence to their ideology and a cadre of devoted fighters that will see violence as a way of life," it said in a recent report. The panel of experts, known as the Independent International Commission of Inquiry on Syria, conducted more than 300 interviews with people who fled or are living in ISIS-controlled areas, and examined video and photographic evidence.

The use of children by armed groups in conflict is, of course, nothing new. In the Syrian civil war, the Free Syrian Army and Nusra Front rebel groups also recruit children for combat, said Leila Zerrougui, the U.N. secretary-general's special representative for children and armed conflict.

But no other group comes close to ISIS in using children in such a systematic and organized way. And the effect is that much greater because ISIS commands large areas in which the militants inculcate the children with their radical and violent interpretation of Shariah law.

"What is new is that ISIS seems to be quite transparent and vocal about their intention and their practice of recruiting children," said Laurent Chapuis, UNICEF regional child protection adviser for the Middle East and North Africa, using an alternate acronym for the group. "Children as young as 10, 12 years old are being used in a variety of roles, as combatants as messengers, spies, guards, manning checkpoints but also for domestic purposes like cooking, cleaning, sometimes providing medical care to the wounded."

"This is not a marginal phenomenon. This is something that is being observed and seems to be part of the strategy of the group," Zerrougui said in a phone interview from New York.

She said some children join voluntarily for various reasons but others are targeted.

In areas of Syria and Iraq under their control, the Sunni extremists have closed schools or changed the curriculum to fit with their ideology. Their goal, according to the U.N., is to use education as a tool of indoctrination to foster a new generation of supporters.

A video recently published by an ISIS media arm shows what it says is a graduation ceremony for boys, who appear to be in their teens. Dressed in military uniforms, they are lined up to shake hands with a sheikh. Another scene shows the boys posing with AK-47s, their faces hidden under black masks. The video touts the children as a "generation of lions, protectors of religion, dignity and land."

Residents of ISIS-controlled areas said the militants are teaching children at school to become fighters.

One resident in the Iraqi city of Fallujah described seeing his 6-year-old son playing with a water pistol in front of the house and screaming: "I am a fighter for the Islamic State!"

"I waved him to come to me and I broke the gun in two pieces," said the man, who spoke on condition of anonymity out of fear of his life.

He also said he and his son recently stopped at an ISIS checkpoint. His son shouted, "We love the State!" and one of the fighters asked, "Which state?" When the son replied, "the Islamic State," the fighter "told him, 'Good boy,' and let us through," the resident said. The incident persuaded the man to move his family to the northern city of Kirkuk, now in Kurdish hands.

"The boys are studying, not to learn, but to become mujahedeen," he said.

Earlier this year in Syria, ISIS abducted more than 150 Kurdish boys, held them in a school in Aleppo province and showed them videos of beheadings and attacks, while subjecting them to daily instruction on militant ideology for five months, the U.N. and Kurdish officials said. The boys were later released.

In Raqqa province, an anti-ISIS activist collective has documented the presence of at least five known youth training camps, one specifically for children under 16 in the town of Tabqa. The collective, named Raqqa is Being Slaughtered Silently, has released a video showing children crawling under barbed wire as part of their military training. The video could not be independently confirmed but is consistent with AP reporting on the subject.

Residents in ISIS-controlled areas in Iraq, such as Mosul and Fallujah, say it is not uncommon to see gun-toting boys in their late teens standing at checkpoints and even younger ones riding in militant convoys, usually accompanying their fathers in parades.

Another resident of Fallujah said many boys as young as 11 volunteer to join the group, but that ISIS often seeks the parents' consent for those under 16. He said others join under pressure or in exchange for money.

"Once they're done training, their skills and abilities are tested before they decide where to send them off. Many want to be on the front lines," said the man, who identified himself as Abu Abdullah al-Falluji.

In a report released earlier this year, Human Rights Watch interviewed four former ISIS child fighters in Syria who described military training with the group. One, Bassem, who joined the group at 16, said he left after being seriously wounded by shrapnel in battle. A 17 year old, Amr, told the group that children in his unit signed up for suicide missions - and that he reluctantly did so as well under pressure.

Thousands of foreign fighters have flocked to ISIS areas from all over the world, many of them with their families.

A video emerged this month showing two boys, both speaking perfect French, holding guns aloft and claiming to be in Raqqa. They stand on a dusty street; a man walks by and takes no notice of their weapons. The boys, who look much younger than 10, say they're from Strasbourg and Toulouse. French prosecutors have opened a formal investigation to identify the children.

"Over there, you're in a country of infidels. Here, we're mujahedeen. We're in Syria, we're in Raqqa here," one of the boys says in the video. "It's war here."