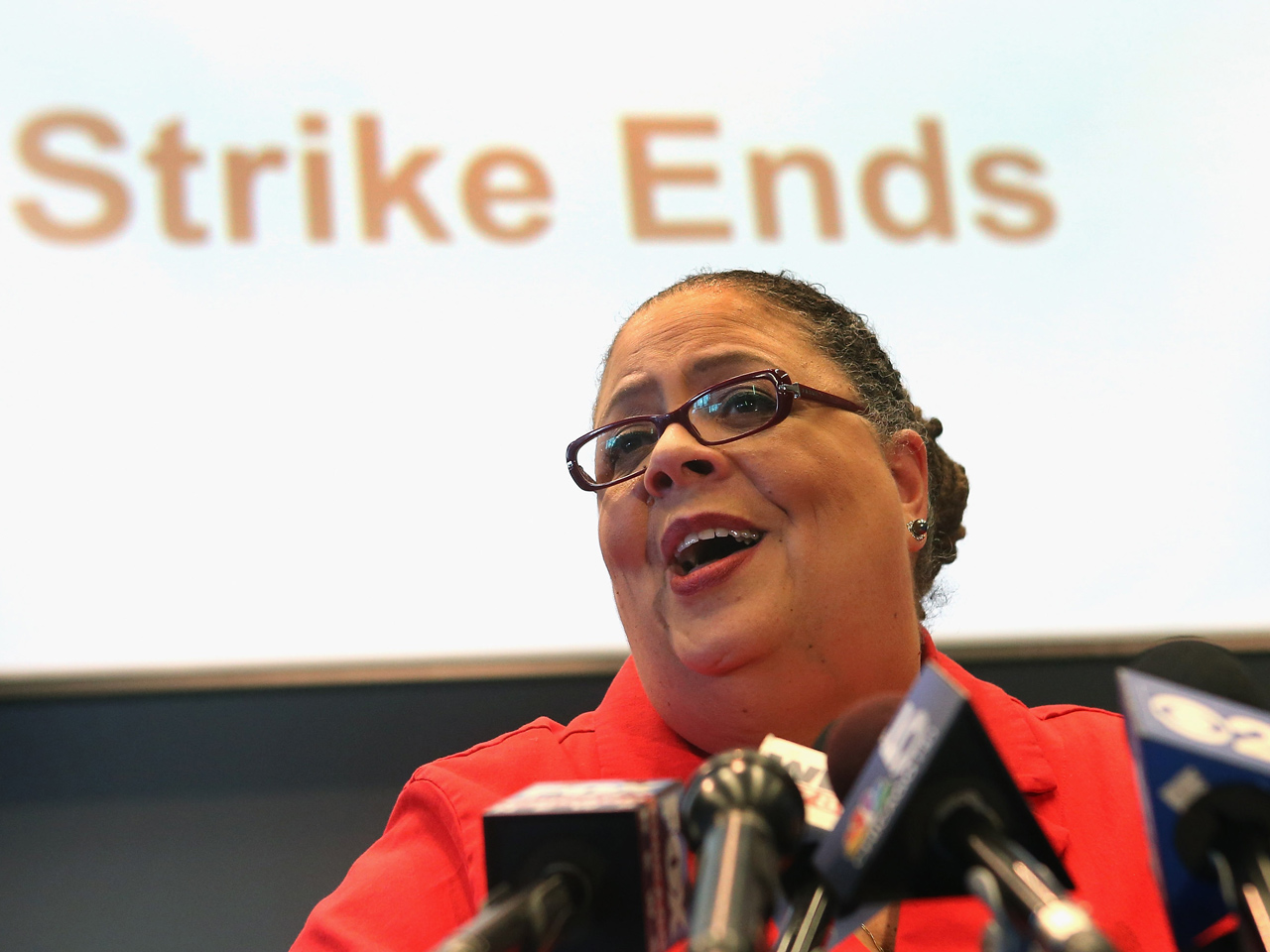 (CBS/AP) CHICAGO - Chicago's teachers agreed Tuesday to return to the classroom after more than a week on the picket lines, ending a spiteful stalemate with Mayor Rahm Emanuel over teacher evaluations and job security, two issues at the heart of efforts to reform the nation's public schools.

Union delegates voted overwhelmingly to formally suspend the strike after discussing details of a proposed contract settlement worked out over the weekend.

Delegates poured out of a South Side union hall singing "solidarity forever."

"I'm very excited. I miss my students. I'm relieved because I think this contract was better than what they offered," said America Olmedo, who teaches fourth- and fifth-grade bilingual classes. "They tried to take everything away."

Said Shay Porter, a teacher at the Henderson Academy elementary school: "We ignited the labor movement in Chicago."

An elementary school teacher, Karen Evans, said, as reported by CBS Chicago: "Everybody was extremely excited to hear the news that we're going back."

The walkout, the first in Chicago in 25 years, shut down the nation's third-largest school district just days after 350,000 students had returned from summer vacation. Tens of thousands of parents were forced to find alternatives for idle children, including many whose neighborhoods have been wracked by gang violence in recent months.

Union president Lewis said the union's 700-plus delegates voted 98 percent to 2 percent to reopen the schools.

"We said that we couldn't solve all the problems of the world with one contract," Lewis said. "And it was time to end the strike."

Tuesday's vote was not on the contract offer itself, but on whether to continue the strike. The contract will now be submitted to a vote by the full membership of more than 25,000 teachers.

The walkout was the first for a major American city in at least six years. It drew national attention because it posed a high-profile test for teachers unions, which have seen their political influence threatened by a growing reform movement. Unions have pushed back against efforts to expand charter schools, bring in private companies to help with failing schools and link teacher evaluations to student test scores.

The strike carried political implications, too, raising the risk of a protracted labor battle in President Barack Obama's hometown at the height of the fall campaign, with a prominent Democratic mayor and Obama's former chief of staff squarely in the middle. Emanuel's forceful demands for reform have angered the teachers.

The teachers walked out Sept. 10 after months of tense contract talks that for a time appeared to be headed toward a peaceful resolution.

Emanuel and the union agreed in July on a deal to implement a longer school day with a plan to hire back 477 teachers who had been laid off rather than pay regular teachers more to work longer hours. That raised hopes the contract would be settled before the start of fall classes, but bargaining stalled on other issues.

Emanuel decried the teachers' decision to leave classrooms, calling the walkout unnecessary and a "strike of choice."

Almost from the beginning, the two sides couldn't even agree on whether they were close to a deal. Emanuel said an agreement was within easy reach and could be sealed with school in session. The union insisted that dozens of issues remained unresolved.

Chicago's long history as a union stronghold seemed to work to the teachers' advantage. As they walked the picket lines, they were joined by many of the very people who were most inconvenienced by the work stoppage: parents who had to scramble to find babysitters or a supervised place for children to pass the time.

To win friends, the union representing 25,500 teachers engaged in something of a publicity campaign, telling parents repeatedly about problems with schools and the barriers that have made it more difficult to serve their kids. They described classrooms that are stifling hot without air conditioning, important books that are unavailable and supplies as basic as toilet paper that are sometimes in short supply.

As the strike entered its second week, Emanuel turned to the courts to try to force teachers back to the classroom by filing a lawsuit that described the walkout as an unlawful danger to the public.

The complaint sought a court order to end the strike, saying it was illegal because it endangered the health and safety of students and concerned issues — evaluations, layoffs and recall rights — that state law says cannot be grounds for a work stoppage.

A judge set a hearing for Wednesday, but the case was likely to be moot if teachers went back to class.

The strike upended a district in which the vast majority of students are poor and minority. It also raised the concerns of parents who worried not just about their kids' education but their safety. Chicago's gang violence has spiked this year, with scores of shootings reported throughout a long, bloody summer and bystanders sometimes caught in the crossfire.

The district staffed more than 140 schools with non-union workers and central office employees so students who are dependent on school-provided meals would have a place to eat breakfast and lunch. But most parents refused to leave their children at unfamiliar schools where they would be thrown together with kids and supervising adults they may never have met.

When the two sides met at the bargaining table, money was only part of the problem. With an average salary of $76,000, Chicago teachers are among the highest-paid in the nation. After weeks of talks, the district proposed a 16 percent raise over four years — far beyond what most American employers have offered in the aftermath of the Great Recession.

But the evaluations and job security measures stirred the most intense debate.

The union said the evaluation system was unfair because it relied too heavily on test scores and did not take into account outside factors that affect student performance such as poverty, violence and homelessness.

Emanuel did not personally negotiate but monitored the talks through aides.

The strike was just the latest and highest-stakes chapter in a long and often contentious battle between him and the union.

When he took office last year, the former White House chief of staff inherited a school district facing a $700 million budget shortfall. Not long after, his administration rescinded 4 percent raises for teachers. He then asked the union to re-open its contract and accept 2 percent pay raises in exchange for lengthening the school day for students by 90 minutes. The union refused.

Emanuel, who promised a longer school day during his campaign, attempted to go around the union by asking teachers at individual schools to waive the contract and add 90 minutes to the day. He halted the effort after being challenged by the union before the Illinois Educational Labor Relations Board.