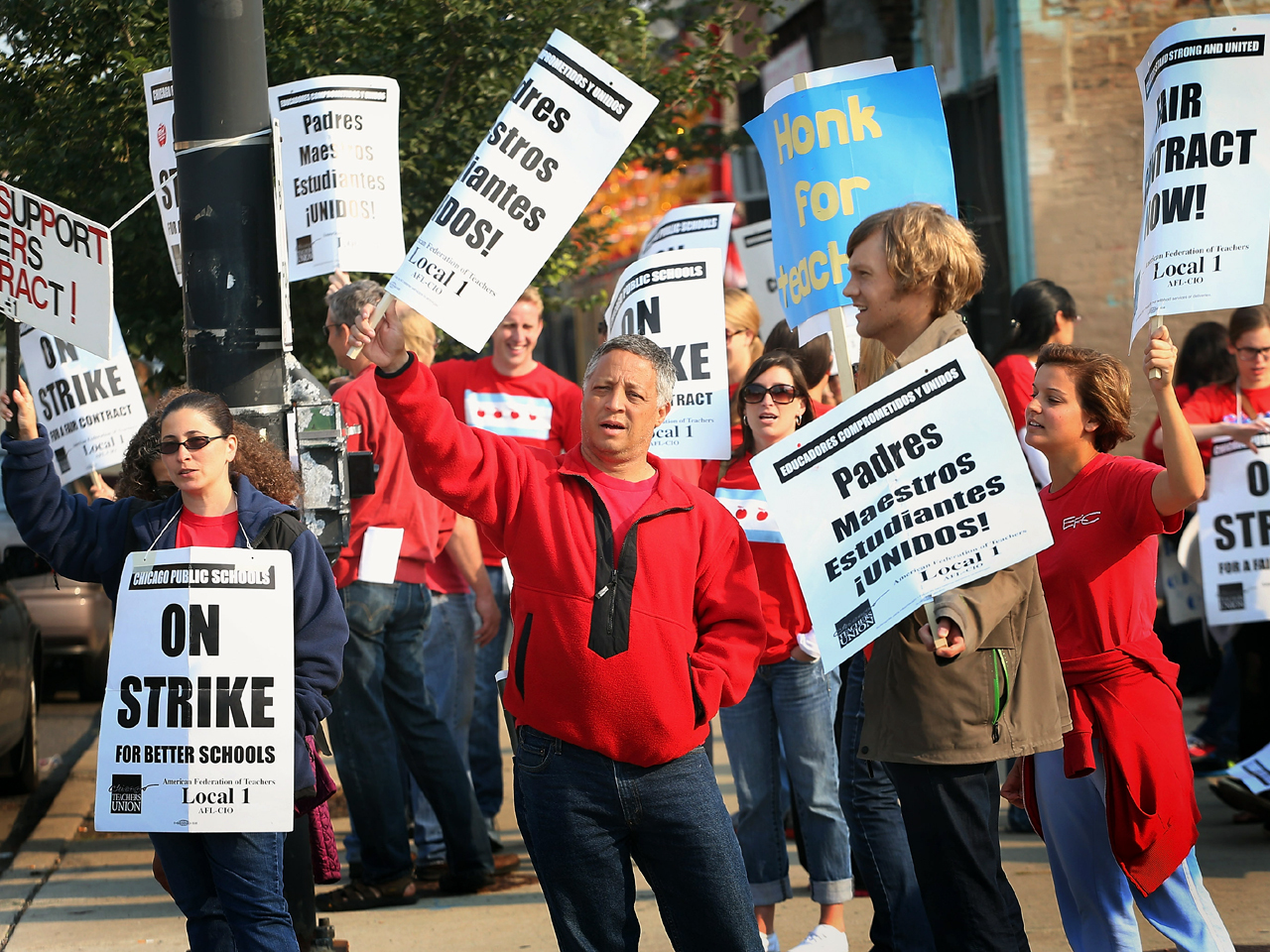 (CBS/AP) CHICAGO - Teachers in the nation's third-largest city will pore over the details of a contract settlement Tuesday as the clock ticks down to an afternoon meeting in which they are expected to vote on whether to end a seven-day strike that has kept 350,000 students out of class.

Some union delegates planned to take a straw poll of rank-and-file teachers to measure support for a settlement that includes pay raises and concessions from the city on the contentious issues of teacher evaluations and job security. But many warned the outcome remained uncertain two days after delegates refused to call off the walkout, saying they didn't trust city and school officials and wanted more details.

"It takes a lot to start a strike. You don't want to prematurely end it," said Jay Rehak, an English teacher and union delegate who planned to survey his colleagues at Whitney M. Young Magnet High School before voting at a meeting scheduled for 3 p.m.

It will take a simple majority out of more than 700 delegates to end the strike, CBS Chicago station WBBM-TV reports.

Karen Lewis, the president of the Chicago Teachers Union, told WBEZ Radio that she didn't expect a quick decision, saying that teachers still have a lot of questions. She said it's going to take a while for some delegates to feel comfortable with the provisions of the proposed settlement.

As parental support for the strike waned, teachers came under pressure to quickly decide on the tentative contract that labor and education experts — and even some union leaders — called a good deal for the union.

With temperatures dipping into the 40s Tuesday morning, a few dozen teachers gathered outside the Goethe Elementary School in Logan Square, a neighborhood in the west of the city.

Heath Davis, a seventh-grade science teacher, said he was optimistic that a vote Tuesday could end the teachers' first strike in 25 years, although concerns about the academic calendar, pensions and resources for special education have yet to be resolved.

"We don't want to move too quickly," said Davis, who is a member of the Chicago Teachers Union's House of Delegates. "We want to make sure our questions are answered,"

He said everyone is keen to return to the classroom.

"I'm desperately wanting to get back to my lab experiments with my kids," Davis said.

Irked by the union's two-day delay in voting on whether to send children back to school, Mayor Rahm Emanuel took the matter into court Monday. A judge has called a hearing for Wednesday morning to rule on the city's request for an injunction ordering the teachers back to work.

Members of at least one new parent group expressed frustrations that their children could not return to class after the teachers decided to stay out on Sunday.

"I was very disappointed," said Erica Weiss, who has been dropping off her 6-year-old daughter at a district-organized program each day but has to arrange for someone else to pick her up. She initially supported the strike, but more than a week was unnecessary, she said.

On Monday, teachers' picket lines appeared smaller and a passing jogger booed the teachers picketing at Mark T. Skinner West Elementary School on the near West Side.

"It's risky to extend the strike when everyone was expecting the strike to be over," said Richard Kahlenberg of the Century Foundation, a nonpartisan think tank in Washington.

Among the pending questions was whether Emanuel's lawsuit would stir up more trouble.

"If he wants teachers back in the schools, he should have stayed away from that type of action," Rehak said. "It only incites."

A labor law expert told WBBM-TV the mayor's choice to take the case to court was risky.

"This does not bode well. This is a bad thing. It's not good in the long term for resolving a dispute amicably. We all, Chicagoans, all have a vested interest in having this dispute being resolved in a way that is good and helpful in the long term," Northwestern University Law School associate professor Zev Eigen said.

Both sides have only released summaries of the proposed agreement. But outside observers said the tentative contract appears to be a win for the union's 25,000 teachers. While teachers in San Francisco haven't gotten an across-the-board raise in years, for example, Chicago teachers are in line for raises in each of the proposed deal's three years with provisions for a fourth. In Cleveland, teachers recently agreed to the same kind of evaluation system based in part on student performance that Chicago has offered.

"The district went past the halfway mark," said Kate Walsh, president of the National Council on Teacher Quality. "They got a pretty good deal."

Some union members in Chicago praised the school district's move on what percentage of test scores will be factored into teacher evaluations, down from the 45 percent proposed to the 30 percent set as the minimum by state law. It also includes an appeals process to contest evaluations. The new evaluations would be phased in over the length of the contract.The tentative contract calls for a 3 percent raise in its first year and 2 percent for two years after that, along with increases for experienced teachers. While many teachers are upset it did not restore a 4 percent pay raise Emanuel rescinded earlier this year, the contract if adopted would keep Chicago teachers among the highest-paid in the country. In Chicago, the starting salary is roughly $49,000 and average salary is around $76,000 a year.

The city also won some things from the union in the proposed settlement. Emanuel gets the longer school day he wanted and principals will have say over who gets hired at their schools, something the union fought. The district will be required to give some preference to teachers who are displaced and the school district will have to maintain a hiring list and make sure that at least half of hires are displaced teachers.