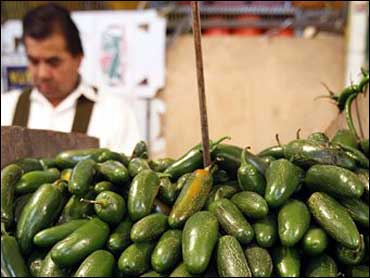 Chiliheads who savor the kick of hot peppers are sampling one of the earliest examples of chemical warfare.

In this case, it's a battle between the peppers and a type of microbial fungus that destroys their seeds, researchers report in Tuesday's edition of Proceedings of the National Academy of Sciences. They studied wild peppers growing in Bolivia.

The peppers use sugar and fats to attract birds that eat the chilies and disperse the seeds. The fungi also like fats and sugars, but they destroy the seeds.

"For these wild chilies the biggest danger to the seed comes before dispersal, when a large number are killed by this fungus," said Joshua Tewksbury, a University of Washington assistant professor of biology.

The fungus is spread by aphid-like insects, and in areas where they are more common, peppers had high levels of capsaicin, the chemicals that give peppers their heat, the researchers found. Capsaicin dramatically slows growth of the fungus.

"Capsaicin doesn't stop the dispersal of seeds because birds don't sense the pain and so they continue to eat peppers, but the fungus that kills pepper seeds is quite sensitive to this chemical," said Tewksbury.

On the other hand, peppers growing in areas where there are few insects, and thus little of the fungus, didn't bother to produce much capsaicin, some being as mild as bell peppers, the researchers found.

Tewksbury also suggested in a statement that capsaicin may also benefit people who eat hot peppers - one of the earliest domesticated crops in the Americas.

"Before there was refrigeration, it was probably adaptive to eat chilies, particularly in the tropics," Tewksbury said. "Back then, if you lived in a warm and humid climate, eating could be downright dangerous because virtually everything was packed with microbes, many of them harmful. People probably added chilies to their stews because spicy stews were less likely to kill them."

Joining Tewksbury in the study were researchers from the Autonomous University Gabriel Rene Moreno in Bolivia and the University of Florida. Funding was provided by the U.S. National Science Foundation and the National Geographic Society.