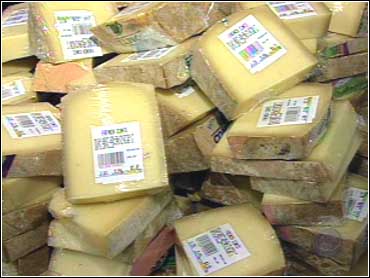 We British have an unrivalled reputation for discovery.

We invented the tent, the telephone and the box you're watching right now - TV. We even discovered the secrets of human life itself - DNA. And now, after years of painstaking research, our cutting-edge scientists have solved the ultimate mystery – the precise thickness of cheese for the perfect cheese sandwich.

The people who market cheese over here, the British Cheese Board, commissioned a specialist team at the University of Bristol. They locked themselves in a laboratory with huge slabs of Cheddar, Caerphilly, Blue Stilton, Double Gloucester, Wensleydale and Red Leicester. Truckloads of fresh cheese arrived every night. It was smelly but vital work. It also required the precision of new technology.

A robot was designed and built to replicate the aromas generated at the back of the nasal passages when a cheese sandwich is eaten. The concentration of these aromas is what gives us a perception of flavour - so they called the robot MS Nose. Its role was crucial. In clinical conditions, MS Nose was fed thousands of cheese sandwiches of every conceivable variety and of every imaginable thickness. MS Nose gobbled them up without complaint and then disgorged the data the world had been waiting for.

And this is it: a perfect Cheddar sandwich requires the cheese to be sliced thin – just slightly more than one sixteenth of an inch. Any more won't help. The trigger point for aroma is reached at 0.11032 of an inch. It wouldn't make any difference if you used half a ton of Cheddar.

For serious cheese lovers I can reveal some additional statistics. A sandwich made of Blue Stilton requires a measured slice of just less than one eighth of an inch. The weaker the cheese the more you'll need. Britain's mildest is Wensleydale – and it requires a quarter of an inch of the stuff to get the taste buds going.

A slice of tomato will help, or some pickle. Both contain the magic ingredient also found in cheese and butter - something called 2-methyl proponal.

But did it really need a team of top scientists and a robotic nose to reach these fairly obvious conclusions? After all there's something very familiar about cheese and tomato sandwiches with pickle. Like ...they've been around for years. Like ...we've just been conned. What a waste of money.