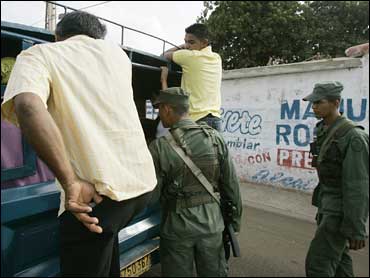 Venezuela is starting to block billions of dollars in Colombian imports and investment under orders from President Hugo Chavez, threatening economic havoc in both nations in response to a Colombian military attack on rebels hiding in Ecuador.

"We aren't interested in Colombian investments here," Chavez said, standing beside Correa. "Of the Colombian businesses that are here in Venezuela, we could nationalize some."

He said Venezuela will search for products from other countries to replace those from Colombia. Noting that Colombia traditionally supplies food to Venezuela, he said now "we can't depend on them, not even for a grain of rice."

Though Venezuelan officials express confidence they will quickly find replacements for Colombian goods, government critics say the move is bound to worsen shortages of basic foods from milk to chicken that were an annoyance in Venezuela well before a dispute that has ballooned into one of South America's most serious diplomatic crises in years.

Venezuela and Ecuador have each sent thousands of soldiers to their borders with Colombia. Colombian President Alvaro Uribe said Wednesday he would not mobilize troops.

U.S. Secretary of State Condoleezza Rice said Thursday that the United States wants to see a diplomatic solution. The United States offered unqualified support to Colombia in the dispute, in contrast to almost every other country in the hemisphere.

"I do hope there will be a diplomatic outcome to this," Rice said in Belgium. "The situation shows that everyone needs to be vigilant about the use of border areas by terrorist organizations."

One opportunity will be a meeting of the Rio Group, which began with ministerial meetings Thursday in the Dominican Republic. At least 12 Latin American presidents - including those from Colombia, Venezuela and Ecuador - are expected to meet Friday.

Bolivian Foreign Minister David Choquehuanca said the ministers would "see what we can do to help find a peaceful solution to this conflict through dialogue," although he added: "Solutions don't come overnight."

The Organization of American States on Wednesday approved a watered-down resolution calling Colombia's cross-border raid Saturday on the Revolutionary Armed Forces of Colombia camp a violation of Ecuador's sovereignty. It was sending a top-level delegation to help ease tensions, but stopped short of explicitly condemning the attack.

Chavez and Correa warned Wednesday night that the crisis would not end without clear, explicit international condemnation of the raid.

"The OAS resolution pleases us. We are pleased, but not satisfied," Correa said as he visited Chavez in Caracas. "This isn't going to cool down until the aggressor is condemned."

People prepared for marches Thursday in major Colombian and Latin American cities, as well as in the United States and Europe, to condemn Colombia's right-wing paramilitaries, which were formed to counter the guerrilla threat but grew into a threat of their own. The marches come a month after similar anti-guerrilla marches that drew millions into the streets.

Chavez called the attack by Colombia's U.S.-allied government a "war crime." The bombing and raid killed a top rebel leader, Raul Reyes, and 23 other guerrilla fighters who had set up a base just over a mile from the border inside Ecuador.

Colombia has accused both Chavez and Correa of ties with the leftist rebels, and said that was shown by documents found on a laptop seized at the bombed rebel camp. Chavez laughed as he dismissed the accusations Wednesday.

Other documents released by Colombia suggest Reyes was secretly negotiating with representatives of France and other European nations to win freedom for hostages including French-Colombian politician Ingrid Betancourt and three American defense contractors.

French President Nicolas Sarkozy appealed directly to the rebels in an interview broadcast Wednesday night on Colombia's RCN television. He said Betancourt's release could persuade countries to no longer consider the FARC a terror group.

"If they let Ingrid Betancourt die, of course, there will be no discussion about that," he said in comments dubbed over in Spanish. "If they free Ingrid Betancourt, maybe some place in the world will see them a little differently."