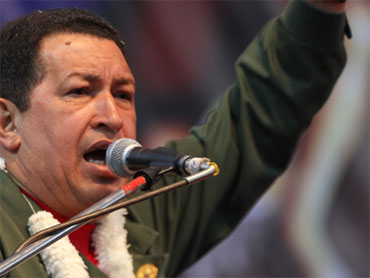 President Hugo Chavez urged supporters to use Twitter to blow the whistle on currency speculators on Sunday and announced that police raids on illegal traders would continue as Venezuela's government tries to defend the embattled bolivar.

The socialist leader asked Venezuelans to send messages identifying illegal traders. He described them as "thieves" who must be punished for currency speculation, which he blames for rapidly rising inflation.

"My Twitter account is open for you to denounce them," Chavez said during his weekly radio and television program. "We're going to launch several raids. We've already launched some raids, thanks to the complaints from the people."

Venezuelan authorities began raiding currency trading offices last week and arrested a man who posts black-market rates for currency on the Internet. Jaime Renteria, 52, is apparently the first person arrested for illegal currency trading under Chavez's new crackdown, which has been prompted by a sharp decline in the free-market value of the bolivar.

Renteria is the registered administrator of notidolar.com, a website that offered visitors a chance to exchange Venezuela's bolivar currency, according to version cached by Google.

His downtown Caracas office was one of four raided Friday night, according to the government's Bolivarian News Agency. There was no answer at Renteria's phone number on Sunday.

The crackdown on traders and threats to punish websites that report the bolivar's decline on the black market has alarmed economists, who predicted on Sunday that the measures will backfire.

"It's a Draconian system," said Asdrubal Oliveros, an analyst at the Caracas-based Ecoanalitica think tank. "Unfortunately this new scheme is going to end up increasing inflation, bringing about shortages of products and creating more distortions in the currency market."

Oliveros believes the bolivar's slide is largely caused by uncertainty over the government's efforts to control trading of U.S. dollars on Venezuela's black market and in the bond market previously dominated by brokerage firms.

Friday's raids were prompted by Chavez's demands for officials to halt regulated trading. Federal Police Chief Wilmer Flores said investigators "gathered criminal evidence" at the offices of informal exchange businesses, so prosecutors can "determine criminal liabilities of the owners of these establishments."

Chavez joked last week that he could attempt to capture illegal foreign currency traders himself, posing as a potential buyer on Internet sites only to apprehend the dealers later. "I'm going to grab a computer and begin to buy those dollars ... but it's to capture them," he said.

He urged authorities to get tough with websites that violate long-ignored laws against publishing the black-market rate. Within hours, three popular blogs that offer currency trading services or publish the value of the bolivar against the dollar vanished from the Web.

The bolivar has been steadily sliding on the unregulated market, increasing in recent weeks to about 8.20 bolivars to the dollar - almost twice the official rate of 4.30 applied to nonessential goods.

The government is worried because the rising price of dollars on the so-called parallel market increases the cost of consumer goods in Venezuela, which imports more than half the products it consumes despite Chavez's efforts to boost domestic production.

Consumer prices jumped 5.2 percent in April alone, driving the annual inflation rate to 30.4 percent - the highest in Latin America - according to the Central Bank and National Statistics Institute.

An average of 1.4 million dollars is exchanged daily either on the black market or at the floating rate through the government bond market - a total of $28 billion in 2009, according to Ecoanalitica.

Last week, Venezuela's predominantly pro-Chavez National Assembly approved a bill tightening currency dealing rules and giving the Central Bank exclusive control over trading in government bonds - a market where the bolivar also has been sliding. The law bars brokerages from operating in the parallel dollar market through bond trading.

Chavez signed the bill into law on Sunday, saying it would take effect this week upon its publication in the Official Gazette.

"This is to combat speculation of the dollar," Chavez said of the legislation.