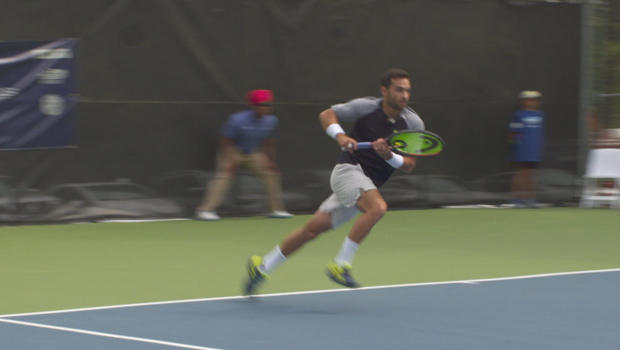 When tennis champion Roger Federer hauls his own gear, it's a gag, for a NetJets commercial. Superstardom means global fame, big money, limos and private jets.

When you're one of the other top 200 professional tennis players in the world, however; when your ranking is, say, in the 170s, and you show up to play in the Little Rock Open, in Little Rock, Arkansas – you pick up your own bags at the airport carousel and you find your own transportation.

"Hi, this is Noah Rubin. I was wondering if a car can possibly pick me up from the airport?"

The hotel put him on hold. "I'm not sure if they're getting back," he said.

They didn't. "Hi, I was just on the phone with you guys. I don't know if I lost you or something …"

To be unknown is to practice patience.

Noah Rubin, you should know, has played Roger Federer, at the third round of the Australian Open in 2017.  Federer is one of the greatest tennis players of all time; Noah's top ranking was 125th in the world. If he'd beaten Federer, you would have heard about it, and a few more people would know his name. And he might not be traveling solo today.

He's been playing pro tennis for about three-and-a-half-years. So, asked "Sunday Morning" senior contributor Ted Koppel, "You have a manager? You have a coach? You have a masseuse? You have a travel agent? Where are all those people?"

"You know, that was a dream of mine – you're gonna have this whole team backing you every step of the way," Rubin replied. "But you only see that at the top. You know, all the players, my friends around me, we don't have anybody. We're supporting each other."

Forbes magazine compiles an annual list of the world's highest-paid athletes. Among all athletes in all sports, Roger Federer ranked 5th with earnings of $93.4 million. Rubin's earnings this year should be somewhere north of $100,000, before taxes.

Koppel said, "Most folks watching this program will say, 'Well, not a fortune, but not bad!' But that's before expenses. Talk about the expenses."

"I'm nomadic. I live on the road. So, this is my life, and this is what I have to pay for. But at the end of the year, you're not making that much money."

Tennis has been a central feature of Noah's life since long before he cared about expenses. In his freshman year at Wake Forest University, he was named Atlantic Coast Conference Player of the Year. At age 18, he qualified for Wimbledon's Junior Championship, and he won it.

Now 23, Rubin's professional career would really move into high gear if he can break into the world's top 100 players. As it is, he plays twice as many tournaments as Federer or Rafael Nadal. "Yeah. Federer plays about 12 tournaments a year, and, you know, I'm getting to about 30!" he laughed. "Because I have to."

Take the Little Rock Open Challenger, for example. "A challenger is basically like AAA baseball," said tournament director Chip Stearns. "It means that all the players that are playing this level are at the doorstep of playing the very-highest-level tennis."

On one level, like the officiating, the Little Rock Open is conducted just like a Grand Slam event. On the other hand, the ball boys and girls are a little younger than at the U.S. Open. Stearns said, "It's hard enough for, you know, a kid no matter what the age, to be able to concentrate.  But they're out there doing the best they can. And they do it because they love tennis."

A description many have used is The Grind. "The Grind, that's exactly what these guys are doing," said Stearns. "All the top Americans have pretty much gone through this, The Grind."

There are moments – last summer, at the Citi Open in Washington, D.C., for example – when Rubin seemed to reach his full potential.  He beat fellow American John Isner, ranked #9 in the world.

Koppel said, "Not only is [Isner] a great tennis player, he's 6'11". He's got this incredible wingspan."

"Just about. On a day like that, you must walk off the court saying, 'Well, maybe'?"

"I have the utmost faith in myself. I really believe that I can make it if I put the effort into it. It just comes a point where, what does 'making it' mean?"

It means grinding through tough competition at events like the Little Rock Open Challenger, where a good crowd most days may number 40 or 50.

The competitors are first-rate tennis players. If you lose in the first round of the tournament, you make $320. Winning will get you around $800. Rubin won his first two matches in Little Rock, but he got knocked out in the third round. His total earnings? $1,290, which meant that, after expenses, he essentially broke even.

By late June, Rubin was in London at Wimbledon playing, and winning, three qualifying matches just to get into the granddaddy of all Grand Slam tournaments. He was knocked out in the first round.

But, get this: Even losing in the first round at Wimbledon, Rubin earned close to $50,000. Big tournaments, big money!

Fast forward to hot and sticky New York City this past week. Rubin faced another three qualifying matches to get into the last Grand Slam event of the season, the U.S. Open.

This is home turf for Rubin: friends, family, teachers: "It tends to be just a lot, just a little too much," he said. "Because people that haven't seen you play tennis before but know about you. And then you might lose a tough match, which I have before, and they're like, 'Nice try, Noah.' And honestly, it tears at me a little bit, it really does."

It's the sort of story Rubin might have shared on his Instagram, Behind the Racquet.  Other players have opened up with stories of loneliness and eating disorders on tour. One player talked about his stutter; another, about her depression:

The modest success of Behind the Racquet has prompted speculation that Rubin might be looking for an "off-ramp" – getting away from The Grind:

"I'm not at all," he told Koppel. "I think I'm actually finding ways to deal with the tennis world a lot. And honestly, doing these Behind the Racquet stories, it's almost like a minor therapy for myself. Because I'm finding out that I'm not one of one, I'm one of many. And there's a lot of people dealing with the same things I'm dealing with. And I think we're helping each other out."

Rubin was eliminated in his second qualifying match and he will not be playing in the U.S. Open this year.  The usual headliners will be there: Roger, Rafa, Novak… but Noah? Maybe next year.