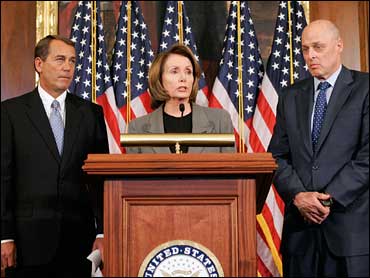 (AP Photo/Susan Walsh)
At 10 a.m., House Speaker Nancy Pelosi tried in vain to leave the posh Mayflower Hotel in Washington, D.C., after a speech on healthcare.

Reporters swarmed around the speaker in the lobby wanting confirmation that House Democrats, Republicans and the White House finally reached a deal on an economic stimulus package to give the economy a boost and avoid recession.

But Speaker Pelosi would not confirm.

Would she classify it as a tentative deal?

Pelosi said when they're ready on a deal, she'd meet with the Democratic caucus. Presumably to get the Party on the same page and ease opponent's fears.

She said they were close and that she was hopeful when she finally reached the exit.

Then, Pelosi managed to break away from the pack, hopped into her black SUV and sped away.

When a reporter can't get the details on the record from the actual newsmaker, they must move to other sources. Capitol Hill and White House producers started working the phones and email, trying to find out if there was, in fact, a deal and what was in it. And we looked for signs.

Sign that Democrats were still negotiating: Pelosi postponed her weekly press availability. Word was she was still trying to ease concerns in the Democratic caucus. They'd already given up increasing food stamps and an extension on unemployment benefits.

Sign that they were near a deal: House Republicans kick off a retreat today in Greenbrier, West Virginia. But House Minority Leader John Boehner was not spotted on the train this morning and we had confirmation that he was still in Washington, DC.

Back on the the Hill, we hunted for any details that might be included in the deal.

We learned that the package would consist of tax rebates. Six-hundred dollar rebates for singles who make less than $75,000 per year and $1200 for couples who make a combined income of $150,000. There would also be an additional $300 in rebates for each child.

And if you don't pay federal income taxes? Unlike Bush tax cuts in 2003, you're still eligible for 50 percent of those amounts and the full kid credit.

The other major plans are to provide tax breaks for small businesses; and there's even a provision that would help folks caught up in the subprime mortgage crisis. The package is expected to total 150 billion dollars.

Just after lunch, Speaker Pelosi's office released a statement announcing a press conference at 1:30 p.m. with Treasury Secretary Paulson, Pelosi and House Minority Leader John Boehner. Sure sign that there's definitely a deal if all sides are willing to go in front of the cameras together and face the press.

And a deal there was. The three negotiators arrived 15 minutes late, but they delivered on their promise to introduce a proposal to jump-start the economy.

Tax rebate checks, business incentives and relief for homeowners. Speaker Pelosi hopes to get the bill to the floor as soon as possible even though she admits that she's not exactly happy with the bill.

And most surprisingly, the bipartisan goodwill still seemed alive between the Speaker and Minority Leader. But Pelosi and Boehner are just two members of the House. Let's see what happens next week when the other 429 members get to weigh in as well.