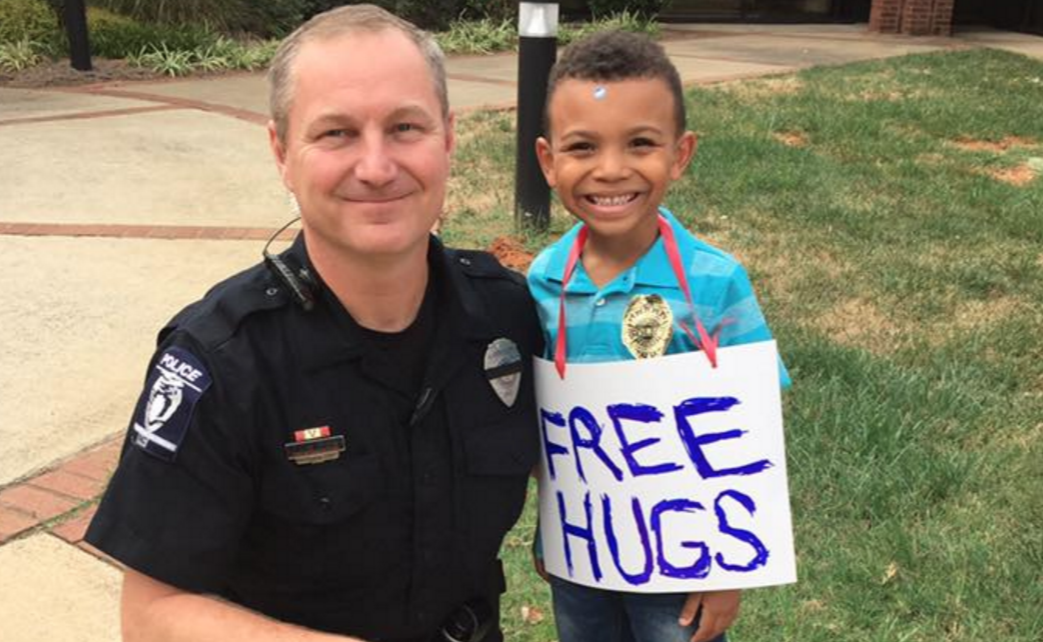 A 5-year-old boy’s response to the violent protests in Charlotte, North Carolina, is touching hearts across the country -- his parents included.

Deanna Hooker describes her son, Jayden, as an “old soul,” which is why she wasn’t surprised by the kindergartner’s request to visit police officers after learning several were hurt during a Tuesday night demonstration over the fatal police shooting of 43-year-old Keith Lamont Scott.

“I want to give them hugs so they’re not scared,” the little boy told his mom.

The Hooker family lives just three-and-a-half miles away from where Scott was shot and killed. So, when protests erupted nearby, the little boy could hear the commotion outside his window.

Helicopters shook the home and sirens screeched as hundreds of protesters took to the streets.

Jayden, who was in bed at the time, woke up upset, and called for his parents.

Hooker tried to explain what was happening as best she could.

Early Wednesday morning, Jayden started asking his mom more questions about the protests. When he overheard a news station report that officers were injured, he asked his mom if he could stay home from school to visit the police station.

The mom turned him down at first, but eventually, she agreed. He could visit the officers after school.

“It’s something that he asked us and when we said no he kept persisting to do it,” Hooker told CBS News. “It kind of opened our eyes and we eventually said yes because it’s a beautiful thing.”

After school on Wednesday, Jayden picked out his favorite glazed doughnuts and drew a sign that said “Free Hugs” on it, wearing it proudly around his chest.

As the car pulled into the parking lot of the Charlotte-Mecklenburg Police Department, the 5-year-old could hardly contain his excitement. He walked toward the building eager to offer the officers a hug and a doughnut.

The cops were in tears -- and so was Jayden’s mother -- as they kneeled down to accept hugs from the little boy.

“I’m so proud of my son,” Hooker said. “I think it honestly shows you that a 5-year-old can teach us a lot about how we should treat each other during times like these.”

Hooker said her child was taught that “when you hit somebody, it’s not good to hit them back.”

Now Hooker knows that her son has really taken that message to heart.

“Hate doesn’t do anything but spread the hate; it’s his mission to spread love and positivity,” Hooker said. “He’s a very cool kid.”