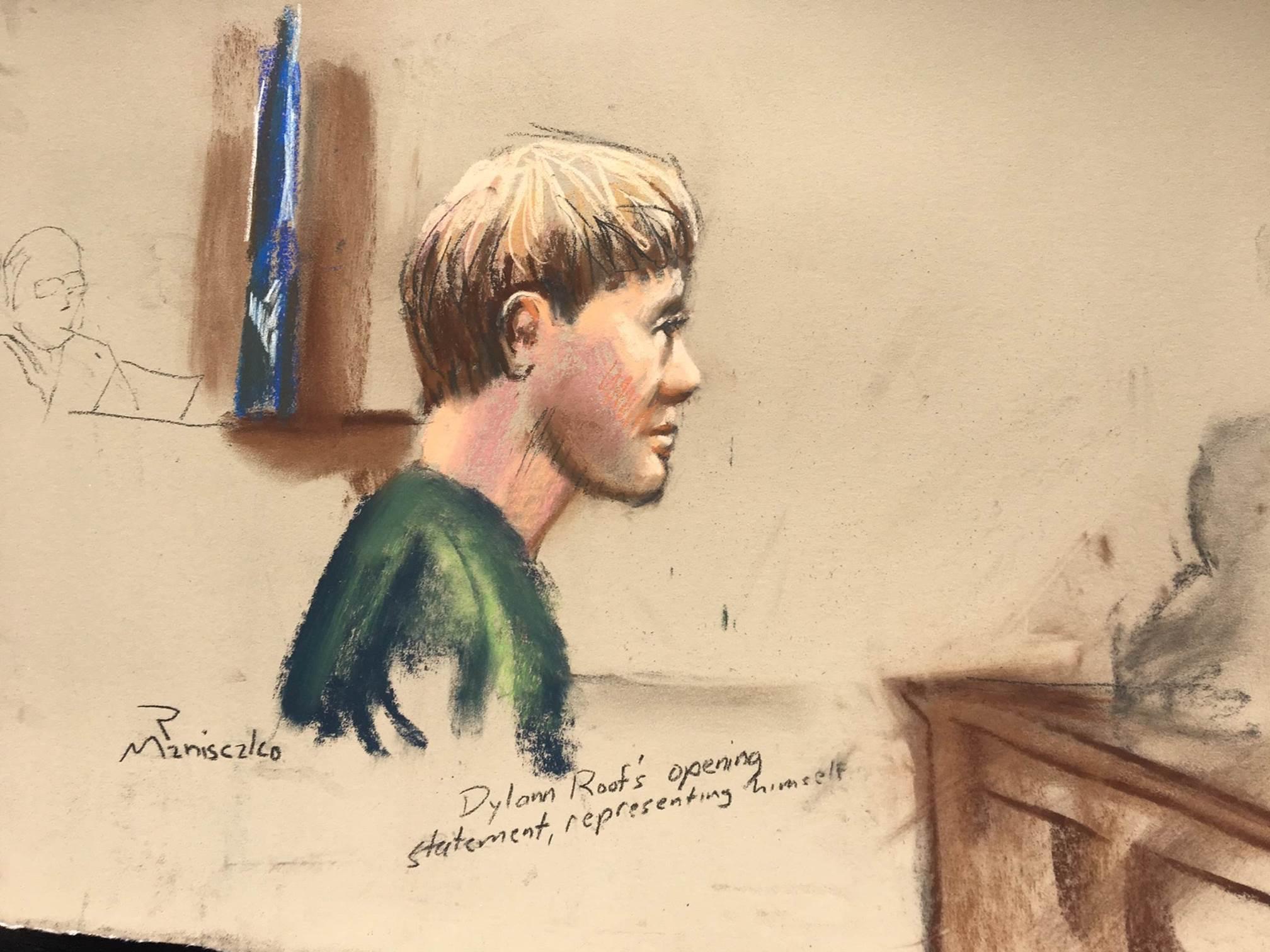 CHARLESTON, S.C.  - Convicted Charleston church shooter Dylann Roof spoke to the jury for the first time at his death penalty trial Wednesday, telling them there’s nothing wrong with him psychologically and that he is not trying to keep any secrets from them.

But perhaps most important is what he didn’t say: He didn’t ask jurors to spare him from the death penalty. The jury last month unanimously found Roof guilty of hate crimes and other charges in the shooting deaths of nine black church members during Bible study. The jurors will now decide whether he should be sentenced to life in prison or death.

“My opening statement is going to seem a little bit out of place,” the soft-spoken 22-year-old white man said calmly as he stood in front of a podium, occasionally glancing at notes. “I am not going to lie to you. ... Other than the fact that I trust people that I shouldn’t and the fact that I’m probably better at constantly embarrassing myself than anyone who’s ever existed, there’s nothing wrong with me psychologically.”

Jennifer Pickney, the wife of Mother Emanuel pastor Clementa Pickney, testifed that while she hid under a desk in church office with her 6-year-old daughter, her daughter asked “mama, is daddy gonna to die?” By then, Pickney lay among the dead and the dying, CBS News’ Mark Strassman reports.

At one point, Roof objected to the sheer number of people testifying, but the judge reminded him that is because there are so many victims.

Roof’s attorneys have indicated that he chose to represent himself during the sentencing phase of his trial because he was worried they might present embarrassing evidence about himself or his family. They have not said what that evidence may be, but as early as last summer, they had planned to introduce evidence that Roof suffers from a mental illness. Since then, many motions have been filed under seal, purportedly to conceal sensitive information, but it’s likely more details on what lawyers planned to present.

It’s clear, from his own writings, Roof doesn’t believe in psychology. In a journal read in court during his trial, Roof called the specialty “a Jewish invention” that “does nothing but invent diseases and tell people they have problems when they don’t.”

“I want to make it crystal clear I do not regret what I did,” Roof wrote six weeks after the murders. “I do not shed a tear for the innocent people I killed.”

Prosecutors said Roof deserves the death penalty because he painstakingly chose to target vulnerable people during Bible study at Emanuel AME Church in June 2015. Roof sat with the church members for about 45 minutes and waited until their eyes were closed before opening fire. He told Polly Sheppard, one of the three survivors, that he wanted to leave her alive to tell the world why he attacked a historic African-American church. He said “you’re raping our women and taking over the nation.”

Prosecutors plan to call up to 38 people related to the slain and the survivors. Williams told jurors they would hear extensive testimony about the nine victims, including pastor and state Sen. Clementa Pinckney, a “prodigy of the ministry” who was a man of faith, service and family dedication.

Roof, who is representing himself, made no objections as photos of late church pastor Clementa Pinckney were introduced as evidence, reports CBS News affiliate WCSC-Charleston.

As the photos were displayed, Pinckney’s wife Jennifer described him as a family man who started preaching at a young age and loved to wear uniquely-patterned socks.

He mostly wore slacks when they first met, but she eventually got him into wearing jeans and following football.

The prosecutor also read a portion from a journal found in Roof’s jail cell six weeks after his arrest in which Roof said he had not wept for any of the victims.

“I remember how I felt when I did these things and how I knew I had to do something and then I realize it was worth it,” Roof wrote, as a handwritten page from his journal appeared on screens in the courtroom. “I would like to make it crystal clear. I do not regret what I did. I have not shed a tear for the innocent people I killed.”

As their first witness, prosecutors called Pinckney’s widow, Jennifer Pinckney. During more than an hour on the stand, Pinckney described her husband as an affable figure who garnered respect from all corners in his roles as legislator and preacher but was a goofy family man in private with his two young daughters.

Prosecutors said they would question Pinckney about the night of the shooting when court resumed after a lunch break.

Roof was found competent to represent himself during two different hearings, one before the trial and another one within the last week. He has said he doesn’t plan on calling any witnesses or introduce any evidence.