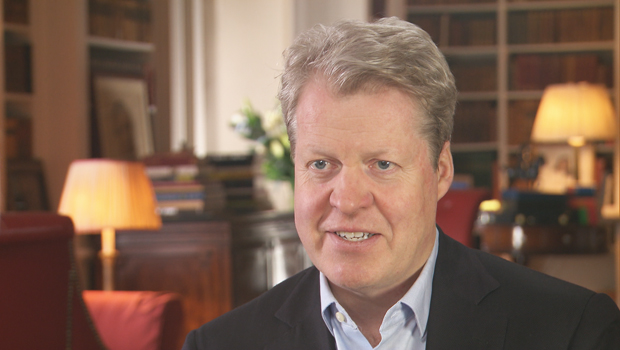 "Minding his manor" is where you're most likely to find Charles, the Earl of Spencer. Many Americans still remember him for the eulogy he delivered years ago for his sister, Diana, Princess of Wales. His stately home has seen a great deal of history, as Tracy Smith now shows us:

Two hours north of London, the Althorp estate is 13,000 acres of English farmland and forest: a spread roughly the size of Manhattan, and upon which sits one very grand house.


At 506 years old, Althorp House is truly magnificent. But oh, the upkeep.

Charles, the 9th Earl Spencer, is the owner and current caretaker.

It's been the Spencer family home since it went up in 1508. It hasn't changed all that much.

But it's a pretty nice place to "pass through." Each and every room is ridiculously beautiful, with furniture that often pre-dates the American colonies.

But even in this living museum, there are clues that a real family lives here.

"What strikes me is that you have all these beautiful formal portraits," said Smith, "and then family photos like any of us would have in our house."

Charles pointed to one family shot: "This is last month with my seven children, which is not bad for a Protestant!"

And sometimes those kids run the house: "I've still got little children 'cause I've got quite a range of kids. But they go down the main staircase on trays, you know, like breakfast trays, really fast. And I just think that's great. You gotta enjoy the place!"

"They sled down the main staircase on trays?"

"I did it, my father did it," said Charles. "I think it's a bit of a family tradition."

History is in the walls here, and ON them. Charles is an historian by trade, and found inspiration very close to home.

"Well, Charles I was a disastrous king," he said. "He sort of brought to the surface a war that, rather like your American Civil War, remains the bloodiest conflict this country's ever been involved in. So that was a big surprise to me how hopeless he was."

The king was found guilty of high treason, and in 1649 he was beheaded.

The king, by all accounts, met his death with dignity. But when Charles II, his son, regained the throne a decade later, he took note of the men who signed his father's death warrant, and went after them all.

Smith said, "The first men that he brought to trial were drawn and quartered, which we all have heard that phrase, but the meaning of it is quite gruesome."

"Well, it is a gruesome process," said Charles. "And I'm not sure how much it would really be suitable for a Sunday morning audience! But it basically involves mutilation before death, and being hanged until you're unconscious but not dead, and being tortured in the most horrific ways."

Spencer describes just how horrific in his book about a pretty brutal chapter of British history, "Killers of the King" (Bloomsbury).

And speaking of agony, the owners of this grand estate suffered greatly for years under the British tax code.

"You must take a certain amount of pride in that that you've managed to keep it alive," said Smith.

"I'm proud of my family," said Spencer. "But my grandfather lived here through the '50s and '60s and '70s when his income tax rate was 98%. And that's heroic, to keep somewhere like this going under that sort of regime where it was almost impossible."

It seems the heroes are everywhere here: Besides saving the estate, Charles' grandfather was also wounded in the First World War. Charles' father fought the Nazis, and years later, after suffering a stroke, willed himself to walk his daughter, Diana, up a very long aisle.

Back then, as brother of the bride, Charles was a target for the British press.

"I look at Pippa Middleton now, and I suppose I occupied a similar slot to her a generation ago," he said.

"You were the Pippa of your day!" said Smith.

"I was, without the fine derriere," he laughed.

On the press, Spencer said, "They basically invent a sort of family, and then there's the naughty sister or whatever, you know, the tricky brother."

"So you were the tricky brother?"

"No, I was the naughty brother. I think that's what it was. In fact, I was taken aside right at the beginning when Diana was first married, these two journalists came up to me and they said, 'Well, we've all decided you're gonna be the ne'er-do-well brother. Do you want to work with us or against us?' And I didn't want to work either way. I just wanted to get on my life!"

Of course, Diana had it a lot worse, as Charles pointed out at her funeral:

"It is a point to remember that of all the ironies about Diana, perhaps the greatest was this: a girl given the name of the ancient goddess of hunting was, in the end, the most hunted person of the modern age."

"I've never watched it," he said of his eulogy. "But I do remember from the time that towards the end I could barely speak. And so I was having to sort of punch my own base of my stomach with my stomach muscle to force out the last few sentences."

"We give thanks for the life of a woman I am so proud to be able to call my sister, the unique, the complex, the extraordinary and irreplaceable Diana, whose beauty, both internal and external, will never be extinguished from our minds."

The moment he can't bring himself to watch may have been his finest. Charles says it took him only 90 minutes to scrawl out his heart-rending speech, and in his portrait at Althorp, it's what he carries in his hand.

Smith asked, "Do you let yourself think about the fact that she would be a grandmother now?"

"Well, I did think that was the one sadness actually," he replied. "I mean, the great sadness was that when the joy of this birth happened, she wasn't around. But I also found it very sad at William's wedding actually, 'cause obviously she adored her son. And that was a great sadness, a great absence."

"Yeah, I met someone the other day who was so interesting, she had actually lost her sister in a car crash, in fact the same time. And I said, 'How is it for you?' And she said, 'Well, the pain's the same, it's just the tears are less.' And that's very profound. Anyone who's watching this who's had a family tragedy (which pretty much everyone has) can connect with that. To lose a very young sibling is a tough one."

Today, on a tiny island in a small lake near the main house, Diana lies in quiet seclusion.

But Althorp has always been a refuge. During the London Blitz, children were evacuated here to escape the German bombs.

Today, it's a haven for endangered birds.

And for the 9th Earl Spencer, it's a refuge as well.

"Living in an historical environment, as an historian, you really do get a sense of how short life can be," he said.

Short, maybe, but as a place like Althorp reminds us, life can also be pretty glorious.