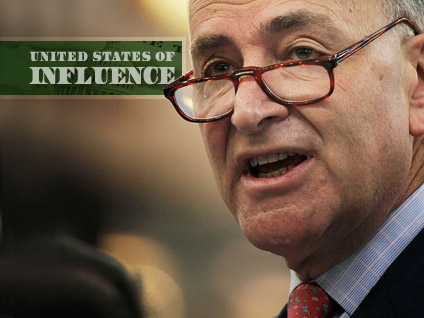 It was the fall of 2008 - the thick of the financial crisis - and Sen. Charles Schumer had a problem.

During his rise to become the powerful third-ranking Democrat in the Senate, the New Yorker had aggressively cultivated an image as a true liberal Democrat, someone who put hardworking middle-class Americans ahead of special interests. It was a characterization he pushed in his frequent television appearances; In his book "Positively American," Schumer alluded to a fictional middle-class couple, the Baileys, whom he dubbed "the reason I had entered public service."

Yet outside the public eye, Schumer was one of the biggest beneficiaries of Wall Street money that Congress had ever seen.

Over the course of his career, Schumer has raised half a million dollars from Goldman Sachs - and nearly as much from Citigroup, Morgan Stanley and JPMorgan Chase. Between 1989 and 2010, according to the nonpartisan Center for Responsive Politics, Schumer took in nearly $9 million from the entire securities and investment industry, a haul that helped him become one of the most powerful politicians in America, a deep-pocketed kingmaker with unrivalled connections among the wealthiest players on Wall Street.

The seeming contradiction between Schumer's public posture and his closed-door fundraising efforts had gone little-noticed by the general public before the financial crisis. But when the securities and investment industry was thrust into chaos - and the spotlight - in 2008, Schumer's Wall Street ties suddenly became a political liability.

After all, Schumer's biggest donors were the very folks who President Obama would later, in response to public anger, deem "fat cat bankers." In the years leading up to the crisis, Schumer had been pushed hard to deregulate the financial industry; as the New York Times documented in the wake of the crisis, he had repeatedly protected the industry from oversight and helped companies avoid billions of dollars in taxes and fees.

Full Series: United States of Influence
About the series

Schumer didn't turn his back on his allies. He was one of the major drivers behind passage of the $700 billion bank bailout approved by Congress in the midst of the crisis. The bailout, which spawned the conservative Tea Party movement and was hugely unpopular with the left, was a literal lifesaver for the financial services industry.

But in his public comments, Schumer sought to align himself with the outraged, notably signaling support for tougher regulation, controversial "clawback" provisions that would recover excessive compensation from top executives and the temporary "good nationalization" of some banks, which would have wiped out shareholders and cost top managers their jobs. He hoped at the time that members of the industry would understand that he had little choice but to acknowledge the political landscape. But many didn't see it that way.

"It pissed off a lot of people in the financial industry who thought he had gone overboard, or gone back on his word to them," said New York Magazine political columnist Chris Smith.

It's a frustration that to some extent speaks to Wall Street's insularity. Schumer is a blue-state Democrat who has close ties to a major home state industry that just happens to be disdained by many of the voters he needs for reelection; he has no choice but to walk a careful line when it comes to Wall Street issues, particularly when events thrust them into the public eye.

"In part because he's the senator from New York - there's no question that there are times when he carries the securities industry's water," said Barbara Roper, director of investor protection for the Consumer Federation of America, a left-leaning consumer advocacy organization. "On the other hand, in a crisis he tends to be the investor's friend."

"He can be a swinging pendulum," adds Roper. "But at least his pendulum swings. There are plenty of members of Congress who are bad all the time."

To understand the way Schumer operates, consider his influence with the Securities and Exchange Commission - the agency that is supposed to regulate the largest public companies in the United States. The senator, a member of both the Senate Finance and Banking committees, has been influential in deciding who does and doesn't become an SEC commissioner.

Schumer "got Annette Nazareth her job as commissioner at the SEC," says Lynn Turner, who was the SEC's chief accountant from 1998 to 2001. Nazareth had come from the industry - she had been senior vice president and senior counsel of Lehman Brothers and a managing director of Smith Barney. And while consumer advocates don't view Nazareth as a disaster by any means - Turner says she has done "some good things and some not so good" - they say she is typical of the relatively business-friendly commissioners who tend to be nominated by the White House and approved by the Senate.

With rare exception, "you cannot be named to the SEC if you're an investor advocate," said Roper, who stresses she is not singling out Nazareth specifically. "I mean, it's not even a remote possibility. There is a process that you go through and the industry gets essentially a sign off on who can be considered as an SEC nominee." (The SEC declined comment for this story.)

"Where someone might think that in a Democratic administration you would get appointments of investor advocate types, it doesn't happen," adds Roper. "And you still have this process where industry has in essence veto power over those appointments, and Schumer's part of that."

Yet Schumer has also fought to keep Republicans from cutting funding for the SEC, and he has pushed the SEC to curb high-frequency trading, which experts say has a destabilizing effect. Former longtime Rep. Paul E. Kanjorski, a Pennsylvania Democrat who lost his seat in the 2010 elections, argues that Schumer's industry ties have their upside. Kanjorski, a significant player in the Wall Street reform effort, said that "without his aide and a few others, we never would have gotten as far as to put [a financial reform bill] together."

"You have to understand - somebody's got to speak for New York City and New York State," Kanjorski said. "He's always there to remind us of that. But he's no patsy for them. He doesn't lay down for them. I think he makes a fight on the hard stuff but he doesn't get all disturbed on the small stuff."

After rebelling against Schumer in the wake of the financial crisis, Wall Street appears to have made peace with its longtime ally. That's, in part, a simple acknowledgement of reality. A tireless retail politician, expert distributor of money and canny publicity hound - his outspoken, progressive positions on social issues tend to push his Wall Street ties out of the headlines - the two-term senator and former representative seems unlikely to drop off the political map anytime soon. (He consolidated power during his extraordinarily successful tenure as chair of the Democratic Senatorial Campaign Committee, where he raised a record amount, with the help of Wall Street.) And Schumer's position as an influential member of two Senate committees important to the financial industry gives Wall Street ample reason to stand by him.

"They might try [to replace Schumer], but it would be shortsighted," said Smith, the New York magazine political columnist. "Schumer has been far more friendly than not to the financial industry over the years."

Consider this year's fight over the swipe fees charged to merchants for credit and debit card transactions, which are often passed on to consumers. Wall Street banks lobbied hard to keep Washington from capping such fees, which make them billions in profits every year; on the other side, the retail lobby lobbied on behalf of the effort. (The latter won in a recent, contentious Senate vote, though the banks are taking their argument to the courts.)

Even though he publicly maintained a low profile in that battle, it was clear which side Schumer was on. Bank lobbyists told the Huffington Post that Schumer worked behind the scenes to undermine the effort to cap the swipe fees. Earlier this year, he publicly expressed support for an effort "to at least delay" the legislation. He then voted to do just that.

Asked about that comment, Sen. Dick Durbin, who drove the effort to cap swipe fees, told Huffington Post: "Listen, I know the zip code for Wall Street and I know what state it's in."

Schumer's office declined multiple requests for interviews for this article. In 2009, the senator told Bloomberg News: "When Wall Street comes in conflict with Main Street, I tend to side with Main Street."

According to former SEC chief accountant Lynn Turner, Schumer can be summed up in two words: "Strange duck."

"There are days you love him," said Turner, "and days you want to take him out and throw him in the Potomac."

More from the "United States of Influence" series: