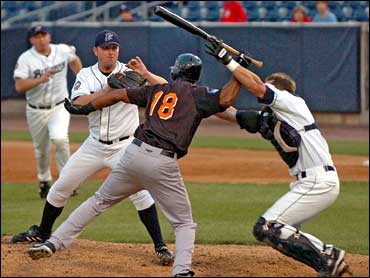 Former major league All-Star Jose Offerman was suspended indefinitely Wednesday, a day after he went wild in the minors and hit the opposing pitcher and catcher with his bat.

Offerman was charged with two counts of second-degree assault — the catcher sustained a concussion and the pitcher had a broken finger. Offerman posted $10,000 bond and was due in Bridgeport Superior Court on Aug. 23.

The independent Atlantic League said it will announce a decision on the 38-year-old Offerman by the end of the week.

Out of the majors since playing for the New York Mets in 2005, Offerman homered in the first inning Tuesday night for the Long Island Ducks. The next inning, he was hit by a pitch from Bridgeport Bluefish starter Matt Beech and charged the mound with his bat.

Catcher John Nathans was struck in the head. He tried to keep playing, but left the game with nausea and collapsed in the dugout, team spokesman Nick Razzette said.

Beech, a left-hander who formerly pitched in the major, had a broken middle finger on his right hand. Both players were treated at a hospital and released.

Shortly before the suspension was announced, Ducks owner Frank Boulton, who also is the league's chief executive, said his team would abide by whatever punishment was handed down.

The league's executive director, Joe Klein, is responsible for dealing with any discipline involving actions within a game.

"I can say that Jose's conduct in bringing the bat to the mound after being hit was wrong, there is no question about that," Boulton said. "We're all saddened by this because Jose has had a 15-year major league career and is a true gentleman."

Boulton noted that the altercation started after Offerman was hit by a pitch.

"The pitcher was ejected because the umpire felt he threw at the batter," he said. "We all know that stuff happens."

"Luckily for Matt Beech, he was agile enough to dodge a bat," Bluefish pitcher Mike Porzio told the Connecticut Post. "But it may have only been John Nathans taking one on the backswing in the head to have saved Matt Beech from really taking one in the face."

The game was delayed about 20 minutes because of the brawl. Long Island went on to win 13-12.