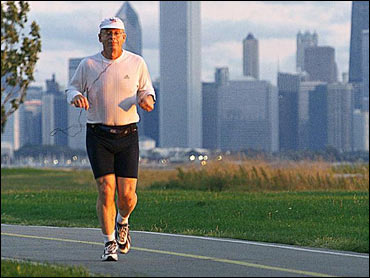 It's not as big or as flashy as the giant Consumer Electronics Show in Las Vegas last month but for 700 tech industry insiders, the Demo 2006 Conference in Phoenix this week is a chance to get up close and personal with some interesting new tech products.

The annual show, which is in its 16th year, is more of a boutique gathering than a trade show. In addition to booths, handpicked product demonstrators take to the stage to show off their wares to an audience made up mostly of venture capitalists, technology press, industry analysts and company officials.

One of the standout products at this year's show is a cell phone service from Sprint and Bones in Motion, an Austin, Texas, company that develops applications for mobile devices. The service, called BiM Active, uses GPS (global positioning system)-equipped Sprint and Nextel phones to track your motion while you walk, run or cycle. It's an application you download and pay for at the rate of $9.99 a month in addition to your other phone charges. It will become available later this week.

To test the exercise tracking phone, I took a 1.1 mile bike ride which, according to the phone, burned 55 calories.

to check out Larry Magid's podcast interview of
Bones in Motion's chief technology officer, Jon Werner.
When you start the application, you have to wait a few seconds for it to hone in on your GPS location. Of course you need to be outdoors with a view of the sky. Then, it starts to record, in real time, your distance, speed, pace, location, elevation and estimated amount of calories burned. You can set it to give you an audio tone at specific intervals such as every quarter mile.

Because it can record elevation, it gives you a sense of your difficulty as you ride, run or walk up and down hills. The phone – which of course knows where you and are when you're exercising – also knows the weather conditions, which helps it calculate a difficulty index.

As I rode around the hotel area, it reported my speed and distance and – based on my settings – made an audible tone every quarter mile. The company offers an inexpensive handlebar mounting bracket on its web site as well as an armband for your phone.

When I returned, I logged into the company's web site to view a progress report, statistics on my ride (such as distance, time, average speed, calories consumed and weather conditions at the time) and viewed my ride on a map.

The mapping is based on Google maps. The company plans to allow users to export the data to Google Earth which will allow you to plot your route on a world map and "fly" through it. As an option, you can post this information on a publicly accessible blog. Click here if you'd like to take a look at mine.

Of course a lot of these features are available from cyclometers and pedometers, including some that offer GPS. The advantages of this service is that it doesn't require a special device. Eventually most phones will have this service, according to Bones in Motion Chief Technology Officer Jon Werner. Unlike standalone GPS devices and most other exercise computers, you do have to pay a monthly fee to your cellular provider.

The product's demonstration got an ovation from the crowd but not everyone was convinced. Conferenza newsletter editor Shel Israel "thought it was cool at first" but then decided, "I already know the terrain I'm running. I don't need a Google map to tell me where I just ran. I tend to know the pace I'm keeping, so I don't need the timer and if I did, my watch works quite well." Israel says that he has no desire to publish his routes and personal times for others to see. "It would only embarrass me," he added.

Still, I can see the application. I always carry a cell phone on bike rides in case of an emergency so now, in addition to letting me talk, perhaps it can help motivate me to stay the course, climb a few more hills and burn a few hundred more calories. We'll see.


A syndicated technology columnist for over two decades, Larry Magid serves as on air Technology Analyst for CBS Radio News. His technology reports can be heard several times a week on the CBS Radio Network. Magid is the author of several books including "The Little PC Book."
By Larry Magid