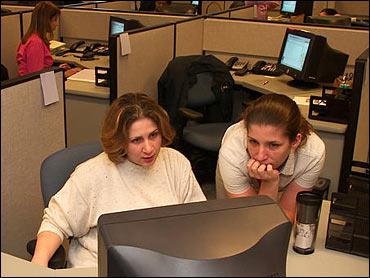 Are you the sort of person who hates to wait in line? Or do you just have to be first with whatever the latest thing is?

You may have to choose which is more important to you, as at least a million people - and possibly many more - are expected to take advantage of Monday's new rule allowing cell phone users to switch carriers without losing their phone numbers.

Critics say wireless companies spent so much time and effort fighting to delay the new rules that their preparations may prove inadequate for the expected torrent of customers wanting to bring their cell numbers to a different carrier.

Wireless companies assert they are ready, having added the systems and staffing needed to make the process of switching carriers run smoothly.

But for an event experts see as a monumental undertaking, most of the carriers did not sign required interconnection agreements or begin extensive testing until the past month.

To switch service for just one phone number, there are "minimally" 11 transactions or handoffs of information between the two carriers, and that's just to "port" a single phone number, explained Helen Harris, spokeswoman for TSI Telecommunication Services Inc.

TSI, based in Tampa, Fla., was hired by five of the six national cell companies to serve as intermediary for the process. The company has brought in 200 additional workers to handle the expected workload for verifying information and troubleshooting problems between carriers.

Similarly, carriers such as Verizon Wireless and T-Mobile have opened new facilities with hundreds of new hires to deal specifically with the new process.

At least one cellular carrier, Sprint, encountered major technological problems during multi-carrier tests last week, two industry sources told The Associated Press. Sprint characterized the problem as no more significant than any other carriers have encountered during testing, and said it has since been fixed.

Earlier this month, AT&T Wireless was temporarily unable to activate tens of thousands of new customers because of a glitch in software that was designed to help sales and customer service representatives handle inquiries related to the new phone number rules.

Regardless of preparations and testing, the biggest wild card simply may be how many people seek out the switch on Monday.

"Industry estimates have varied widely. We've heard estimates as high as 9 million on day one. We believe it will be more in line with 1 million, and we have engineered our systems to handle more than the anticipated volumes," Harris said.

But if the number of requests approaches millions, she said, "It's reasonable to expect some hiccups on day one with an implementation of this magnitude."

Although the Federal Communications Commission has set a target of 2.5 hours for carriers to complete the transfer of a number to a rival, experts and most of the companies say the process is likely to take at least a day at first.

Martin Dunsby, an analyst with the consulting firm inCode Telecom Group, said that it could take weeks before the process is "seamless and speedy" and that problems will persist much longer.

Other glitches may depend on whether carriers intentionally impede the process when they lose a customer.

"Some carriers will be quite particular with information," said Sprint spokeswoman Jennifer Walsh. For example, she said, a carrier may hold up the process if customer abbreviates a word in his address such as "street" as "St" while it appears as "St." on the old carrier's bill.

Many people lured to new carriers by sweet promotions and rosy promises about service may be disappointed once their switch goes through.

In fact, Dunsby predicts a reverse flood of requests by customers wanting to move their numbers back to their old service.

"In six weeks, we may see a big un-port," he said. "I think it'll be a grass-wasn't-greener effect."