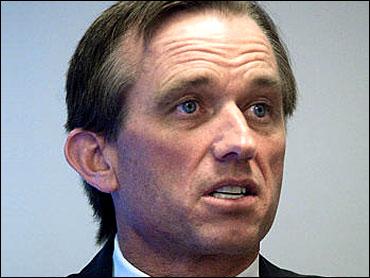 The rich and famous have long flocked to the beaches of Cape Cod and the island seclusion of Martha's Vineyard and Nantucket — a land of sailboats and quaint vacation homes.

Now some of these celebrities want to make sure wind turbines don't become a part of the scenery.

They are fighting a proposed $700 million wind farm in the Nantucket Sound that would provide electricity to thousands of homes in the area, saying the giant turbines will mar the landscape of one of the nation's most pristine areas.

Pulitzer Prize-winning historian David McCullough recently jumped into the fray and can now be heard on one-minute radio spots decrying the project.

"I'm not against wind turbines," said McCullough, who has been a full-time resident of Martha's Vineyard for 30 years. "I'm against 130 of them over 400 feet tall right smack in the middle of one of the most beautiful places in America. That's a hundred feet taller than the Capitol dome in Washington."

Cape Wind Associates, the private company that is currently seeking a federal permit for the project, wants to put up 130 turbines in Nantucket Sound in what would be the nation's first offshore wind farm.

The turbines — 420 feet tall — would be located about 3 miles off the coast and supply close to three-quarters of the electricity used on Cape Cod and the islands of Nantucket and Martha's Vineyard.

The farm's proximity to exclusive summertime playgrounds of Nantucket, Martha's Vineyard and Cape Cod has bred the familiar "not-in-my-backyard" charges from officials at Cape Wind Associates.

McCullough points out that he has no view of the Sound from his home and that he has become involved in projects far from his back yard. He helped derail Disney's proposed Civil War theme park near a Virginia battlefield a decade ago.

"I feel strongly about preserving the unspoiled places in America, no matter where they are," McCullough said. "That Sound, that beautiful place out there ... is not just the back yard of those of us who are blessed enough to live in this part of America, but to some 5 million people who come here from all over the world."

The wind farm has received mixed reviews from local residents, who have seen the project evolve into the hottest topic of the summer.

"It's good to see people talking, people active, people involved," said Erik Albert, innkeeper at Martha's Vineyard's Oak Bluffs Inn, which is a five-minute walk from the Sound. As for Cronkite and McCullough, Albert said, "They are valued members of the community here and their opinions hold a lot of weight."

Cronkite, who has sailed in the Sound and owns a second home on the Vineyard, appeared in a television advertisement in opposition to the project earlier this year.

Opponents of the project say they are in favor of renewable energy, but just don't believe it should be allowed in this body of water at a time when there is no federal licensing process for this type of development on the ocean's floor.

"We are environmentalists and we believe something has to be done societally to boost renewable energy, but we think it has to be done responsibly," said Isaac Rosen, executive director of Save Our Sound.

Because Cape Wind is proposing the project in federal water, states have no power to stop it. Supporters argue that at least 17 state and federal agencies, led by the Army Corps of Engineers, are reviewing the project. A draft document outlining the environmental impact is expected as early as September, with a decision on a permit as much as a year away.

Save Our Sound officials argue that prominent voices can help put the roiling debate into a new focus. They also point out that there are many working-class residents who oppose this project, based on its potential impact on the fishing industry and marine life.

"You get into these pitched battles and it's hard to step outside of that and look at it from a fresh perspective," said spokesman Ernie Corrigan. "David McCullough is saying that there is nothing wrong with taking an aesthetic view of this project and asking whether it is worth all of the trade-offs."

Rodgers argues that the participation of privileged island residents could actually backfire.

"I think it is obvious to a lot of people as a not-in-my-backyard, entitled view," he said.