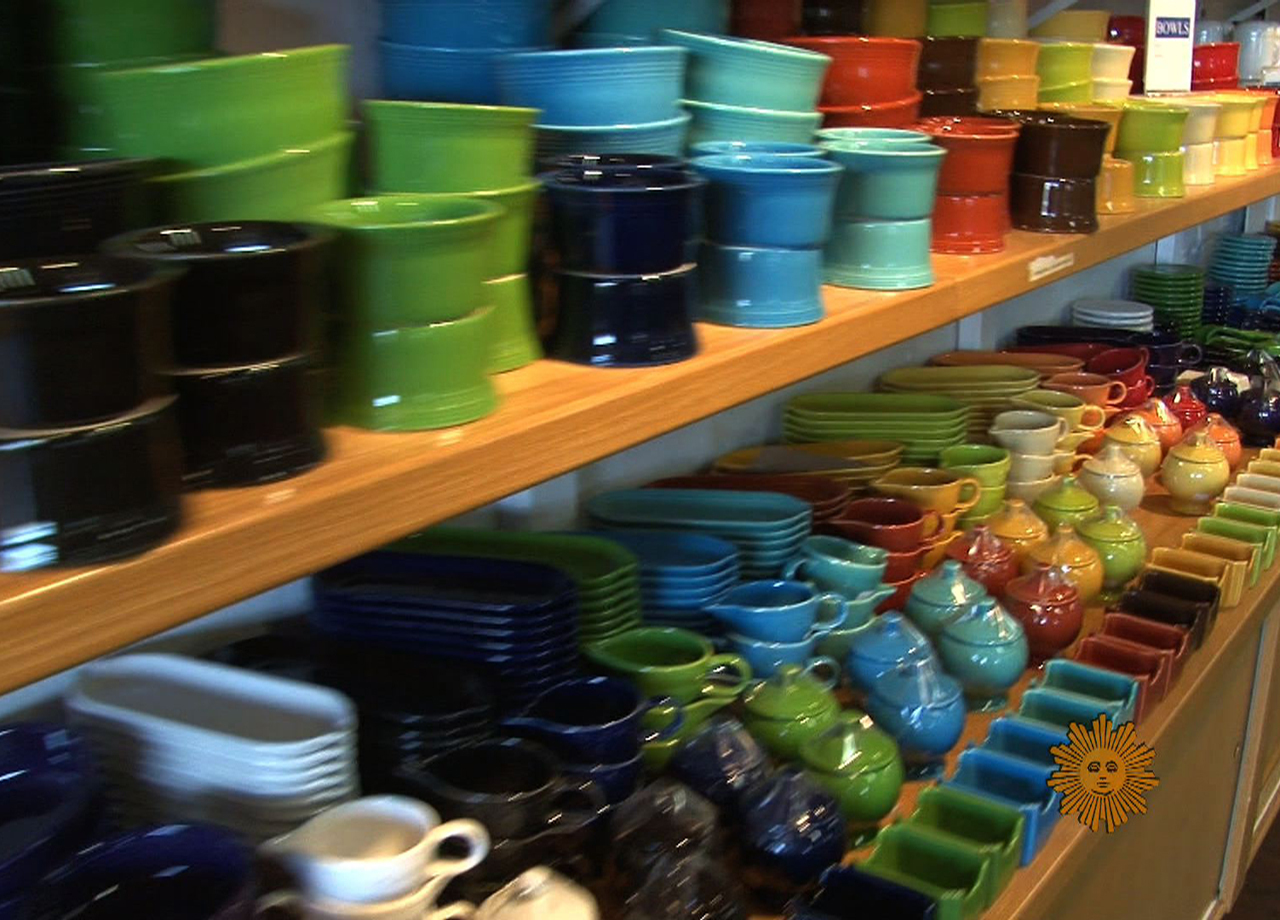 Elaine Quijano tells us about the distinctive dishes made by a family-owned company in America, forged in a time of hardship:

When we look back on the Great Depression, we tend to picture it in black and white. The soup-lines, the closed-up shops, the shanty-towns - all just shades of gray in our collective memory.

So it's a bit surprising that in the midst of that drab time, a rainbow of color flooded into homes across the country, when an iconic piece of Americana - Fiesta dinnerware - was born.

Joseph Wells III is President and CEO of the Homer Laughlin China Company, a pottery business his family has owned since 1897.

It was his grandfather, William Wells, who in 1936 thought America's spirits needed a boost.

"He went to our designers and said, 'This is what's going be good for the Depression: People need to brighten up their table, people need something to be happy about,'" Wells said. "And that's how Fiesta got started."

Even in those troubled times, it was a hit - inexpensive plates, cups, bowls, and accessories in colors worthy of a crayon box.

Seventy-six years later, Fiesta ware is a fixture on dinner tables across the country. It's a favorite on bridal registries, and has inspired a legion of collectors. "I probably have 50, 60 pieces at home," said one. Just started buying it, loved it, and bought more. My kids love it. All the colors are fun and festive."

It's been described as "an explosion of color" that makes you happy. It is, yes, a fiesta!

Few collectors are as passionate as Richard Mayberry of Southport, Conn. He started collecting in the early '90s after his mother's death, when he came upon a plate in an antique shop.

There are people who have made shrines out of their house to display their Fiesta ware. Quijano asked Wells, "Does that surprise you?"

"Yeah, we're just talking about a little bit of mud here, that we've happened to toss together

But at Fiesta's sprawling factory on the banks of the Ohio River in Newell, West Virginia, that "mud" is transformed into something beautiful, in much the same way it was back in 1936 - by hand.

In what used to be the pottery capitol of America, Homer Laughlin is the last big company standing, as countless others have fallen to cheap foreign imports. For fourth-generation owner Joseph Wells, keeping his factory open is about honoring a commitment to generations of Fiesta lovers, and to his community.

"I remember sitting around the dining room table with my grandfather and my father, and my grandfather and father were talking about providing jobs in the upper Ohio Valley, and that was their goal, to provide jobs for the people that live here," Wells said. "And I kind of think that's a nice goal to have."