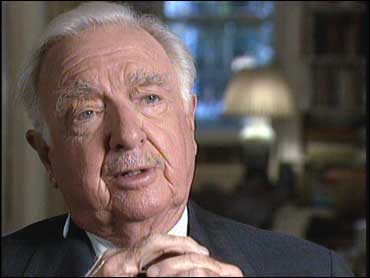 It is the rare "celebrity" who is as reverentially talked about by Mike Wallace and Bill Clinton as by George Clooney and Robin Williams. Walter Cronkite, now 90 years of age, fits that bill.

The iconic newsman's colleagues and friends will celebrate his professional and personal lives in a one-hour primetime special broadcast on the CBS Television Network.

CBS News colleagues Don Hewitt, Dan Rather, Morley Safer and Wallace take viewers behind the headlines that Cronkite masterfully reported to reveal the professionalism, dedication and extraordinary influence of the man they knew so well.

Competitors Ted Koppel, Diane Sawyer and Barbara Walters, as well as the newest generation of anchors, Katie Couric, Charles Gibson and Brian Williams, talk about the unique role Cronkite played in American culture and how he continues to influence them today.

But, lest viewers think "the most trusted man in America" was one-dimensional and singularly obsessed with the news, some of Cronkite's personal friends, including actor/comedian Williams, actor/director Clooney and Grateful Dead drummer Mickey Hart, as well as President Bill Clinton and filmmaker Spike Lee, share poignant personal thoughts and revealing recollections of the newsman's "other side."

Of Cronkite's unique journalistic abilities, Koppel said, "There is no way you can analyze it. You can't send it out to "CSI" and say, 'all right, look at the DNA of Walter Cronkite and how do we replace that or replicate it?'"

"He had to take a moment, take off his glasses. When that happens, you realize a whole nation can't speak," said Robin Williams.

Says Couric, "He handled it as a human being first and an anchorman second, and I think, in times like that, that's what you want."

"It was a very frightened country. Walter became not only everybody's anchorman, he was everybody's minister, priest and rabbi," said Hewitt. "He calmed America down."

"I think that the day President Kennedy died was the day that television news as we now know it was born, for all intents and purposes," said Dan Rather. "And Walter Cronkite was a very important part of making it so."

Of Cronkite's coverage of the civil rights movement in the 1960s, Lee said, "Walter was one of the few people in power positions that got behind that and pushed the story. In Birmingham, Ala., 1963 ... four little girls were murdered. ... The fact that it was four little girls, the fact that it took place in a church, on a Sunday, that really shook people up. America needed to look deep into itself, and this is one of the pivotal moments."

On Cronkite's coverage of the Vietnam War:

"It pained him to have to say what he thought about Vietnam, but he also understood how isolating the White House can be and how people can get to the point where they don't hear discordant voices," said Clinton. "And he thought he knew what the truth was, and he thought he had an obligation to tell it."

"He changed the history of the war overnight because it was, for that time period in general, a young person's protest. And it became everyone else's wrong war at that point," Clooney said.

Says Safer, "It is...remarkable that one anchorman, one reporter, one journalist ... could really affect the political fate of the country...but they didn't call Walter the most trusted man in America for nothing."

Of Cronkite's coverage of the space program and man landing on the moon, Couric said, "Here was something everyone could rally around, and I think Walter Cronkite's embrace of that program gave people American heroes at a time when they really needed them."

And of Cronkite's "other" side?

"I invited him to a Grateful Dead show .. .and it was Walter Cronkite at the soundboard at Madison Square Garden," said drummer Mickey Hart. "And he came back at halftime and I introduced him to Jerry [Garcia], and he said, 'I was thinking of a thousand reasons to leave early. But I can't think of one now!' "

"The best time to be with Walter is when he ... was with [his late wife] Betsy," remembers Robin Williams. "You know and one cocktail ... because they both get kind of wonderfully salty and funny."

Williams adds, "To see him conducting the orchestra ... that was a great thing to see. That was another skill he had [that] I didn't know [about]. If, all of a sudden, he put on skates at that moment, I'd go, 'OK, a double axel.' [In Cronkite's voice:] 'I think I can do it. It seems appropriate.'"

Clinton and Clooney, perhaps, put it best. Clinton said, "He's a truly wonderful man, an old-fashioned gentleman, but a ferocious, ferocious citizen. He cares about things still." Clooney adds, "Every once in a while, you get someone who is the exact right person at the exact right moment. In fact, I think we were just very lucky that it happened to be him."
View CBS News In
CBS News App Open
Chrome Safari Continue
Be the first to know
Get browser notifications for breaking news, live events, and exclusive reporting.