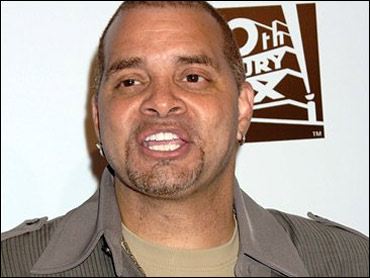 Comedian Sinbad is out of the picture after the two teams on "Celebrity Apprentice" held charity events Sunday to sell Kodak products and promote "Kodak Moments."

Sinbad was project manager of Rocksolid, the losing men's team, and he took rocker Bret Michaels, last week's project manager, and former Ill. Gov. Rod Blagojevich into the board room with him.

Trump said Blagojevich didn't belong there and seemed surprised by what he called Bret Michaels' self-imposed time out." But in the end, he relieved Sinbad of his duties.

Sinbad's parting words to his colleagues? "Throw' em under the bus," he said as his taxi sped down a New York street. "Don't be a nice guy. Throw 'em under the bus."

In another-two-hour episode, the two teams were told to run a Kodak storefront and organize a promotional event to draw in the crowds. The winning team was chosen by the Kodak executives.

The women's team, led by WWF's Maria Kanellis, chose a red carpet theme. They invited shoppers to have their pictures taken with singer Cyndi Lauper, then learn about Kodak products before picking up their completed picture at the printers.

The event seemed chaotic; crowds gathered around the printer searching for photos and the lights kept going off as the machinery blew circuits. But in the end, shoppers went home with their pictures and were exposed to a wide range of Kodak products.

Sharon Osbourne lost a day to sickness and provided some funny moments as she, sneezing and wheezing, handed out bottles of water and cupcakes.
The reaction of some members of the women's teams to Lauper's seemingly loopy behavior promises some fun in future episodes.

Fireworks started almost immediately in the men's group. Sinbad had trouble delegating and most team members had to find their own tasks to do. Michaels kept asking for a chore and when he was ignored, disappeared for while. Blagojevich was distracted by phone calls about his legal problems.

The men chose to highlight their own Kodak moments and invite shoppers to have a picture taken with each. A shopper could stand behind the microphone with Michaels, stand with a bat next to former Major Leaguer Darryl Strawberry and chop up veggies in an apron with celebrity chef Curtis Stone.

Instead of printing out pictures, the men handed out papers listing a web site where shoppers could download their own photos. They had a table of Kodak products but no one manning it.

In choosing a winner, Kodak execs cited the men's failure to push Kodak products and the failure of some shoppers to get the web address or to find their photos at that address.

Blagojevich provided most of the levity for his team, first when he was mistaken for entertainer Donny Osmond and later when he mumbled a it's-not-true response to a passerby who said to him, "Enjoy prison."